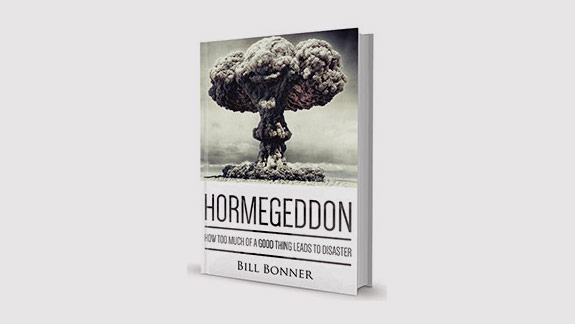 Hormegeddon: How too Much of a Good Thing leads to Disaster
By Bill Bonner
Lioncrest Publishing USA
Review by Ashok Jainani

Economics is full of numbers because numbers are a good thing to astound, excite, influence, impress and sway people and their minds. Because of their own education and training that is further from math or science, the majority finds math very impressive. By comparison, the words are sloppy, vague, subject to misinterpretation. We understand the world by analogy, not by digits.

But in economics, we reach the point of diminishing returns with numbers very quickly. They gradually become useless. Later, when they are used to disguise, pervert, and manipulate, they become disastrous. Bill Bonner, famed author of The Daily Reckoning report has framed a law: In the hands of economists, the more precise the number, the bigger the lie. He writes an insightful and entertaining copy, day after day, with impossibly witty style for so many years. In Hormegeddon, Bill continues that amazing track record, delivering page after page of informed, insightful, frequently challenging, sometimes harsh and very humorous writing.

Governments and central bank planners fail because of their belief in three things that aren’t true. First, they think they know the exact and entire present state of the community they are planning for like their wants, desires, hopes, capabilities and resources; second, that they know where the community and the nation ought to go; third, that their models based on complex numbers are capable of creating the future they want.

The central theme of the book is based on the law of diminishing returns. If you add a little bit of poison to yeast, the yeast grows better. This is “hormesis”: A little of something is good, but if you add a lot of it, that extra may not be just bad, but can also be disastrous and lead to extremely unrelated and undesired consequences, especially in public policy, the entire book Hormegeddon is all about. You need food every day, but if you eat too much, you could get fat and develop diabetes or heart trouble…

“Hormesis,” is what happens when a little of something thrills, but too much of it kills. The title of the book is a portmanteau coined by the author is a combination of Hormesis (the biological phenomenon of small doses of something being good for an organism while large doses are damaging or fatal) and Armageddon. The meaning being that our civilization suffers from too much of many good things and is headed for a catastrophic correction, if not complete collapse.

Bill Bonner examines a serious problem, he finds running through history and modern society. In his lively and engaging style, he sets forth to expose the lies, misunderstandings and ideologies he says have repeatedly ended up in governmental errors and financial crises and colossal loss to the society.

After reading this book, you may understand how economic numbers and also the policies get manipulated to forcibly bring changes in people’s behavior in extraordinary ways. Preparing for the future gets easier when you understand these hidden relationships. You may learn why some governing works just fine and why some doesn’t at all and how people get conned by the government, every single day.

Early stage societies tend to be robust and efficient. Later, additional complexity degrades returns on investment. This complexity may be described as a form of problem solving, but is better understood as an attempt by elite groups, the one-percenters, to hold onto their wealth and power. A good debt financed instrument brings forth a revenue stream – a result that justifies and pays for the investment. The marginal utility of debt declines sharply when you begin to use it for everyday spending