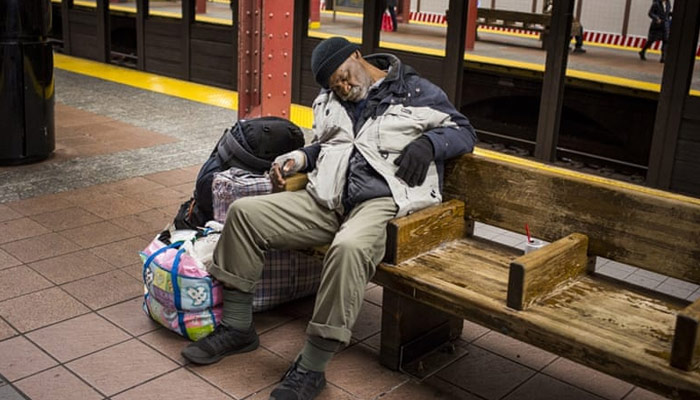 (In my column last month, I wrote of New York’s wealth and pleasures: Fifth Avenue, Central Park, art and architectural treasures, block after block of luxury apartment buildings and luxury stores. But New York, like every other city, has a less happy side to it. Let me share with you my experiences with the homeless and prisoners.)

For thirteen years, on Wednesday evenings, I was the driver for the Coalition for the Homeless downtown food van. We begin by handing out food to the homeless outside St. Bartholomew’s Church at East 51st Street and end at the southern tip of Manhattan.

My fellow volunteers and I gathered at 7p.m. We were a diverse lot. A writer (Suketu Mehta, author of “Mumbai, Maximum City”); designer, playwright, and lawyer (me). The van was filled with containers of hot chicken- vegetable soup, bagels, milk and oranges. Enough to feed several hundred people. We proceeded down Park Avenue in the van, passing the elegant Waldorf-Astoria Hotel and skyscraper headquarter buildings of major corporations. Our first stop is at 35th Street by the East River, not far from Bellevue Hospital.

Here, every night of the year, homeless men and women gather. They are here in the freezing cold of winter, with strong winds whipping off the dark waters of the East River, and on sizzling humid summer nights when no breeze stirs. On the long line are the fragile and sturdy, young and old, lively, and those with far away looks.

For the frontispiece of his book,”Down and Out in Paris and London,” George Orwell selected this line of Chaucer: “O scathful harm, condition of poverte!” Orwell writes with passion on “The evil of poverty” which he was experiencing at this point in his life. It “is not so much that it makes a man suffer as that it rots him physically and spiritually….”

Orwell is not overly fond of benefactors, with one exception: “He [a young clergyman] was shy and embarrassed, and did not speak except for a brief good evening; he simply hurried down the line of men, thrusting a ticket upon each, and not waiting to be thanked. The consequence was that, for once, there was genuine gratitude….”

I had recommended to the Coalition’s executive director that she read the Orwell book. I was immensely touched when she wrote in the Coalition’s newsletter that seeing me working on the line brought to mind the person described by Orwell. Touched, but not so sure she was right, since, unlike him, I am a bit of a chatterbox. I remember one night encountering a man on the line carrying a book.”What are you reading?” I ask. He shows me the cover: “The Transit of Venus” by Shirley Hazzard. I say to him, “Shirley is a friend. She will be so pleased that you are reading her book.” He smiles with deep pleasure and Shirley was delighted when I told her. Less so the men waiting in line who were grumbling about my slowness.

We continue on our way along the FDR Drive. Ahead, one of my favorite New York City views, night or day, the magnificent Manhattan and Brooklyn Bridges, side by side, spanning the East River.

Coming off the FDR Drive, I take the van to a parking lot on Centre Street. Here are found the three city courts serving poor people: Housing Court, where landlord – tenant disputes are heard, often leading to evictions since few tenants have legal representation; Family Court, for domestic violence and child abuse cases, and Criminal Court, where criminal proceedings commence.

I call the area,”Place of Sorrows.”

The homeless wait for us in line, joined by a group of grandmothers living in nearby Chinatown. They are there to obtain food for their grandchildren. The grandmothers serve both as caregivers and foragers.

Our last scheduled stop is the Battery at the foot of Manhattan. This is where the city began as New Amsterdam in 1625. It is very cold in winter, with piercing winds coming off the harbor waters. After being served, some of the homeless men and women return to the ferry building where it is warm, or spend the night traveling back and forth on the ferry boats.

I lead a small group across the street to number 6 Pearl Street, the birthplace of Herman Melville, author of “Moby-Dick” and the short story set in Lower Manhattan,”Bartleby The Scrivener.” Melville writes movingly of the homeless Bartleby: “Immediately then the thought came sweeping across me, what miserable friendlessness and loneliness are here revealed! His poverty is great; but his solitude, how horrible!” Melville concludes his story with these words: Ah Bartleby! Ah humanity!

We have given out all the food. I return the van to a parking lot and go home to my warm apartment on the Upper East Side. I am delighted to be home.

Dickens wrote of “David Copperfield” that “Of all my books, I like this the  best.” (And it is my favorite.) At age ten, David finds himself homeless: “Never shall I forget the lonely sensation of  first lying down, without a roof above my head! Sleep came upon me as it came on many other outcasts, against whom house-doors were locked, and house-dogs barked,that night….”

David finds refuge in the country cottage of his great- aunt. As he sinks in gratitude and rest upon a bed with snow-white sheets, he remembers all the solitary places under the night sky where he had slept, and “prayed that I never might be houseless any more, and never might forget the houseless.”

(At present, there are 60,042 men, women and children living in the city’s municipal shelter system. In addition, 3,182 New Yorkers live unsheltered on city streets, on subways, and elsewhere.)

The world of prisoners and guards, of high walls, barred windows, locked cells and fences topped with gleaming razor wire, has been familiar to me for decades through my work as a board member and former chairman of the Correctional Association of New York, a non-profit organization formed in 1844 whose members are authorized by the Legislature to visit state prisons and report on conditions.

Prior to visiting a prison, I recommend to colleagues that they read Oscar Wilde’s poem, “The Ballad of Reading Gaol.” (In 1895, Wilde had been sentenced, following his conviction for committing indecent acts, to two years in prison at hard labor.) Prison life has not changed all that much since his day.

The shuffling of feet as prisoners march to and from their cells. Prisoners standing behind bars in their cells silently gazing into the corridor. Others on their beds stare at the ceiling. Spirits are low. (“Something was dead in each of us, /And what was dead was Hope.”) Life is harsh. (“And never a human voice comes near / To speak a gentle word.”) Loneliness and isolation. The achingly slow passage of time.

On the day of his release from prison, Wilde left for France. He never returned to England and never again saw his wife and two sons in the remaining 3 1/2 years of his life. Wilde began writing “The Ballad of Reading Gaol,” the last poem he was ever to write, two months after his release. The early editions were not published under his name; rather, under “C.3.3”, his cell number at Reading Gaol.

I never saw sad men who looked
With such a wistful eye
Upon that little tent of blue
We prisoners called the sky,
And at every careless cloud that passed
In happy freedom by.
With bars they blur the gracious moon,
And blind the goodly sun:
And they do well to hide their Hell,
For in it things are done
That Son of God, nor son of Man
Ever should look upon!

At one time Wilde had criticized Dickens for being too occupied with social issues in his writing. Two years in prison had changed Wilde’s perspective.And what have I learned from my prison visits?

The United States, with more than 2.2 million inmates in our prisons and jails, excessively imprisons, and the sentences imposed are far too long. Prison should be the last resort for lawbreakers and prison sentences fair. Addictions and education and employment needs must be vigorously addressed. We need a new way of living where there will be less poverty in our society and less violence and destructive behavior. We need a new way of forgiving where prisoners returning to society are treated, not as pariahs, but welcomed as prodigal sons and daughters.

On a visit to Sing Sing, a New York State maximum security prison on the banks of the Hudson River, I attend an inmate performance of the musical, “West Side Story”. The eloquent words of librettist Stephen Sondheim, sung by prisoners performing in the production in an auditorium filled with prisoners, provide a beacon of hope to everyone present, and beyond:

(Rikers Island is a complex of several New York City jails. About 60,000 people spend some time there in the course of a year, most awaiting trial. In 2015, 9,424 penalties for fights and assaults were issued by guards and the use of physical force by officers increased by 17 percent to 4,409 confirmed episodes. Rikers is a dramatic example of a deeply troubled prison system.)