Syria, a simmering 2008 for the markets! 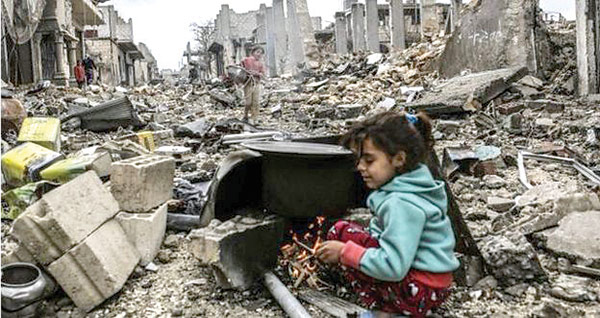 Let us come to the conclusion beforehand that the US and Russia will never get along. As a result the world will never be a safe place which has long ignored the skirmish between the two most powerful nations over Syria. Tensions have already become increasingly heightened between Washington and Moscow. It seems no one is really interested to resolve the Syria conflict, which after derailing some European countries might culminate in World War Three. The proxy war has already polarized the world. Russia and the Western powers were in fact allies when they unitedly took the position to end the conflict in Syria and finish the commonly hated enemy Isis. Very soon the two drifted apart and the upmanship game the Russian President Vladimir Putin is playing might prove too risky and dangerous.

There was some temporary Syrian ceasefire, negotiated between the US and Russia, which was declared extinct after the destruction of a UN aid convoy near Aleppo, which the US blamed on Russia, and Russia vehemently denied. In fact, just two days back US planes had struck a Syrian army base, killing 62 soldiers. The US eventually admitted a regrettable mistake, but the damage had been done.

Now in a show of strength US and UK have warned Russia and its ally the Syrian government that new economic sanctions could be imposed if the bombing of Syria’s besieged Aleppo continues. Every day the Britain-based Syrian Observatory for Human Rights releases the data and not a single day has passed without the casualties of civilians, including children. Air strike has one target – destruction. On the other side US-led coalition is active in Iraq, helping Iraqi and Kurdish forces, trying to retake Mosul city from the Islamic State group. But, opponents of Bashar
al-Assad doesn’t want to be in another Middle Eastern war. Like it had happened in Iraq, there is also no guarantees that bringing down Assad will resolve the conflict as another civil, and proxy war could take over. That means there is presently no end in sight.

But the warring groups are forgetting that there is intense public sympathy for those who are besieged in the war-torn zone. And the best course of option right now for all the peace loving people is to focus on ways to bring humanitarian relief. This is high time the world community raises its voice against both of them. History will not forgive if India goes to the extent of giving Russia a silent support.

According to the United Nations High Commissioner for Refugees, almost 5 million Syrians have fled to other countries. In the second presidential debate, Republican presidential nominee Donald Trump called for “extreme vetting,” of the Syrians, saying, “I don’t want to have — with all the problems this country has and all of the problems you see going on — hundreds of thousands of people coming in from Syria when we know nothing about them.” In this politically charged atmosphere it is hard to think that Syria will prove to be just another Afghanistan.

The war in Syria, apart from other surrounding areas, has caused civilians to flee and seek shelter in Europe. Although the EU has a systematic quota plan to accommodate most of the refugees, some nations have been reluctant to absorb them. In the UK, it was one of the major points that led to Brexit. Half of the voters were convinced that migrants in general and refugees in particular are taking up a lot of jobs. Specially, the working class agreed with this view and responded in favor of the motion.

All these developments have pushed the IMF and WTO to come out with warnings that a world-wide economic stagnation is certain. The IMF has warned that a combination of low growth, high debt and weak banks could push the world in a dangerous financial and political direction that could turn into even recession. It also fears Europe could send globalisation into reverse hitting international trade, investment and migration. The other spill over could be the oil prices. Analysts claim that demand is catching up and it can spike to over $70 a barrel, which in turn will push inflation to jump off the charts. Economic Data released by almost all the reliable agencies are indicating that maybe the U.S. market is not the only one that is making headway, but warning signs that a recession is probable in 2017 are making even the most optimistic of the economic corps take a step backward. Poor economic data, coupled with a falling corporate earnings will undoubtedly translate into lower valuations. Wars come hand in hand with ballooning budget deficits.

There is something called the butterfly effect which says that even small events can have a momentous impact. And the situation in Syria and surrounding areas have full potential to cause a butterfly effect. If it happened, Syria could prove to be another 2008 for the markets.