Venice: “A City for Beavers” 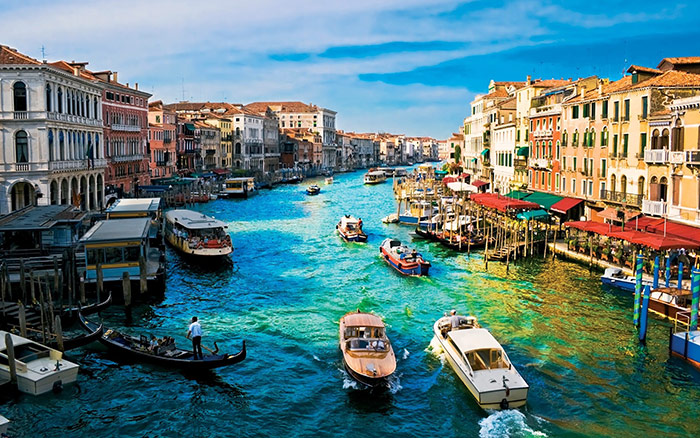 I recently spent eleven days in Venice.
New York and Venice, both island cities. New Yorkers may not think themselves an island people, but only the Bronx and a tip of northern Manhattan form part of the North American mainland. The rest of us live on islands. For me, the most dramatic and beautiful feature of our skyline is not tall buildings, but the magnificent bridges linking island to island, and islands to the mainland.

Venice is a city of hundreds of islands linked by stone bridges. It is small and fragile, covering only 1,800 acres, with a resident population of about 56,000. New York is large and robust with a growing population now at 8.3 million. The city covers an area of 305 square miles.

Venice provides me with the relaxing pleasures of a shipboard cruise without the unpleasantness of rolling seas and physical confinement.
In Venice, residents of all ages are keenly aware of the tides. This is not surprising, given the city’s unusual setting:

There is a glorious City in the Sea.
The Sea is in the broad, the narrow streets,
Ebbing and flowing; and the salt sea-weed
Clings to the marble of her palaces.
(Samuel Rogers)

Sirens wail to warn Venetians of impending high waters, acqua alta, from the Adriatic Sea. Life in the city comes to a halt, like New York during a snowstorm.
In low-lying areas, such as the Piazza San Marco and the Zattere where I stay, raised wooden walkways are put in place. Every Venetian owns a pair of high rubber boots. And you need them! Coming down stairs for breakfast, I have found the lobby floor of my pensione under water.

New Yorkers are impervious to tides. Few realize, as we walk along city streets and avenues, that each incoming tide brings 260 billion cubic feet of ocean water surging through the Narrows beneath the Verrazano-Narrows Bridge into the Upper Bay and along the shorelines of this city of islands.

The church bells of Venice converse with one another.
The evening vesper bells of the Gesuati begin the exchange. Those of Sant’ Eufemia and the Redentore on the Guidecca then join in. They awaken from slumber the bells of Santa Maria della Salute on the Grand Canal. One by one the bells disengage from the exchange, leaving those of the Salute with the last word.
At noon, the Grand Canal is as busy with motorized traffic as midtown Fifth Avenue, and the tourist sites are as crowded as any Fifth Avenue sidewalk.
Venice and New York are splendid walking cities. How Walt Whitman, who knew every street of the two cities he inhabited, New York and Brooklyn–the two cities became one in 1898–would have enjoyed Venice. “The blab of the pave” entranced him, seeing “forever faces.”

In Venice I enjoy revisiting favorite paintings. At San Francesco della Vigna I admire “Virgin and Child” by Antonio da Negroponte and sit in the 15th century cloister. At San Giovanni Battista in Bragora, I find Cima’s “Baptism” thrilling, illuminating as it does the church interior with its spring morning scene in the Dolomites. At the Gesuati, I revisit G. B. Tiepolo’s “Virgin and Child with Saints,” enjoying the scene-stealing chaffinch perched on an arcade cross-bar by the figure of Mary. Tintoretto’s “Presentation of the Virgin” is at the Madonna dell’ Orto, his parish church where he is buried, located in the Cannaregio district. Hugh Honour, in “The Companion Guide to Venice,” describes the painting as “the child Virgin silhouetted against the sky,” representing “the Hope of Humanity.”
The founding of Venice was extraordinary. In the 5th century, Attila the Hun swept down the peninsula. Writes Mary McCarthy in “Venice Observed”, “refugees, fleeing from him on the mainland, sought safety on the fishing islets and began to build their improbable city, houses of wattles and twigs set on piles driven into the mud, ‘like seabirds’ nests, ‘wrote Cassiodorus, ‘half on sea and half on land’….”

From this humble start, over a period of centuries, Venice achieved great power status. Three events precipitated her downfall: The fall of Constantinople to the Ottoman Turks in 1453, endangering all her Mediterranean possessions; the discovery of the Cape route to India by Portuguese navigators, a fatal blow to Venetian commercial supremacy in East-West trade; and the uniting of Venice’s enemies to partition her mainland possessions. By 1797, when Venice fell to Napoleon, she was a shadow of herself.

About 6:45 each morning, tugboats head out to the lagoon entrance to meet cruise ships arriving from the Adriatic Sea. The tugs pass by my window. I recognize the sound of their engines–deep-throated, as befits their size, strength, status and responsibility. They are my Venice alarm clock, reinforced by the ringing of church bells at 7 a.m. The tugs return guiding immense cruise ships–a tug positioned at bow and stern–to the maritime station. Additional tugs guide out-bound ships to the Adriatic. Over the years, I have written-down tugboat names. Favorites from the past: Hippos, Validus, Maximus, Strenuus, Squalus. (Note all have Latin names.)

Gazing on this scene from the windows of my room,
I am reminded of the English painter, J.M.W. Turner. He annotated the backs of several of his Venice watercolor studies with notes conveying the excitement he felt in being the temporary possessor of the lagoon views he had from his hotel room.
For three days running, I arrive at 4:30 p.m. on the island of San Giorgio Maggiore. There I sit on the embankment, leaning against a stone bollard, absorbing glorious views of Venice: The Dogana (Custom House) across the sparkling waters of the lagoon; the basilica of Santa Maria della Salute at the entrance to the Grand Canal; the Doge’s Palace; the Campanile, crowned by the Golden Angel who so enchanted Proust on his visits to Venice.

I watch car ferries from terra firma (the mainland) on their way to the Lido and cruise ships, some eleven stories high, dwarfing all structures in Venice except the Campanile. (If a tug line were to snap, the vessel would slice through the Piazza San Marco like a knife through butter.)

The sun descends behind the domes of the Salute. I rise to enter the Palladian church of San Giorgio Maggiore. Votive lamps and candles of the faithful provide the only illumination. A few figures move about the immense interior. I walk to the altar. To the right is Tintoretto’s “Last Supper,” painted by him late in life. Professor David Rosand, in his book, “Painting in Cinquecento Venice: Titian, Veronese, Tintoretto,” writes of the work as the “close of all the indefatigable master’s efforts to depict this significant moment of human history, this immemorial love-feast of Christ and his disciples.” Here I come upon another painterly scene-stealer, a cat cautiously peering into a basket by the table of the Last Supper, unaware of the drama feet away.

A few years ago, my role in Venice changed from that of visitor to civic participant. For reasons not explained, the Redentore, a Palladian masterpiece on the Giudecca, had been relegated by officialdom to darkness at night, no longer being illuminated.
On returning to New York, I wrote a letter comparing this act to extinguishing the illumination of the Empire State Building or the Statue of Liberty. New Yorkers would not tolerate this. Nor should Venetians tolerate the darkening of the Redentore, a plague church built to commemorate the ending of a terrible outbreak of the disease. Landmarks should be visible, day and night, to inspire.

I asked a friend to translate the letter into Italian and I mailed it to “Il Gazzettino”, the Venice newspaper. The editor did not toss my letter into the wastebasket. No, he placed it at the center of the front page, supplemented by interviews with church and city officials. None of their justifications for turning the lights off made any sense. I am pleased to report that the Redentore is once again illuminated at night. I claim full credit for the achievement.

Comments of two visitors on Venice:
“It is a great oddity–a city for beavers–but to my thought a most disagreeable residence…. I soon had enough of it.” (Ralph Waldo Emerson) Mr. Emerson, you deeply disappoint me.
“For a Russian, poor and humiliated, it is not hard to lose his mind here, in a world of beauty, richness and freedom…. [H]e who doesn’t go to Venice is a fool. Crimea stacks up against Venice as cuttlefish against a whale.” (Chekhov) Bravo, Anton Pavlovich!

To close, let me invoke these words of the Venetian playwright, Carlo Goldoni:
And wherever I go, I carry the name of Venice sculpted in my heart; I have always remembered Venice; I have always sought to return.
Author can be reached at [email protected]