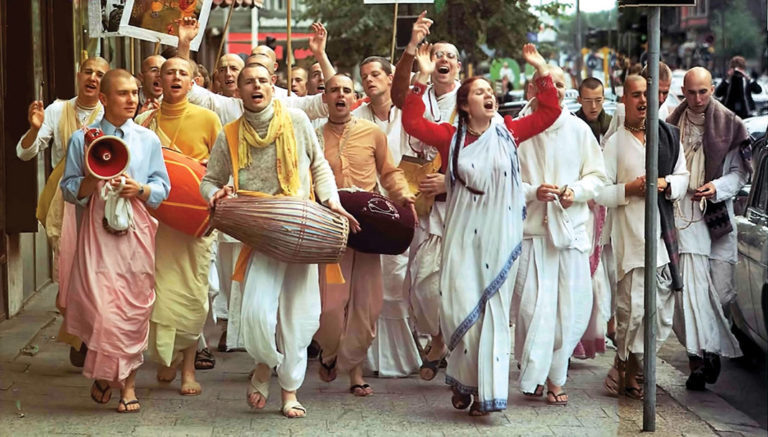 Vrindavan, also known as Braj-bhoomi Vrindavandham, is the most wonderful place for devotees who always long to visit and stay there for blissful experiences in this life; a taste of transcendental living in this temporary world; chanting, hearing and enjoying the pastimes of Lord Krishna, the supreme personality of Godhead. Many nearing old age fancy and love to retire in this city of temples that attracts millions of visitors from all over the world. During Kartikamaasa (October 16 to November 15), this temple town through which sacred Yamuna river flows and that provides shelter to cows, monkeys, peacocks and birds of varied species, adorns mystic and numinous beauty as tourist pilgrims and local citizens take out processions to offer deepdaan to Krishna’s deity in various temples. This ritual of showing lighted lamps is considered to be most auspicious during this period of the year that promises one moksh from cycle of repeated birth and death. It guarantees one permanent abode in Krishna’s heavenly Goloka Vrindavan.

It is also a weekend gateway for people in surrounding metros of Delhi, Gurgaon and Agra who make fleeting and frequent visits to Bankebihariji Temple here to renew their contact with the presiding deity and to savour the famous tikki chaat and lassi to satiate their taste-buds.

I have visited Vrindavan a number of times with my parents and family members who always long to go there. There is something special in the air, and the environment. Almost all the walls in the city are painted with two words “Radhey Radhey” in Hindi. Shopkeepers, cycle rikshaw pullers, flower vendors, sadhus, everyone repeatedly call these names throughout the day while interacting with other people. The folklore and mythology has it that Krishna’s permanent consort Radha is the queen of Vrindavan and in order to please Krishna, one must first please Radha and calling her name is the best form of devotion. We went there last year and hope would go again this year too. We either take an early morning Mumbai-Delhi flight and a further car drive to reach Vrindavan by afternoon. Alternatively, like last year, we take August Kranti Rajdhani Express that arrives Mathura junction early morning. From there, Vrindavan is about half-hour road journey, private taxi or shared rickshaw, and we reach guest house by the time city hustle and bustle starts. Devouts generally wake up early and one can hear rickshaw pullars calling “Radhey Radhey” carrying passengers to temples for Mangala Aarti that is performed before sunrise.

As soon as you set your foot in the town, you feel of having reached a different world. Local youth males who act as guide, can spot you easily and offer their services for free. One boy will just sit in your car, or rickshaw, or even walk with you if you are, and tell you how he can serve you by taking you around the holy place without any charge. As if it’s their duty to guide the travelers lest they not get lost in narrow lanes, each housing temples, for which the city is famous. Informal estimates put the number of these temples at over 5,000. After a few minutes of company, this guide would declare that he would accept whatever you are willing to pay, in cash or kind, even a simple lunch, would be sufficient. On earlier occasions, we used to hire guides. By now, I can find way on my own. But it’s interesting to hear these boys. They tell you various stories. Ancient ones associated with temples and places and also the modern ones about how rampant urbanization in the last 50 years the extensive forests have been converted into concrete structures. The forest cover has been whittled away to only a few remaining spots, and the local wildlife, including peacocks, cows, monkeys and a variety of bird species has been virtually eliminated. Shopkeepers have stopped selling roasted gram (chana), monkeys are crazy for. People used to be virtually terrorized by monkeys who are adept at snatching cameras, handbags and eye glasses. Once, a monkey came up from behind us, and in a fraction of a second, whip off my mother’s glasses.

It’s said in the vedas and repeated by enlightened sadhus that all the results of traveling to all the pilgrimages within the three worlds can be achieved simply by touching the holy land of Braj. When one lives in Vrindavan, even for a short period, one feels living with Krishna because Vrindavan is considered non-different from Him. At every turn, you are reminded of Krishna here, and your spiritual strength increases due to this contact. The Sanskrit name of the city, Vrindãvana, comes from its groves of vrindã (Tulsi, Holy Basil) plant and vana meaning a grove or a forest. Two small groves still exist at Nidhivan and SevaKunj.

Vrindavan has very ancient past, going back more than 5,500 years. The essence of this town was lost over time due to repeated occupation by hostile regimes until the sixteenth century when it was rediscovered in 1515 by Chaitanya Mahaprabhu, who is considered to be a reincarnation of Krishna Himself. He visited Vrindavana, with the purpose of locating the lost holy places associated with Lord Krishna’s transcendental pastimes and wandered through the different sacred forests of Vrindavana in a spiritual trance of divine love. It is believed that by His divine spiritual power, He was able to locate all the important places of Krishna’s pastimes in and around Vrindavan. One of the city’s current oldest surviving temples is the Govinda Dev temple, built in 1590.

The city started attracting increased number of pilgrims both from throughout India and abroad after Krishna-Balarama temple was built by ISKCON founder acharya Prabhupada in the heart of the town about 50 years ago. To enable everyone to see the area in a traditional spiritual way, every year in Kartika, ISKCON organizes Braj Mandal Parikrama. This one-month walking tour goes to all 12 forests in Vrindavan and visits most of major places in the area including Mathura, RadhaKund, Barsana, Nandagrama, Gokula, and Govardhana Hill. Sadhus and serious devotees participate barefoot in this walk for austere and penance, although shoes are permitted.

Even today, Nidhivan is known to host Krishna’s rasleela with hundreds of gopis in the night. The temple gates are closed in the evening and no one is allowed to go or stay within the premises during night time. It’s said that the place had the transcendental capacity to expand during night time to accommodate hosting rasleela and come back to original shape by the sunrise.

Meerabai temple is located near Nidhivan and is dedicated to Meerabai who was one of the most famous poet-sant and dedicated her life for Krishna’s devotion by composing and singing devotional songs in the 16th century. Some hagiography state that she miraculously disappeared by merging into an idol of Krishna at Dwarika in 1547.
Bankebihari temple, built in 1862 is famous for its own uniqueness. Richly decorated Krishna deity has diamond stone in chin and is hidden behind the curtains. In this temple, Krishna is without Radha. Frequently, curtains are drawn apart to enable devotees have Bankebihariji’s darshan for a few minutes. Curtains are again closed and opened repeatedly. Only once in a year, on Akshay Tritiya day can the lotus feet of the deity be seen. This murti is said to have been discovered from Nidhivan by the musician-saint Swami Haridas known for his bhajans, a contemporary of the Six Gosvamis, was also the guru of the famous musician Tansen.

Near Nidhivan is Ranganathji Temple, an imposing south-Indian style construction. This 30 meters high with gold-plated decorations temple was built by the wealthy Seth family of Mathura in 1851 and is dedicated to Lord Ranganathji, a form of Lord Vishnu resting on the Anantshesha (divine serpent). One of the enclosures within the precincts of this magnificent temple has a 15-meter-high pillar made of gold. It is one of Vrindavan’s largest temples and is surrounded by high walls. Once a year there is a grand Ratha Yatra known as Brahmotsava during the month of Chaitra (March-April).

Vrindavan is about 11 km from Mathura, 65 km from Agra and 135 km from Delhi. Mathura is Krishna’s birthplace and Vrindavan is where He spent childhood days. Every inch of Mathura-Vrindavan is wrapped in timeless devotion to Lord Krishna. Vedas say that a person attracted to places other than Vrindavan will certainly be captivated by illusion of this world. A person sincerely attracted to Vrindavan is on his way back to godhead. 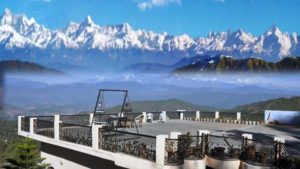 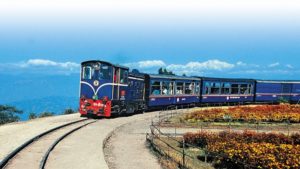