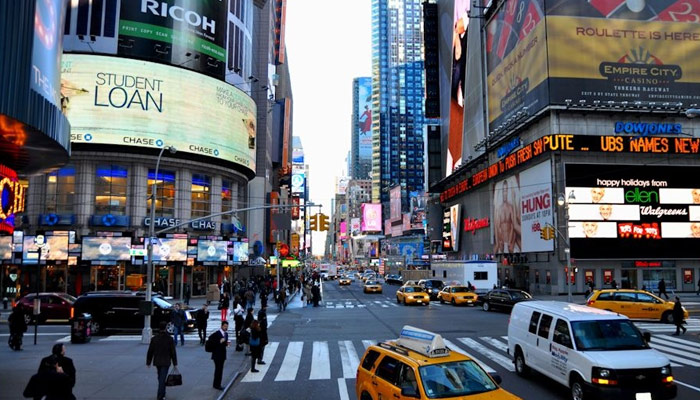 The Russian essayist, Joseph Brodsky, wrote of Peter the Great and St. Petersburg, the city he founded : “Carpenter and navigator, this ruler used only one instrument while designing his city : a ruler.”
In their 1811 plan laying out Manhattan’s avenues and streets from the city’s northern edge at the time –roughly, Houston Street–uptown to the village of Harlem, the state-appointed Commissioners of Streets and Roads in the City of New York embraced the same planning principle as Peter: They drew straight lines.

Officials in the early 19th century felt the need to plan for New York City’s growth.”They looked at the patchwork of street grids that then made up the City and saw the folly of allowing such a random pattern to extend the length of Manhattan,” writes Morrison H. Heckscher, curator emeritus of the American Wing at the Metropolitan Museum of Art.
John Randel, Jr. acted as secretary and surveyor to the three commissioners.”Almost daily,” in his words, he would go “from the city to our office, then in the country, at the northeast corner of Christopher and Herring Streets [now Greenwich Village], previous to performing field work in the suburbs of the city.” He encountered hostility from property owners and squatters and thick woods “impassable without the aid of an ax.” Randel worked “with a view to ascertain the most eligible grounds for the intended streets and avenues, with reference to sites least obstructed by rocks, precipices, steep grades, and other obstacles.”

But “by the time he’d finished [his survey] in the fall of 1810,” Edwin G.Burrows and Mike Wallace note in “Gotham : A History of New York City to 1898”, “the commissioners had settled on an overlay pattern that brooked no such obstacles.” They made the most important planning decisions in the city’s history,creating, in Mr Heckscher’s words, an “inexorable grid that has defined the City ever since: 12 north-south avenues, all 100 feet wide, and 155 east-west streets,15 to be the width of avenues and 140 to be 60 feet wide.”

To forestall criticism that their plan provided too little space “for the benefit of fresh air and the consequential preservation of health,” the commissioners argued that “if the City of New York were destined to stand on the side of a small stream, such as the Seine or the Thames, a great number of ample spaces might be needful; but those large arms of sea which embrace Manhattan Island, render its situation, in regard to health and pleasure, as well as to convenience, peculiarly felicitous….”

The commissioners explain why they stopped at 155th Street: “To some it may be a matter of surprise, that the whole Island has not been laid out as a City; to others, it may be a subject of merriment, that the Commissioners have provided space for a greater population than is collected at any spot on this side of China….[I]t is improbable, that (for centuries to come) the grounds north of Harlem Flats will be covered with houses.” (Improbable, yes, but this is what happened.)

The commissioners’ plan had fierce critics. The historian, IN Phelps Stokes, author of “The Iconography of Manhattan Island, 1498-1909”, wrote, “As a matter of fact, it destroyed most of the natural beauty and interest of the island….” The historians Burrows and Wallace agree with Stokes, writing, “Manhattan’s ancient hills, dales, swamps, springs, streams, ponds, forests, and meadows–none would be permitted to interrupt its fearful symmetry.”

An early I9th century critic was even more scathing, believing that the city’s leaders were “resolved to spare nothing that bears the resemblance of rising ground….These are men…who would have cut down the seven hills of Rome, on which are erected her triumphant monuments of beauty and magnificence and have thrown them into the Tyber [Tiber] or the Pomptine [Pontine] marshes.”
But the commissioners’ plan basically has withstood the test of time, with the exception of one enormous and felicitous breach: The creation of Central Park in the 1850s. The 843 acres of Central Park broke the “inexorable grid”, north-south from 59th Street to 110th Street, and east-west from Fifth Avenue to Central Park West.

On a visit to the library of the New-York Historical Society, I request “Item NS4 Range 00 in blue tube atop green shelves on the east wall.” This is the original of the commissioners’ plan, extending almost eight feet in length and over two feet in width. The library’s senior conservator and a reference assistant unroll the plan with the utmost care on a long wooden table.

With enormous pleasure and excitement, and magnifying glass in hand, I stretch my 6 foot 3 inch frame over the table to examine the six joined sheets of the plan.
l look for the block where I live and come upon East 73rd Street, bounded by Third Avenue and an, as yet, unnamed avenue, later to be called Lexington. The block and two avenues exist only on paper. In 1811, my block may have been covered by trees, perhaps as “impassable without the aid of an ax” as the areas surveyed by John Randall. (According to a notation on the plan, a ridge ran west along 73rd Street to Sixth Avenue and east to Avenue A at 70th Street. The ridge would have presented future road builders with a major challenge. The remains of the ridge may be the cause of a present day incline on Lexington Avenue between 74th and 73rd Street.)

Having lived at 155 East 73rd Street for over five decades, I resolved a few years ago to learn more about the carriage houses on my block, houses I have passed many thousands of times, day and night, in all seasons.

The first residential structures on the Upper East Side were row houses built in the early 1860s and sold to families of modest means. As the 19th century drew to a close, mansions built for the city’s wealthiest residents on  Fifth and Madison Avenues replaced many of the row houses west of Park Avenue. Wealthy New Yorkers did not consider the streets east of Park Avenue as desirable places to live. On streets like mine, row houses were demolished to make way for carriage houses. The mansion owners wanted their private carriages and horses nearby, but not so close that the noise and smells of stables would mar the pleasures of their luxurious habitations.

Each of the eleven carriage houses on my street is a two-or-three story structure. The lowstructures allow for an abundance of sunlight on the block. The carriage houses are designed in a variety of styles: Romanesque Revival, Beaux-Arts and neo-Flemish Renaissance. The front room on the ground floor was used for carriages and the rear room contained stalls for horses. On the upper floor would be found living quarters for the coachman and grooms and the hayloft.

One sun-filled Sunday afternoon, I stand on the sidewalk examining the twin carriage houses, Nos.161 and 163, adjoining the ten story apartment house built in 1929 where I live. Both carriage houses are ornamented with equestrian details I had not noticed before. The keystone over the vehicular entrance at 161 is in the form of knotted reins, and at 163 takes the shape of a saddle pouch. Above each ground floor window is a stone with horses heads carved in relief.

The names of carriage house owners read like a Who’s Who of American wealth: Vanderbilt, Harkness, Marquand, Pulitzer. They could afford to use architects of national prominence. Thus Richard Morris Hunt in 1883 designed No.166, the first carriage house built on 73rd Street, for Henry Gurdon Marquand, a real estate, banking and railroad tycoon. A decade later, Hunt was commissioned by Marquand, then president of the Metropolitan Museum of Art, to design the museum’s magnificent Fifth Avenue facade.

Over the years, some of the carriage houses have been put to innovative uses. Edward Harkness, an heir to the Standard Oil fortune, built a squash court on the second floor of 161. In 1950, the building passed into the hands of the Dalcroze School of Music. For years I would be awakened early Saturday mornings by an aspiring pianist pounding on a keyboard.

The Pulitzer family, which had purchased No.166 from the Marquand estate, sold the building in 1924 to the MacDowell Club of New York, an organization promoting the arts. Founding members included the famous actress Sarah Bernhardt; Daniel Chester French, the designer of the Lincoln of the “Lincoln Memorial” in Washington, and Charles McKim of the distinguished architectural firm of McKim, Mead & White.

Having learned something of its history, living on my block will never again be the same for me. Horses, coachmen, grooms, blacksmiths, actresses, sculptors, architects once passed along these streets. On some rain-filled evening, when lamppost lights are reflected on the moistened street and the aroma of the ocean is in the air, reminding me that I live on an island off the coast of North America in a city by the sea, I may see a carriage and horse emerge from a carriage house, with coachman and groom, bound for a festive event at a Fifth Avenue mansion. I will watch in wonder as the carriage disappears down the street into the darkness.