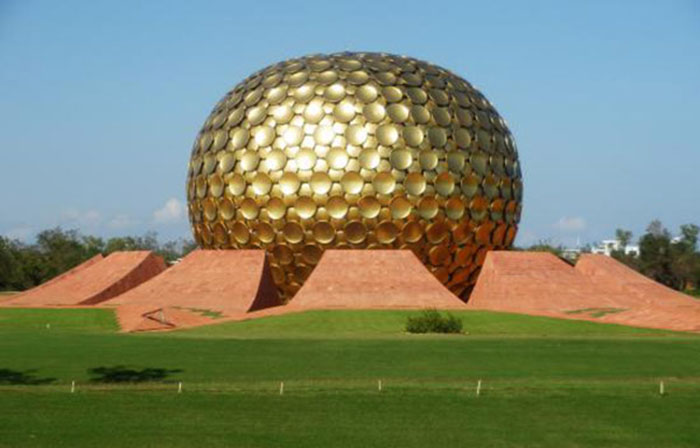 To many, Pondicherry has always been a place one belonged to and not a place one went to. Tucked away in one corner of the busy town of Pondicherry is a unique building, or rather an institution, one of its kind in the world. It is unique because it is the one that has given Pondicherry, the one-time fishing village, the status of a cosmopolitan city and secured it a place on the tourist map of the world. It is unique because it stands on a place where once Sage Agastya had his Ashram.

The tall wooden doors of this unique building welcome us with their wide opened arms. We are pulled by an invisible invitation. We enter with the least notion that a feast awaits us. The multi-coloured leaves of crotons, flower bearing cactus plants of different sizes and shapes, the green foliage of shrubs grown in the broad-bottomed pots and a wide variety of plants that bear admirable flowers of different sizes and hues serve a feast for our eyes. Looking around we realize that cleanliness too has a smell of its own. It is here we like to inhale more air and reluctantly exhale it. The prevalence of a mysterious silence here is music for our ears.

For a moment we blink, for we are not sure of where we are. The next moment we realize that we are in an altogether different world. Does Heaven look like this? Perhaps. Into this Heaven of bliss people go, pray and meditate. And that’s Sri Aurobindo Ashram which attracts thousands of devotees and visitors every day. How did this ashram come into being, especially when Sri Aurobindo didn’t consider himself a guru and never wanted his dwelling place to be called an ashram?

Born in Calcutta on August 15, 1872, Sri Aurobindo went to England at the age of seven to have his education. A voracious reader right from his school days he developed a rare mastery over the English language and proved to be a brilliant scholar in Greek and Latin. He had learned French from his childhood and had also learned enough German, Italian and Spanish to study Goethe, Dante and Calderon in their original tongues. And his favorite subjects were literature and European history. In 1890 he also passed the final examination for the Indian civil service. But he disqualified himself by not attending the riding test, not wishing to serve in the I.C.S.

By the time he was 21, he returned to Baroda and spent thirteen years as an administrator and a professor in the Baroda State Service. Those were years of literary activity and was also preparing a base for his future political work. Not only did he steep himself into the rich Indian cultural heritage, but also made a deep study of the prevailing political condition of the country. It was in 1906 he went to Bengal and openly joined India’s freedom movement. His daily newspaper, Bande Mataram, became the most powerful voice of the Indian Nationalist Movement. He was arrested in the Alipur Conspiracy case in 1908 and was incarcerated for a year. His one year’s under-trial detention in jail proved to be a turning point in his life. Spending most of the time in the practice of yoga, Sri Aurobindo had a series of decisive spiritual experiences which completely changed the future course of his life.

“Go to Pondicherry”. That was an inner call which puts an end to all his revolutionary work and made him retire from active politics. He withdrew to Pondicherry for exclusive concentration on his spiritual practice. That was in the year 1910. In 1914 after four years of intense yoga, Sri Aurobindo launched Arya, a monthly philosophical review. He serialized most of his major works that embodied much of the inner knowledge that had come to him in his practice of yoga.

It was only during this period Madam Mirra Richard, later known as the Mother, sailed to Pondicherry from France and met Sri Aurobindo for the first time on March 29, 1914. She recognized him as the one who for many years had inwardly guided her spiritual development. For eleven months she remained in Pondicherry helping Sri Aurobindo to publish the Arya. But she had to return to France for obvious reasons.

Sri Aurobindo’s spiritual collaborator, the Mother, was born in Paris on February 21, 1878. Right from her early childhood, she was a talented musician and an accomplished painter and a spiritually conscious person. Between eleven and thirteen a series of psychic and spiritual experiences revealed to her not only the existence of God, but also man’s possibility of uniting with Him, of realizing Him integrally in a life divine.

She came back to Pondicherry on April 24, 1920 only to resume her collaboration with Sri Aurobindo in his spiritual work.

Integral Yoga, as practiced by Sri Aurobindo, rises to the spirit to redescend with its gains bringing the light and power and bliss of the spirit into life to transform it. It is only by the descent of this super mind that the perfection dreamed of by all that is highest in humanity can come. It is possible by opening to a greater Divine consciousness to rise to this power of light and bliss, discover one’s true self, remain in constant union with the divine and bring down the Supramental Force for the transformation of mind and life and body. To realize this possibility has been the dynamic aim of Sri Aurobindo’s yoga.

Arya, the 64-page monthly philosophical review, serialized the most important of Sri Aurobindo’s works: The Life Divine, The Synthesis of Yoga, Essays on the Gita, The Secret of the Veda, The Foundations of Indian Culture, The Future Poetry, The Human Cycle and The Ideal of Human Unity. The complete works of Sri Aurobindo was published as the Sri Aurobindo Birth Centenary Library (SABCL) in the year 1972 to mark the birth centenary year of Sri Aurobindo.

With the three or four young men who accompanied Sri Aurobindo or joined him in Pondicherry, Sri Aurobindo had at first the relation of friends and companions rather than of a Guru and disciples. At the time the Mother rejoined Sri Aurobindo, a small group of aspirants had gathered around him specifically to practice yoga under his direction. Yet the grouping remained informal, and was not referred to as an ‘ashram’. But in 1920 an attempt was made at collective organization. When Sri Aurobindo retired into seclusion on Nov. 24, 1926, the responsibility of taking care of the outward lives of the disciples and guiding their inner lives passed into the Mother’s hands. It was in this way the ashram was founded or rather founded itself in 1926.

Sri Aurobindo Ashram has nothing to do with asceticism or retreat from the world. Since Sri Aurobindo’s yoga differs from that of traditional yogic systems, the ashram that grew up around him is not an ashram like others. What is being done here is a work – a work which will be founded on yogic consciousness and yoga-shakti (the divine power) and can have no other foundation. Every member here is expected to do some work in the ashram as a part of his spiritual preparation. The primary purpose of the work, however, is not to satisfy any practical or economical need, or to be a means for the self-expression of the members, but to provide a field for their spiritual growth. “Work done in the ashram,” wrote Sri Aurobindo, “is done not as a service to humanity but as a service to the Divine. Surrender to the Divine alone, rejection of ego and all the ordinary vital movements and the training in a psychic elevation, selflessness, obedience, renunciation of all mental, vital or other self-assertion of the limited personality”.

It must be mentioned in passing that each of the Ashram’s departments grew up in answer to a particular need of the community, for everyone is seen as part of a diverse but interrelated whole. This may be the reason for Sri Aurobindo’s claim that the ashram is his ‘spiritual laboratory’.

Sri Aurobindo International Centre of Education, with 150 teachers and 450 students, seeks to develop every aspect of the child, rather than to concentrate exclusively on mental training. Importance is given to physical education too. The ‘Free Progress System’ as devised by the Mother, is a progress guided by the soul and not subject to habits, conventions or preconceived ideas. Every student is encouraged to learn by himself as the teachers are no instructors here, but only advisers serving as a source of information. The main motive of this centre is to awaken in its students the joy of learning and an aspiration for progress independent of outer motives. And to cap it all, the Centre does not award degrees or diplomas.

Supported by the devotees and admirers of Sri Aurobindo and the Mother, the Sri Aurobindo Ashram is administered by a board of trustees. Various departments in the Sri Aurobindo Ashram provide its members with everything they need for a decent and healthy life. Food for 2000 persons is prepared three times a day at the common kitchen. Rice, vegetables and fruits are grown in various farms, fields and gardens belonging to the ashram.

Medical care is available at various clinics of the ashram and the physicians belonging to various systems of medicine are at the service of patients. There is no dearth of artistic and cultural activities in the ashram. There is an art gallery, a studio for painting and sculpture, a dance hall and a music room and above all a theatre for dramatic and other performances. While the Archives and Research Library preserves the manuscripts of Sri Aurobindo and the Mother to prepare material for publication, the Ashram main library caters to the tastes of students and general readers.

A number of small scale industries governed by the Ashram Trust support the lives of so many workers and their families. Some of the industries represented are woodworking, stainless steel fabrication, and handmade paper manufacture. Handicrafts, incense, hand marbling of silk fabrics, embroidered goods, perfume, pottery, batik work are some of the cottage industries popular here. The Reception service cares for the visitors and accommodates them in the Ashram’s guest houses.

Sri Aurobindo left his body on Dec. 5, 1950. With the aim of realizing Sri Aurobindo’s vision of human unity, the Mother founded ‘Auroville’, the ‘City of Dawn’ in 1968 near Pondicherry. “I came to India to meet Sri Aurobindo. I remained in India to live with Sri Aurobindo. When he left his body, I continued to live here in order to do his work which is, by serving the Truth and enlightening mankind, to hasten the rule of the Divine Love upon earth,” said the Mother on her ninetieth birthday.

The Mother left her body on Nov. 17, 1973. Under the guidance of the Mother, which extended over nearly fifty years, the Sri Aurobindo Ashram has grown into a multi-faceted community.