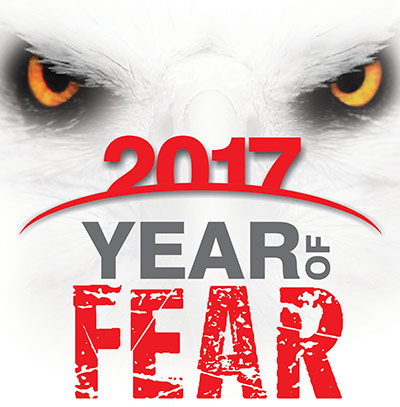 When a system grows in a linear way, its potential instability grows exponentially. Clueless bankers and incompetent politicians would resort to extreme untested policy measures when a catastrophe strikes on an unprepared society. Nine years since the last recession in 2008 and no one should be surprised if it happens again. The crisis keep coming fairly regularly: 1987, 1994, 1998, 2001, 2008. Every time, it appears the previous crisis was only a foreshock. The earthquake is now coming in 2017, says Ashok Jainani.

When a system grows in a linear way, for a prolonged period, instability of the system grows exponentially. Disasters generally arrive when nobody expects the same. People become complacent, or get used-to the existing state of affairs, believing the current trends would continue ad-infinitum when it’s known in advance what an outcome would be for a given input. Because, people get conditioned to believing the same and are blinded by the paradigm shift in popular thoughts and mainstream behaviour that they are unable to fathom the shift in trend taking place before it actually hits them suddenly in the face.

The global war on terror, war on black money, interest rates rigging by banks’ cartel, freak-trades or Wall Street flash-crash, passenger aircraft disappearing are not black-swan events. In fact, the ravens all around are pointing to an unprecedented event in the form of fall of capitalism itself.

Duration between the two crises is not fixed by any sovereign nor does it lie in the realm of economists’ professing skills. Nine years since the last global financial crisis in 2008 and no one should be surprised if it happens again. In fact, it should only be expected since history is replete with such examples of crises, each being bigger than the previous one, bringing catastrophic losses and slashing peoples’ living standard by imposing new taxes and ever increasing intrusive rules on individual privacy. No matter the powers-that-be assuring us that newly minted billions are earmarked for increased regulation, oversight and preventive measures. But the crises keep coming fairly regularly: 1987, 1994, 1998, 2001, 2008. Every time, it appears the previous crisis was only a foreshock before the earthquake. It’s now coming in 2017!
The flawed paradigms persist for a long period of time, before they are broken, because of the allure of elegant mathematics propounded by decorated dogmatic academics and system-induced inertia. It’s nice to stay in a warm bed on a cold winter afternoon. Some of these beliefs and notions will be broken in 2017, the Year of Fear.

Brexit, Trump victory and Modi’s currency ban are “Upredictable Outcomes.” The new year will bring many such outcomes. In fact, “Unpredictable” will become the new normal for the year. That will spike volatility, across asset markets and in peoples’ opinions. They will oscillate from optimism to extreme fear with rise in the risk premiums.

The investors must now accept, and expect, that the next crisis in the global economy and financial markets is not going to be a long and slow decline, but rather a sudden one at a much bigger scale because it will begin at the biggest scale so far. Trillions in outstanding derivatives, trillions in central banks’ Quantitative Easing and trillions in corporate debt defaults.

The global war on terror, war on black money, interest rates rigging by banks’ cartel, freak-trades or Wall Street flash-crash, passenger aircraft disappearing are not black-swan events. In fact, the ravens all around are pointing to an unprecedented event in the form of fall of capitalism itself. Clueless central bankers and incompetent and selfish lawmakers, after trillions in fiscal stimulus, extreme untested policy measures will be needed when a catastrophe strikes on an unprepared society. “Governments around the world have no compunction about conspiring against their citizens,” says Mr James Rickards in his latest book The Road To Ruin. More and more debt is going into less and less productive assets, thereby lowering investment returns.

No one could imagine before Mr Modi’s surgical strike on black money at the turn of the year 2016, nor are people able to conclusively estimate the probable impact of Mr Modi’s demonetization of high denomination notes. The “war on black money” is nothing but a war on cash. The move has several side effects, including causing depression, and also the bad loan re-sets, to be seen in the coming months, though the main stated objective remains to weed out corruption and stop terror financing. He and his government aim to force change in people’s spending behaviour through rationing of cash and increased use of digital transactions so that these could easily be tracked and taxed if evaded, or confiscated by the federal authorities if established as “sin money.”

Forced money lock-in in banks and rationing of cash will lead to demand destruction in informal sectors and cut India’s GDP expansion to traditional Hindu growth rate of about 6-6.5%. This does not augur well for Mr Modi’s dream project of housing for all. At that rate of growth, Indian markets can’t remain overseas investor’s darling and claim higher price-earning (PE) multiples.

US President-elect Mr Donald Trump and Prime Minister Mr Narendra Modi have already made it loud and clear that they are determined to take extreme policy steps on economic and foreign affairs front. The United States under Mr Trump’s presidency would re-draft and alter the contours of the free trade under WTO and Trans-Pacific Partnership. He calls China’s unbalanced trade surplus with the US as “the greatest theft in the history of the world.” This conforms to the economic theory of mercantilism and worldview of the Queen Elizabeth-I of the 16th-century England, and to Prussia’s Iron Chancellor, Otto von Bismarck, in the 19th century. Mr Trump vows to deport 3 mn illegal immigrants immediately after inauguration.

Governments around the world have no compunction about conspiring against their citizens,” says Mr James Rickards in his latest book The Road To Ruin.

China’s building artificial islands in Sparta Islands, in order to establish its claim on territorial waters in South China Sea, ostensibly for resource control, could be a flashpoint for a military conflict with its neighbours Philippines, Taiwan, Malaysia, Vietnam and Brunei and lead to renewed arms race in the region. China’s exports shrank 6.1% last month, signaling renewed weakness for the world’s second biggest economy as it faces possible trade tensions under Trump’s trade tantrums. China has recorded shrinking exports in ten out of eleven months to December 2016.

The days of super returns on stocks are over as the factors and forces that drove exceptional investment returns to investors over the past three decades are weakening, and even reversing. An extraordinarily beneficial confluence of economic and business fundamentals such as inflation, interest rates, pro-globalisation investment-led GDP growth, corporate profitability and market re-rating as a result of opening up of the financial sector itself has lived its course and threatens redesign and reallignment of the global trade. The stock markets, which abhor uncertainty, ought to be very sensitive to these far-reaching changes the world is witnessing and the consequences are going to be borne by the investors. After the UK’s exit from the European Union, emerging leadership in Italy and France are promising their voters to take these countries out of the monetary union that is considered to be heavily favouring the German corporations. The world politics, immigration crisis in the EU, rising unemployment and a sluggish global trade impacting GDP growth would require government leaders use unconventional monetary and fiscal measures. All of which would further lead to more taxes and more intrusive powers to the state at the cost of individuals’ personal liberty and freedom. Bail-in, not Bail-out by Banks

What politicians say, what they mean and what they do need not be in congruence. The new year will provide ample proof for the same. For 8 years since 2008, human race were fed the belief that central banks would send helicopters to drop money, supposedly to stimulate growth. But Mr Modi sent vacuum cleaners to suck notes out of people’s pockets.

So far, people have come to believe that the government bails the banks out and comes to support whenever banks are in need of capital which periodically gets eroded due to corporate loan defaults. Never be surprised, this time round, the government will tell the banks to go for “bail-in” since “bail-out” is against the tax-payers who are in effect bank depositors. The “bail-in” will typically involve adjusting loan losses with the depositors’ money. In simple terms, it will be the depositors who will take hair-cut, a pro-rata amount of deposits will be reduced, against adjustment of bad loans written off by banks. Be prepared for it because the government, a puppet in the hands of deep-state, believes that profits are private while losses are public.

Disruption will be the key-word and enter the mainstream thought process and lifestyle. Disruption in the way people think and do things. Disruption in the way things worked would begin the end. It will be the beginning of the end how things worked. No longer they will work according to known maxims. We will have to discover new ways to deal with the old as well as new problems and new risks. The most effective protection in the year of fear is to arm yourself with knowledge.