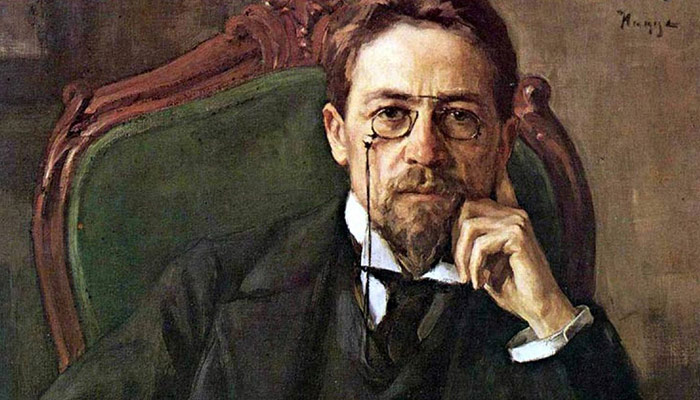 Having arranged three sessions on the short stories of Chekhov at the New York Society Library, conducted by a Chekhov scholar, I am making use of every available moment, day and night, to read the assigned stories, lest I disgrace myself during the discussions.

Reading Chekhov on the Subway. A crowded subway car presents many distractions. A man boards holding a collection of large balloons. Barely visible behind the balloons, he is delivering them to a celebratory event somewhere in the city. A cyclist boards. He prefers rail travel to pedaling to his destination. The train leaves the dark tunnel to cross the Manhattan Bridge to Brooklyn. From the train window, views of the East River, Brooklyn Bridge and Lower Manhattan. Alas, Anton Pavlovich, I am making little headway in reading your short stories.

Reading Chekhov at Work. Forget it. Too many distractions. But I do look at the Chekhov picture on my office wall from time to time.

Reading Chekhov in Central Park. I watch a weekend softball game. Beyond the outfield, the glorious Fifth Avenue and Central Park South skylines provided by the Pierre, Sherry-Netherland, Plaza, Hampshire House and Essex House hotels. As a late afternoon sun casts a golden glow over the city, I read aloud in the stands this joyous Chekhov passage: “And he was charmed with the evening, the farmhouses and villas on the road, and the birch trees, and the quiet atmosphere all around, when the fields and woods and the sun seemed preparing, like the workpeople now on the eve of the holiday, to rest, and perhaps to pray….”

Reading Chekhov at a Concert. My brother-in-law and nephew are choir members performing works by Schumann and Stravinsky. As they sing, I pretend to follow the libretto, while surreptitiously reading Chekhov.

Reading Chekhov in Chinatown. I am having lunch at Maria’s. Chinese is spoken at the table I occupy.

Reading Chekhov at Home. I lie on the living room couch in my favorite position–horizontal–and fall asleep.

Despite obstacles, distractions and human weakness, I complete the assigned Chekhov readings and perform reasonably well at the sessions.

Ah Chekhov, you who understand how difficult life is for most people. You who are generous in portraying those who strive to live a better life, even when they fail, which we mostly do. You who are modest, who seldom condemns. You who lists “compassion” as an artistic tenet. Favorite passages from my reading.

His tenderness for those who suffer:

The young orphan boy who has been apprenticed to a shoemaker in Moscow. Mistreated and homesick, he writes to his beloved grandfather to come and take him back to the village. He places his tear-stained letter in an envelope and mails it, stampless, with only this address: “To grandfather in the village, Konstantin Makaritch.” (From the Chekhov’s short story, “Vanka”)

The old cab driver whose son has just died. No one will listen to his sad tale. He shares his grief with his mare. “Now let’s say you had a little foal, and you were its mother… And what if your little foal were to depart this life… You’d be sad,wouldn’t you?” The little horse chews, listens, and breathes on the hands of her master… I on a gets carried away and tells her everything. (“Grief”)

A prisoner dreams of owning a farm, marrying, having children. Naive as his dreams were, they were uttered in such a genuine and heartfelt tone that it was difficult not to believe them… The constables listened and looked at him gravely, not without sympathy. They, too, believed in his dreams. (“Dreams”)

The failure to make full use of our lives. “What losses! What dreadful losses!” (“Rothschild’s Violin”). “Life is not given twice,it must be treated mercifully.” (“Gusev”)

Chekhov on “themes old, but not yet out of date”:

[I]ncredible poverty all about us… Yet all is calm and stillness in the houses and in the streets… [W]e do not see and we do not hear those who suffer, and what is terrible in life goes on somewhere behind the scenes… Everything is quiet and peaceful, and nothing protests but mute statistics: so many people gone out of their minds, so many gallons of vodka drunk, so many children dead from malnutrition…. It’s a case of general hypnotism. (“Gooseberries”)

I will only say one thing — one can’t just sit and do nothing. True, we are not saving humanity and perhaps we make mistakes, but we do what we can, and — we are right. The loftiest and most sacred task of a cultured person is to serve his neighbors, and we endeavor to do so to the best of our abilities. (“The House with the Mansard”)

And now, shrinking from the cold, he thought that just such a wind had blown in the days of Rurik and in the time of Ivan the Terrible and Peter, and in their time there had been just the same desperate poverty and hunger, the same thatched roofs with holes in them, ignorance, misery, the same desolation around, the same darkness, the same feeling of oppression –all these had existed, did exist, and would exist, and all the lapse of a thousand years would make life no better. (“The Student”)

But Chekhov reminds us that just as nature can change — “Looking at this gorgeous, enchanted sky, at first the ocean scowls, but soon it, too, takes tender, joyous passionate colors for which it is hard to find a name in human speech” (“Gusev”) — so, too, can we change. “And however great was wickedness,… everything on earth is only waiting to be made one with truth and justice, even as the moonlight is blended with the night.” (“In the Ravine”)

Like the student in one of his short stories, Chekhov had a “talent for humanity.” The talent extended beyond his literary endeavors to his daily life. He raised money to assist famine sufferers. He provided funds for the building of village schools. Much of the income from his plays was used for this effort. He made an 11-week 6,500-mile journey eastward from Moscow to Siberia by train, horse-drawn carriage and riverboat to reach the prison colony on Sakhalin Island. Before leaving Moscow, he had written his publisher, “From the books I have read and am reading, it is clear that we have sent millions of people to rot in prison,we have let them rot casually, barbarously, without giving it a thought…” Once on the island, Chekhov conducted interviews with thousands of convicts. Of his book, “The Island of Sakhalin,” he said, “It gives me joy that this harsh convict’s robe shall have a place in my literary wardrobe.”

What began as a frolic — reading Chekhov while traipsing around New York City — became for me an important personal experience. His writings impart immense wisdom and his actions, immense admiration. What a transformation from his being, in his own words, a “slave” in his youth. He writes of himself: “[S]on of a serf… who was whipped many times… who used his fists and tormented animals… who was hypocritical in his dealings with God and men gratuitously, out of the mere consciousness of his insignificance — write [he urges a colleague] how this youth squeezes the slave out of himself drop by drop, and how, waking up one fine morning, he feels that in his veins no longer flows the blood of a slave but that of a real man…” (Chekhov’s father was born a serf. He obtained his freedom at age 16.)

Chekhov and India bring to mind R.K. Narayan, with whom I had the honor of meeting, through a mutual friend, in Madras in 1993. I came upon him sitting on the porch of his granddaughter’s house where he could both enjoy the tranquility of a small garden and watch the lively scene on the street.

Like Chekhov, Narayan writes in a quiet, understated way. This passage, from “Under the Banyan Trees,” would have resonated with Chekhov: “The village Somal… was in every way a village to make the heart of a rural reformer sink.” On the subject of rural reform, there were many sinking hearts in Russia and India, Chekhov’s and Narayan’s among them.

Both write with compassion. In “A Horse and Two Goats,” an ancient, impoverished farmer craves a sauce to enliven his tasteless meal. His wife, also elderly, turns on him: “You have only four teeth in your jaw, but your craving is for big things.” She then relents: “All right, get the stuff for the sauce and I will prepare it for you. After all, next year you may not be alive to ask for anything,”

At age 87, Narayan was physically frail, but his conversation was lively. We are driven to the Park Sheraton Hotel for a wonderful South Indian lunch. Betel leaves are served at the conclusion of the meal. He inscribed for me a copy of his latest book, “Grandmother’s Tales.”As he wrote in “My Days, A Memoir”, “On a certain day in September, selected by my grandmother for its auspiciousness, I bought an exercise book and wrote the first line of a novel…” His first year’s income as a writer was “about nine rupees and twelve annas…” He had, as yet, no conception of himself “as an economic entity.” Chekhov had a rocky literary start as well, with one critic commenting on an early submission, “A few witty words cannot obliterate such woefully insipid verbiage.” Toughness is required of a writer. Both persevered!

We drive through the streets of old Madras. Mr Narayan and I part at the Hindu temple of Kapaleeswarar where stall-keepers sell offerings of coconuts, flowers and fruit.