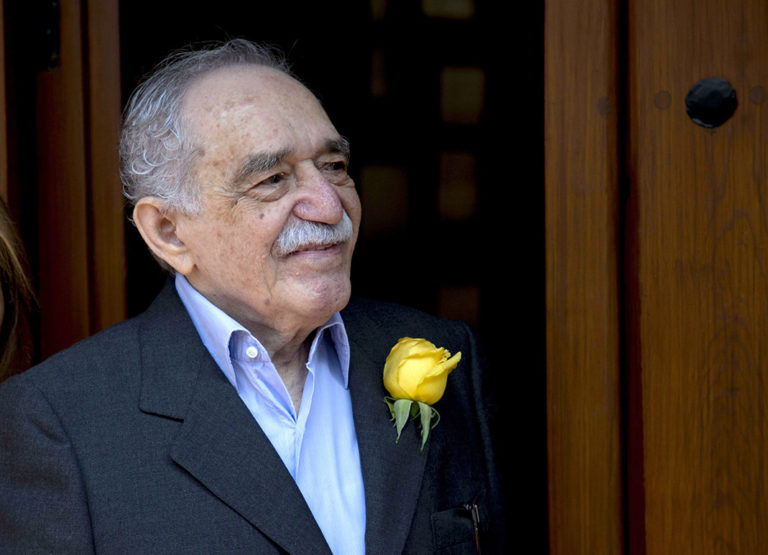 These are election times so obviously newspaper headlines are full of election news, and the same applies to the news channels. I find it too boring and a waste of time going through them as we all know most of the rubbish that we read or watch is either paid for or there is a personal agenda of the group that owns these papers and channels. Ultimately at the end of the day they will get to making some quick bucks and parties fighting tooth and nail will come together to form a coalition government, if they don’t get a majority of their own.

Brooding over this culture I remembered the good old days, when we could get to read something unusual on the front page, although even then it was seldom. And I remembered one such lead story which was published in a mainstream newspaper some 20 years back.

It so happened that noted filmmaker Mrinal Sen received a poem from Nobel Prize-winning writer Gabriel Garcia Marquez, who was seriously ill those days (He died on 17 April 2014, much later). The poem was significant since it was something like a last letter to one’s close friends and well wishers. It is said La Marioneta in Spanish, a farewell poem. Hindustan Times (HT) made it the lead story of the day. Indeed it was. HT reporter Ashis Chakrabarti had translated the poem which I still remember and I quote:

If I were to be given another life
I would dress simply,
Throwing pretensions to the sun,
And leaving not only my body,
But also my soul exposed…..”

This is how the poem begins and I again quote Ashis, “If for an instant God should forget that I am a puppet and were to give me another piece of life, possibly I wouldn’t say what I think, but I would certainly think all that I say.” It goes on,

“I would sleep little and dream more,
because I understand that for every minute
that we close our eyes,
we lose sixty seconds of light.”

The poem ends on a cynical note,

“There are so many things
I have learnt from you all.
But finally they don’t help because,
unfortunately, when they put me in the coffin,
I’ll be dying.”

Marquez had sent this poem to his friends across the world, some 70-odd people. Mrinal Sen was the only Asian to receive the poem. Sen had first met the celebrated author at the Cannes Film Festival of 1982.

Contrary to what Marquez is known for when he was once asked what he believed in, magical realism or in magic of literature, his reply was, ‘I believe in the magic of real life.’ He narrated a story: “I saw a man who could cure cows suffering from worms in their ears. He said that he cured them with a single prayer, without touching them. He would stand at a certain distance from the cow and start saying his prayer. And the worms, already dead, would fall out of the ears, which would be quite cleaned out. I know this for a fact. In fact, there was no need for him to even go anywhere. Even if people come to his house and told him about the ailing cow he would rid it of the worms. I think that it is “magical realism”.

Born in the small town of Aracataca, Colombia, on 6 March 1928, Marquez started his career as a journalist and a staff reporter for the Colombian newspaper El Espatador. He also worked as a foreign correspondent in Rome, Paris, Barcelona and New York. He was awarded Noble Prize in 1982.

He was widely translated from the Spanish and well-known for his novels, ‘One Hundred Years of Solitude’, ‘Chronicle of a Death Foretold’, ‘The Autumn of the Patriarch’, ‘In Evil Hour’ and ‘Of Love and other Demons’ and collections of short stories ‘Leaf Storm’, ‘No one writes to the Colonel’ and ‘Innocent Erendira’.

These books have been sold in the millions, but see what the celebrated author himself had to say about his books, “I was once travelling to Geneva by train. It was a twelve hour journey. I had nothing to read except a copy of One Hundred Years of Solitude, which I was taking for some friends. And so I began to read my own novel. I could not get through the entire books, but read about three or four chapters. I did not like it. While writing it, I was certain that it was the best book in the world. But when I read it on my way to Geneva I felt very ashamed. I realized that I did not have enough time to write it properly.”

That’s the fire and urge for the perfection that kept the writer going.

And yes, lest I forget, let me salute the News Editor of HT who was on duty that day. Because most of the News Editors have fascination only to publish rubbish on the front page like informing the nation when a privileged and pampered (at our cost) child of a politician is becoming a mother.