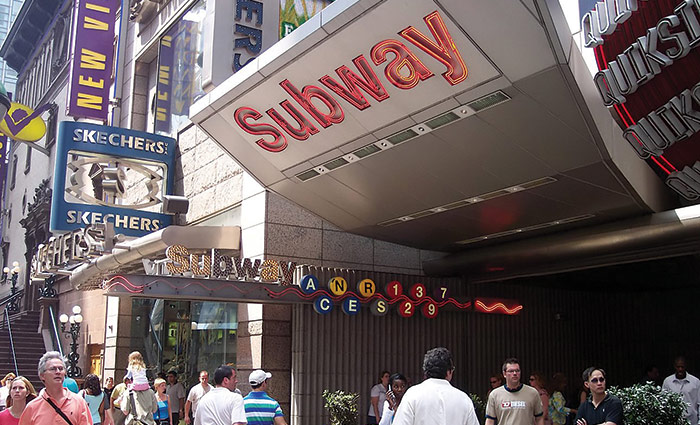 The New York City subway system is huge, with 714 miles of track along 244 miles of routes, and 475 stations. It serves a city of 309 square miles with a population of 8.6 million and carries a weekly daily average of 5.7 million passengers.

The subway system has a total of 23 lines. I have traveled on 19 of the lines. I pay $58.25 to purchase a monthly Metro Card entitling me to an unlimited number of rides. I take about 80 subway rides a month. As much subway traveling as I do, I still encounter problems. Recently, I sought to gain entrance to the subway platform at the East 23rd Street station. I swipe my fully paid Metro Card at the turnstile. Nothing happens.
A message appears on the turnstile screen: “Swipe again at this turnstile.” I do so, over and over again, twenty times and more, as trains arrive and depart without me.

Fuming, I plan to leap over the turnstile, but wisely reconsider. Instead, I crawl under the turnstile arm on the filthy station floor. As a lawyer who is of an advanced age, what a position to find myself in, subject to possible arrest for the crime of “theft of service,” or, to use the parlance of the street, as a “fare beater.”

Having wiggled my way under, I rise to my feet, brush myself off, and board the next arriving train. By far, my most dramatic subway experience occurred following a basketball injury to my leg. On my way to work the next morning, I limp from 73rd Street, where I live, to the 68th Street Lexington Avenue Subway station.

I board the number 6 downtown local. There are no seats, it being the morning rush hour. At the 51st Street station I feel unwell. As the subway nears Grand Central, I faint. There is an advantage to being packed in a subway car like a sardine in a can. When you faint, you land on your fellow passengers, not a hard floor.

When I regain consciousness, I am flat on my back in the subway car at the Grand Central stop, surrounded by helpers: Two police officers, each with a large German shepherd looking down on me in puzzlement, more attuned to seeking out drugs and explosives than assisting passengers in distress; two Metropolitan Transportation Authority officials, and an Emergency Medical Services team from the Fire Department who move me from the now empty subway car to the platform and place an oxygen mask on my face. With personnel from two city and one state agency tending to me, I am costing the city and state a heap of money.

The platform teems with unhappy people caught up in the delay. Never before have I had such an impact on the lives of so many people, for by the simple act of fainting, I bring the downtown East Side subway system to a standstill. On account of me, tens of thousands of New Yorkers will arrive late for work.

The EMS officers place me in a wheelchair and carry me up a jam-packed flight of stairs. They wheel me to a waiting ambulance. In the emergency room at New York University Medical Center, tests establish that I have not suffered a heart attack, but the doctor wants me to remain at the hospital overnight. I decline. Four hours in the emergency room is enough. My fainting may have been caused by the heat and crowding of the subway car and leg injury.

After all the care and attention I have received, I resolve that I will never complain again about train delays; indeed, I will even offer assistance when next I am on a subway and the conductor announces,”We are delayed because of a sick passenger.”

Mumbai is in the midst of building a major rapid transit system. New York’s system dates from 1904. At the start of this year, for the first time in decades, the New York system was extended with the opening of the Second Avenue Subway running from 63rd to 96th Street on Manhattan’s Upper East Side.

It has been a long time in the coming. Numerous groundbreakings in the past went nowhere, the result of war, fiscal crises and inertia. Years ago, “The New York Times” opined, “It is highly improbable that the Second Avenue Subway will ever materialize.” But pressures to build it persisted. The East Side’s only line –the Lexington Avenue –is the most overcrowded subway in the city and nation.

Major tunneling work began in 2007. A 485-ton, 450-foot- long Tunnel Boring Machine was used to dig two deep tunnels through the Manhattan schist, the city’s bedrock, revealing “millions of years of untouched schist.” This dramatic activity took place beneath my feet on Second Avenue, a high density residential and commercial area with heavy vehicular traffic. I live only blocks away. Walking there, I would hear the thud of underground explosions. One explosive device was too large, sending concrete flying on the street, making residents and store owners even more nervous about the project. Year after year of noise, dust and massive machinery on the street tying up traffic. Storeowners howled as customers abandoned them.

The project ended up costing $4.5 billion, far more than projected, and vastly diminished in size, to the north, terminating at 96th Street, instead of 125th Street, and to the south, at 63rd Street, instead of at Hanover Square in the financial district miles away. Plans to expand this bridgehead are unfunded. To borrow the language of the “Times,” it is highly improbable that an expansion will ever materialize. The good news is that 200,000 passengers are expected to use this extension each weekday, taking some pressure off the Lexington Avenue line.

The mezzanine walls of the 72nd Street station are adorned with over three dozen glass mosaics of life-size figures, the work of Vik Muniz, a Brazilian artist and photographer. The figures, evoking smiles from passengers, convey the rich social, ethnic and racial diversity of city residents and subway users. Subways and Central Park are the two most democratic gathering places in the city.

At the main entrance to this station, visible from the street, is a grizzled construction worker gazing at a red ballon, trailing a blue string, floating skyward. Portraying a worker, who toiled for years below ground on the tunnels and tracks, makes for a fitting welcome to arriving passengers, a reminder of the huge effort involved to build this subway extension.

A mosaic on the mezzanine level depicts a black woman doctor, with a stethoscope, in hospital garb. Her face is exuberant. She loves her work. How appropriate a figure for this neighborhood with its many hospitals. There are mosaics depicting tourists, bedecked with camera and guidebook, prepared to embrace the city. A Sikh in a business suit and a sari-clad woman. A man’s attaché case has burst open. He chases after his papers flying down the street. A mother, both arms full, carries her squirming young child, a folded baby carriage and canvas bags. When she boards the train, let’s hope a kind soul will offer his seat.  A teenager is carrying seven boxes marked “pizza.” Pizza and “Chinese,” a favored cuisine of city residents.
On a supporting beam in each of the new stations appear the Latin words , E Pluribus Unum : Out of many, one.
An aspiration of cities with diverse communities, such as New York and Mumbai. I remember years ago, coming upon a poster in Victoria Terminus in Mumbai bearing these words of Gandhi : “Let all of us, Hindus, Mussalmans, Parsi, Sikhs, Christians live amicably….” Encouragement may strengthen aspiration.
Subways and art are a good mix. And poetry! American poet , Billy Collins, who served as Poet Laureate of the United States, composed this poem to celebrate the opening of the Second Avenue Subway :

As you fly swiftly underground
with a song in your ears
or lost in the maze of a book
remember the ones who descended here
into the mire of bedrock
to bore a hole through the granite,
to clear a passage for you
where there was only darkness and stone.
Remember as you come up into the light.