Trump reset has world in fear 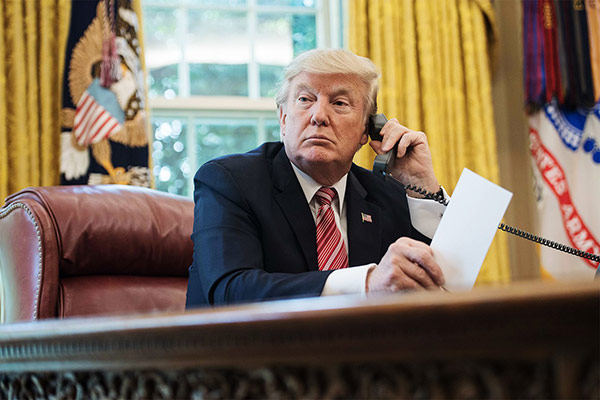 President Donald Trump has just moved into the White House, and has the world worried that he can, and will, repeal any and every legislation previous administration may have incorporated that is not according to his own party’s electoral agenda. Continuity of national policies irrespective of which party governs the Congress, hitherto believed as gospel of democracy, is not guaranteed anymore.

But the world should not forget he is the elected president of the world’s most powerful nation and he is only doing what he had been advocating all along. Trump has surrounded his campaign, and now his forthcoming presidency, on one core value: “Make America Great Again.” Now he is only fulfilling his promises. And like any elected representative of the people he has all the moral authority and obligation to do so. But President Trump is not the only reason for the world to live in fear in 2017.

The Brexit vote in Britain has created fear equally amongst those who voted for as well as those who voted against. Due to this a kind of economic insecurity has swept across the country. Like some other European countries, Germany is struggling with refugee crisis. France has its own woes with elections, where people find no candidate is clean. Italy has its different kind of  political turmoil. Fear and frustration among China’s party and business elites are at their highest level. Provocations in North Korea, the East China Sea, Japan, Taiwan, Hong Kong, and the South China Sea all have the potential to cause an overreaction from Chinese leaders. India and US coming closer will put fuel to the fire.

Last year’s  failed coup has led to even greater political uncertainty in Turkey, especially President Erdogan has been tightening his hold on the judiciary, bureaucracy, media, and business sector. North Korea’s growing nuclear power is worrisome, as the government has substantially advanced their nuclear and missile programs and are set to expand them further. South Africa’s political infighting is trying to undermine the country’s traditional role as a force for regional security. Above all, energy, cyber threat, automation, and forced technological transparency may challenge many governments in 2017. China’s low forex reserves, Europe’s tensed elections and unclear Brexit roadmap have affected market currencies. In fact the world is also suffering from a bad attack of economic pessimism.

A research conducted in 25 major nations by Ipsos shows that the most optimistic country globally is Peru, where 96% of people expect good things from the New Year. This could be a reflection of its continued strong economic growth: over the past 12 years income per person doubled, and the government has just revised upwards its growth forecasts for 2017. France is the most pessimistic country when it comes to people’s expectations for 2017. Asked if they think the New Year will be better than the past one, only half of French respondents (52%) were positive about the outlook for 2017. While significantly more upbeat than their French neighbours, Italy, the UK and Germany also ended up in the bottom tier, with around two-thirds of the population feeling optimistic. India and China follow closely, with nine in 10 respondents feeling positive (91%).

Now coming back to the Trump wave which has started showing its effect not only in the political arena, but also the markets around the world. His protectionist policies and statements have surprised the world. Remember, we said it in our January 2017 edition that people must learn to live with fear of unexpected in the new year and the above mentioned study approves our apprehensions about 2017.