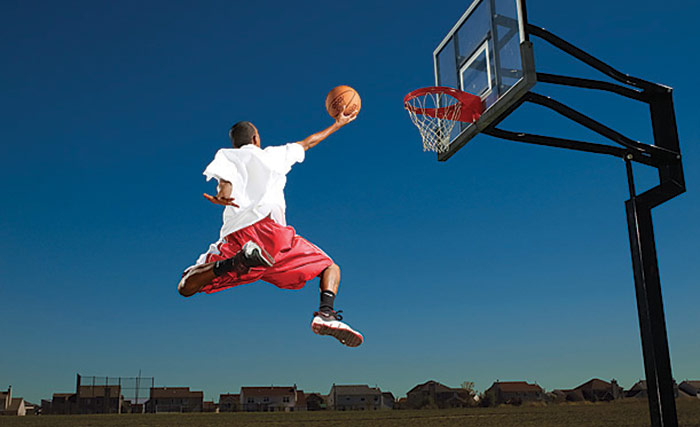 March Madness, also called the Big Dance, has made its annual arrival in the United States. For several weeks in March, extending into April, the top 68 college basketball teams compete for the national championship. Day and night on television, college basketball games blanket the nation. It is an exciting tournament because every game is sudden death. Lose, and you pack your bags and go home. A low ranked team having a good night can eliminate a top ranked team having an off night. March Madness is followed by the National Basketball Association playoff and championship games. The participating professional players receive pay in the millions of dollars.

What a contrast to the humble origin of the game: An indoor activity dreamed up in 1891 by the Canadian-born James Naismith, age 30, a physical education instructor at the International YMCA Training School, to occupy his students during the long cold New England winter months.

In the first basketball game ever played, there were nine players on each team — Naismith had 18 young men in his class — not the present five, and a soccer ball was used. The goals were not metal hoops with nets, but two half-bushel peach baskets with closed bottoms, provided by the janitor, and nailed by Naismith ten feet above the floor at both ends of the gym. After each score, someone had to recover the ball from the basket.

The department head had asked Naismith to create an indoor game and to “make it fair for all players and not too rough.” The first game resulted in several black eyes, one separated shoulder, and one player knocked unconscious. To calm things down, Naismith developed rules, like no running with the ball and no tackling. (The game can still be rough. I was recounting a season’s injuries to a teammate: A broken right wrist, calf and ham-string injuries, and two black eyes. His unsympathetic response: “Black eyes don’t count.”)

As top college and professional teams compete for public acclaim and money, across the land, in cities, small towns and rural areas, hundreds of thousands, perhaps millions, of others like me, receiving neither acclaim nor money, play year round in gyms, parks and on the streets for the sheer joy of the game. I ask Mark, a teammate, to describe his love of the game. “Basketball is a game of physical intensity, constant decision-making and balletic beauty.” To his words I would add, it is a collegial undertaking where everyone on the court participates as shooter, rebounder, dribbler, passer and defender. In basketball, there are no fifth wheels. Everyone is moving and engaged. Basketball is the most played sport in the United States, and for good reason.

I started playing early in life. The math teacher in elementary school wrote of me: D is for Dean, who is as thin as a lathe; His basketball excels his performance in math. At Collegiate School, I was the captain of the high school team. Basketball was then the center of my life. When walking my dog late at night, I practiced dribbling on the sidewalks of New York. To improve rebounding skills, before going to bed, to the intense annoyance of the 15th floor neighbors below us, I jumped up to touch a ceiling beam in my bedroom one hundred times.

Our team record was spotty, except against the Staten Island Academy. We always beat them. I loved the ferry boat ride over to Staten Island and back to Manhattan. A few days after each game, I would bicycle the seven miles from 96th Street on the Upper East Side, where we lived, to the ferry terminal at the southern tip of Manhattan Island to purchase a copy of the “Staten Island Advance.” With not much happening on Staten Island, our games were extensively covered by the local newspaper. Being the top scorer, my name figured prominently in the articles. On lucky days, from the ferry I would see the Queen Mary, with her three smokestacks, emerge from the mouth of the Hudson River into the Bay and continue her royal progress toward the Narrows and the sea beyond.

One day I received a telephone call from the basketball coach at Columbia College asking me to come up to see him. I did so. He had heard good things about my basketball skills and wanted me to attend Columbia and play for the team. Our conversations ended when I found myself going to Harvard.
At Harvard I had every intention to try out for the team, but was prevented from doing so by receiving two “D” grades, making me ineligible for a varsity team, but eligible for academic probation. The setback led me to drop basketball and change to intramural soccer and squash, and on warm spring afternoons, sculling on the Charles River. I emerge from college an honor student, but without the laurels that accompany successful athleticism.

I did not play basketball for the next 37 years, from the age of 18 to 55, pretty much limiting my physical activity to walking — New York is great for this– bicycling and tennis. One day at the Lenox Hill Neighborhood House, on East 70th Street, I was in the fitness room, bored to death using the exercise machines, when a basketball player from the gym barged in and yelled at me, “Hey, you, we need a tenth!” I succumb to his charm and eloquence and return to playing the game. That was 25 years ago.
To make up for lost time away from basketball, I now play several times a week. The group I play with, both men and women, range in age from 26 to 80. A jolly group.

Basketball is a generous sport to old-timers. On a soccer field I would last two minutes with the non-stop running. Basketball is a start and stop game, providing me with opportunities to catch my breath. Also, while speed and reflexes diminish markedly with the passage of years, I have a remarkably good shooting eye which has not changed. I win many shooting contests against far better players. When a new young player is assigned to guard me, I fall back on cunning. Before the game starts, I ask him, “Do you have a grandfather?” If he nods, I say, “I want you to treat me as you would your grandfather.” Politeness requires him to let me grab a few rebounds and grant me the time and space I need to launch my one-handers.

My game has one negative aspect: I swear. At a recent college game I came upon a “Sportsmanship Code of Conduct” posted on the gym wall. This provision shamed me: “Profanity will not be tolerated…..[and constitutes] ground for removal from the Athletic Facility.”

Yes, I am an offender, but in my defense, there are certain Old and Middle English words that cry out to be used when making an errant shot or missing a game-winning, unopposed layup. The words, I might add, appear in “The Oxford English Dictionary (Sixth Edition) and doubtless are in the five earlier editions. Alas, I don’t expect much improvement in this department. Bad habits are hard to break.

Through basketball, I have come to meet people from diverse backgrounds who I otherwise would never have encountered, both fellow New Yorkers and those in foreign lands where I have played. Basketball players, the world over, share a bond that overcomes barriers of class and language. In Chile, high in the Andes, I have played with Indian boys where the air is so thin that my shots go flying over the backboard. I have played at sea level in Amsterdam by the Rijksmuseum with its fabulous Dutch art treasures. When I am in Paris, I start my day in the Luxembourg Gardens writing by the sailboat pond, and then proceed to the basketball court, making me feel a true Parisian.

In Rajasthan, I try to coach fourth grade girls in basketball. Not easy. With boundless energy, they grab the ball from each other, rugby-style, not unlike the players in the very first game before Mr. Naismith changed the rules. In Hanoi, I arrive at the basketball court on a motorbike, clinging for dear life to the waist of Mark, who had woven through immense late afternoon traffic jams with great skill. At the conclusion of the game, Mark announces, “Now it’s time for warrior food.” Mystified, I get back on his motorbike. We speed through the city, past the Ho Chi Minh Mausoleum and Ho Tay Lake with its swan boats, to a local Carvel, where we partake of chocolate ice cream.

With experiences like these, you will understand why I continue to play basketball. Thank you, Mr. Naismith, for enriching my life.