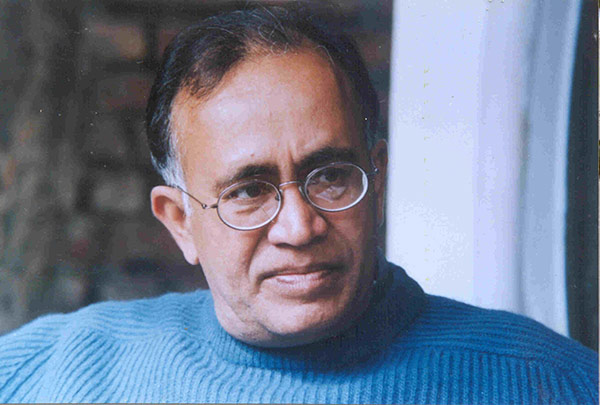 In the space of a few months, publication of two books by the author of The Everest Hotel fame: The China Sketchbook, and Zelaldinus, I Allan Sealy is at white heat again to balance a period of apparently going slow in the last decade. He is recipient of Commonwealth Writers’ Prize, Sahitya Akademi Award, Crossword Book Award and Padma Shri. The Everest Hotel was shortlisted for Booker Prize in 1998. I met him and his wife Cushla when Sealy came to Kolkata to attend Anglo Indian conference as a keynote speaker in January.

You once described yourself as a long distance runner. Do you think you are now close to the finish line? Somebody else described it… Quite a long way to go, but I may run out of time. In terms of how far I see the number of books left to write seems to be quite considerable. Certainly I want to write a history of the Anglo-Indians that’s uppermost in my mind.

Haven’t you already done that in your first novel Trotter-Nama? That’s of course the fictional version of the history. Now I want to do non-fictional work, not necessarily strict history, but an imaginative history, which imagines the condition of the individual and the kind of house, for example, a family of another century might have lived in. That especially for me is quite fascinating: the centuries, the large, dark areas that I’ve not considered before while writing Trotter-Nama.

It’s as if with every book you strip away a dead self and turn over a new leaf. What kind of transformation you undergo each time a new brainchild is born? To start with, you’ve already become a different person. The passage of time has rendered you different. It has rendered you older. In other words you’re capable of doing less. For example, The Small Wild Goose Pagoda was about the building of house. It was possible for me then to carry six building bricks at one time 10 years ago. Today I’d lighten my load simply because physically my capabilities have dwindled. So that kind of change also steers you to a certain kind of direction. Mentally your aptitudes have changed, your interests have changed, so the kind of book you’re likely to write are going to be different, willy-nilly, only because of your physical state which has altered your mental state. That kind of shift…

Do you think you have changed after the passing on of your father? Certainly. That’s a crucial event in my life. An entire book would come out of that if I simply focused on that year of caring for him. At the end of that year (2014) mentally and spiritually I was a different man. In this way every book that I’ve contemplated in the past would either have stepped forward or stepped back as a result.

David Davidar is very appreciative of your work. What’s your impression about this gifted editor?  As you say he’s an exceedingly gifted editor. He knows his subject. He reads voraciously. He knows just about every book that has been written by an Indian in English in the past 30/40 years. He was, as you know the chief of Penguin India and he nursed the independent publishing of Indian writing in English from the very beginning. He knows his field. He himself is a poet. This is one reason I went to him. I can cast my eyes over the present editors in the land and I’d choose him before I chose anybody else. When you’ve written something you also want to know whether this man is capable of appreciating it fully. That confidence I had in him. So I sent my MS (Zelaldinus) to him…

You’re invited for the Anglo-Indian conference here in Jadavpur University, Calcutta University and Victoria Memorial, Kolkata. How did it go? The conference was organized by Jadavpur University in association with New Zealand India Research Institute. The anthropologist behind organizing this had done her work on the Anglo-Indian community and for the past ten years she, Dr Robin Andrews, has been working on this field. She invited me. We had done a previous engagement together on this very subject two years ago in IIT, Kharagpur. This was a different set of academics, different set of papers, but with the same focus. I was one of the keynote speakers. The event at Victoria Memorial was the closing ceremony of this conference. There’s another seminar at Calcutta University focused on the same Anglo-Indian community. That’s where I read poems from Zelaldinus for students while Neal Hall, an American poet of distinction, read from his work.

Could you provide a short synopsis of Zelaldinus?

Its sub-title is a masque. So it’s a kind of theatrical production. It’s staged on a real stage in Fatehpur Sikri, which was built by Akbar in his day: an outdoor stage in the form of a chessboard. On that very stage he used to present theatrical production. So I’ve imagined my production as being staged there. Here’s a series of poems all connected with a narrative running through it. The story is of a narrator who looks like me, goes to this place, sees the ghost of Akbar, and they both recognize each other from their school days and they begin a conversation about India as it is today. That’s the story … a dead city brought to live.