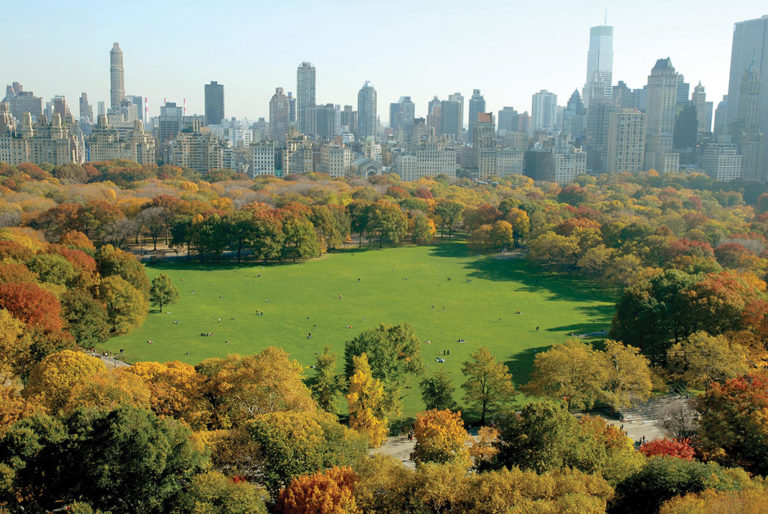 I was born in Flower and Fifth Avenue Hospital on 106th Street across from Central Park and not, as I sometimes claim, found under a mushroom in the park. From the start, Central Park has been an important part of my life.

Never having owned land, Central Park is my sole encounter with real estate – my year-round country place. Thus, when I read that Vladimir Nabokov inherited a 2,000-acre estate from his uncle just prior to the Russian Revolution – neither the best time nor place to be inheriting land – I thought, “That’s more than twice the size of my 843 acre park.” My youth was so centered on Central Park, to the exclusion of other parts of the city that I would argue with my sister when she claimed that Manhattan was an island. She turned out to be right. Elinor attended a school by the East River where she saw tugs pass each day.

At school, we played soccer in Central Park on the East Meadow at 98th Street and Capture the Flag on a nearby rock outcrop – metamorphic rock called Manhattan schist, said to be 450 million years old. It was here that I acquired an historical perspective and bloody knees.

Each morning before school, I walked my dog along the bridle path by the reservoir in the park. How I enjoyed the 96th Street playground with its swings, slides, seesaws and water sprinkler, a welcome place to be on scorching summer days. In the fall, the nearby trees produced beautiful mahogany-colored chestnuts encased in prickly rinds. I placed chestnuts on the window sills in my bedroom where they remained until spring.

Over the years, in all seasons, I have enjoyed bicycling in the park. In summer, entering the park from steaming streets, I experience a welcome temperature drop of several degrees and the aroma of grass, flowers and trees. On my bike, I pass the Sheep Meadow and head for the ball fields where I sit in the stands and watch games and gaze upon the dramatic skyline of Central Park South.

In the early evening, I pass horse-drawn carriages on the Park Drive. Glancing down Seventh Avenue from the park, I see the lights of Times Square in the distance. The curtain is about to rise on evening performances at Broadway theaters. Central Park food venders wait with their carts to be picked up by trucks after a long work day. Darkness arrives. Fireflies miraculously appear. With lights flashing front and back on my bicycle, I join the fireflies.

My mode of transportation transforms routine trips into adventures. I enter the park on my way to a friend’s apartment for dinner. The sky is clear and the moon bright.

On Pilgrim Hill the cypress trees stand like sentinels in the night. At the top of a steep hill I reach the obelisk commissioned by Thutmose III who ruled Egypt from 1501 to 1447 B.C. It took only 38 days to transport the obelisk from Alexandria to New York in 1879 and 112 days to move it by specially constructed railway from the Hudson River landing to this site.

Across from the obelisk stands the Metropolitan Museum of Art, brightly lit and crowded with Saturday evening visitors. I experience more of ancient Egypt. Visible from the park is the museum’s Temple of Dendur. Two minutes later I return to the 20th century in the form of Frank Lloyd Wright’s Guggenheim Museum.

By purchasing a beach chair, I have saved myself hundreds of thousands of dollars. No need now to buy a country house. I carry the beach chair, four blocks from my apartment to Fifth Avenue and 72nd Street. Just inside the park is the East Green. I open the chair and plunk myself down, removing my sneakers and socks. Here, with my bare feet on the cool grass, I relax – a veritable Lord of the Manor — and watch New Yorkers at play and squirrels posing for tourists. (In a city of performers, park squirrels are no exception.)

New Yorkers live physically confining lives in apartments and offices and share crowded sidewalk and subways. We need the park to stretch and unwind. Owning a beach chair means no mortgage, no leaking roof, no entertaining of demanding guests and no constant packing and unpacking of bags or having the thing you need most somewhere else. And no need for a car – a huge expense. To garage a car on my block costs $750 a month, plus a hefty tax.

Making certain that no one sees me, I embrace the trunk of my Central Park tree, a red oak planted in the 1920s on the East Green. It is “mine” because the tree has been endowed in my name by board members of Volunteers of Legal Service on the occasion of my retirement after 25 years as executive director.

Before embracing my tree, I first had to select it. I visit two favorite places in the park. The first is just south of the zoo. Years ago, there was a pony track here. As young children, my sister and I were placed in a pony-drawn cart and led around the track by an attendant. The pony track is long gone. On this site in 1995, I arranged for the planting of two southern magnolia trees, the favorite tree of President Franklin Roosevelt, following my visit to Warm Springs, Georgia, to attend the ceremony commemorating the 50th anniversary of his death. For a period of years I had the pleasure of watching the trees grow and then, alas, wither, succumbing to the city’s winter weather.

The second place I visit is the East Green where I have spent much time over the years writing and reading beneath the branches of a red oak tree. From here I would look up to gaze at the meadow and trees; at the Frick Mansion across Fifth Avenue, recreating in my mind some of the treasures within – paintings of Giovanni Bellini, Titian, Holbein, Rembrandt – and at the stately facades of Fifth Avenue buildings.

I select the red oak as my tree, a proud, handsome tree, standing 60 feet tall. On hot summer days I continue to enjoy its shade and listen to the sound of its swaying branches. At night I watch fireflies dart around the trunk. In the fall, I admire its bright orange leaves. Every second year I collect the acorns it sheds and, as in past years, place them on a window sill at home. In winter, I visit my tree as it braves the elements.

The Portuguese writer Jose Saramago, in “Small Memories, A Memoir,” describes his father late in life going from tree to tree in his garden, embracing their trunks and saying goodbye to them, to their friendly shade, to the fruits he will never eat again. Late in my life, when the end is near, I will do the same.

And when I pass from the scene, my ashes will be placed beneath the tree.

Postscript: Central Park is a man-made work of art. The codesigners were Frederick Law Olmsted, superintendent of the park, and Calvert Vaux, a London-born architect. The site chosen for the park was a place “where an irregular terrain of swamps, bluffs and rocky outcroppings made the land undesirable for private development.” The creation of the park was an enormous public works project involving 20,000 workers.

“They blasted out ridges with gunpowder…, removed nearly 3 million cubic yards of soil, and planted more than 270,000 trees and shrubs….” (The Encyclopedia of New York City)

The park opened in the winter of 1859 when thousands skated on lakes built over former swamps. By 1865, there were more than seven million visitors to the park a year. Central Park is the most democratic place in the city. Here gather together New Yorkers of all races, national origin and incomes, achieving, thereby, a central objective of the park’s designers.