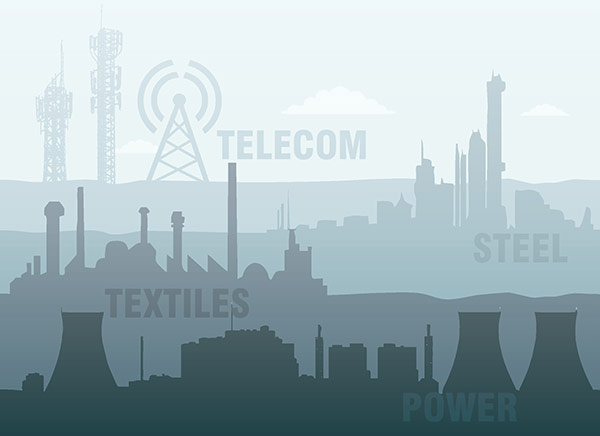 The phoney financial markets currently flirting with record highs and the underlying real economy struggling with earnings and job growth are exhibiting unparalleled paradox. Domestic benchmark equity index Nifty is trading at a PE multiple of 24 while small-cap index trades at 70, three-times the valuation premium. There is another divergence: Companies are queuing at the Insolvency and Bankruptcy Board of India (IBBI) filing for corporate insolvency resolution plan (CIRP), aka Chapter-11 bankrupcy filings in the US.

We also know the party is at its peak when it’s just about to end.

History provides enough proof the weakest investors join the euphoria at the end of the bull market. This bull market has run its course for eight years since the March 2009 lows and is throwing signs that the ride for equity investors from mount-9300 Nifty onwards may be very challenging.

Notwithstanding government high-decibel propaganda on the state of the economy, corporate earnings growth is missing, jobs are elusive but consumer goods and asset prices are steadily rising. Since the turn of the year, bankruptcy is a new buzz-word in banking circles as corporates line up for insolvency and bankruptcy filing.

Bankers perhaps never had such a bad time ever in the past, and corporates never so good. Banks want to rid themselves of the non-performing assets (NPA) to clean up their books to do fresh business and failed corporates are too eager to obtain a favourable hair-cut of their outstanding loans and clean-chit to re-start new ventures. During the first four months of 2017, about 60 companies have already knocked on the doors of the National Company Law Tribunal (NCLT) for Insolvency Restructuring Plan. These include some well-known names. Practitioners say the number is likely to touch 1,000 by next summer and perhaps 5,000 by the time Mr Narendra Modi seeks re-election in 2019.

Steel, power, textiles, infrastructure and chemicals are likely to dominate the list of failed companies seeking bankruptcy proceedings. The sunrise sector of the recent past, telecom, is also likely to show up for seeking a hair-cut. Paradoxically, some of these companies are traded on the markets and investors hoarding these shares assuming there is fire left in these stocks. They will be dealt a rude shock.

Ridding bank balance sheets of stressed asset are key to reviving credit growth. Without this the government can’t go ahead with its many plans. The foremost amongst them all is the creation of more jobs. Various schemes proposed by RBI to resolve the problem have been unsuccessful, with lenders reluctant to write down assets sufficiently and company owners unwilling to negotiate repayment plans.

How situation got worsened?

A loan becomes bad, or a non-performing asset (NPA), when the entity to whom the bank has given a loan does not pay interest on the loan for at least one quarter, i.e. 90 days. Under the RBI  guidelines, at that point the bank has to formally recognise that the loan will not be repaid by the defaulter company. After that the bank has to break the news to its shareholders and put away 70% of the value of the loan to make good the loan on its book. This impairs the capital of the bank, and when a lot of such capital is impaired across all banks – Rs 6.7 lakh crore as on September 2016, it hurts the banking industry badly. The sum is 9.55% of the total loans advanced by the entire banking industry. In March 2002 it was Rs 1.3 lakh crore or 2.83% of the total loans from the banks. When such a large NPA arrives on the books of banks, the banks keep on trying every possible trick to delay the recognition of the problem i.e. delay the NPA from being red inked on their books. Even after the NPA is recognised, they refuse to take the next steps. The promoters try to duck their debt. They can make good on the money by liquidating their equity or fixed assets. Instead at times, they keep on holding unending discussions with the banks to settle their dues. It seems they follow the dictum of HW Arnold, who said that the worst bankruptcy in the world is the person who has lost his enthusiasm.

Bankruptcy! It’s part of a restructure

In September 2013, when Raghuram Rajan took over as RBI governor, he had hounded the banks to bring their NPAs out. By 2015, the RBI had begun to issue alternative guidelines to banks on ways to settle them. Apart from the pre-existing Corporate Debt Restructuring (CDR) programme running from 2001, a new one the S4A or Scheme for Sustainable Structuring of Stressed Assets was introduced. Since there is no penalty involved for companies in invoking CDR, the volume of cases signed under it has multiplied. A company gets protection from being declared insolvent and yet does not have to pay its creditors as long as it lives under the CDR umbrella.

Earlier, there was no bankruptcy law with teeth to make banks force on recalcitrant or plain unlucky companies whose business decisions had floundered. And there was no political will. It had been happening, but the scale of loans from 2012 onwards, is humungous.

The government set up the Insolvency and Bankruptcy Board of India in 2016 that puts a timeline along with easy-to-implement rules to make companies that cannot survive declare bankruptcy. The options for a company that has made a bank declare its loan as an NPA can either declare bankruptcy and go under the hammer or it can opt for the S4A programme to rebuild its finance. The only difference is that before switching it on, the banks will ask the RBI to approve the proposal. Armed with the support from the RBI, the banks can push the companies hard to stick to the timelines and force a closure even against the approval of the company.

The amendment to the Banking Regulation Act makes it possible for the RBI to get into the day to day affairs of the banks it regulates. Now the RBI can direct banking companies to resolve specific stressed assets by initiating insolvency resolution process, where required. The RBI has also been empowered to issue other directions for resolution. Even after this without a political support, no government bank would have moved into the resolution of India’s biggest financial sector challenge.

The new ordinance buys an insurance for the banks against action by the Central Vigilance Commission (CVC), the Comptroller and Auditor General of India (CAG), the Central Bureau of Investigation (CBI) and the courts. The insurance is against the possibility of action against the management of the bank by any one of these entities on charges of corruption when the bank proceeds to clear up a bad loan from its books of accounts.

Stressed assets, restructured debt and advances to companies that can’t meet servicing requirements have risen to about 17% of total loans. There are reports that the RBI wants to resolve the 60 largest delinquent-loan cases in nine months and it plans to set up a secretariat to oversee the resolution process for the biggest defaults by loan amount. The cabinet’s approval to amend the Banking Regulation Act is in that direction. Laced with this the RBI will have more powers to govern lenders and address bad loan issues.

And the market rally

However, on the Dalal Street everyday new records are being made. On the strong economic optimism and expectation of normal monsoon markets have reached to new highs. The markets rallied 17% in the last fiscal and FII inflows also surged towards the end of the year with a rally in rupee. The expectations have strengthened the rally further with markets reaching new highs in April-2017. At present markets are valued at 1 7.9x of 1 year forward earnings while 22.3x on TTM earnings.

So first time in the history this rally is more Made in India. First time the retail investors have uprooted foreign portfolio investors to emerge as the biggest participant. While the latest 10,000-point gain to 30,000 took around nine and a half years, it, probably, is the most significant for Indian investors because the beneficiary this time is domestic retail investors. This is a welcome move, but also a worrying factor since investors are not much informed.