‘My Feudal Lord’ and the seventh wife 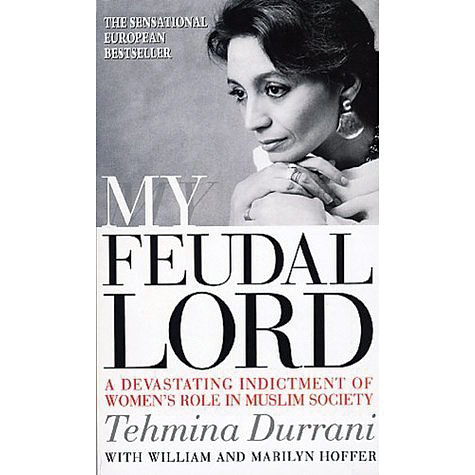 She was the most oppressed, compromising, frightened, docile and clinging wife of a well known politician in Pakistan. She suffered for 15 years. Angry and disillusioned about her fate, she demanded a divorce. She got it. The pain and anguish and the long oppressed sufferings came out boiling. She had to share them to live peacefully. And there is no other tool which can satisfy this urge in a more profound way. She took the pen and wrote her autobiography. She visited the library to collect the materials: it was her own mind. Out came the book ‘My Feudal Lord.’ The Writer was Tehmina Durrani. This book was published in 1991 in Pakistan and took the country by storm. In fact, this is a personal account, but covers different aspects of life and society. I chose it here this month for obvious reason.

Tehmina Durrani got married at eighteen with Anees a ‘very gentle and nice fellow’ in her own words. Immediately after her marriage, she was wooed by the Punjab Governor Malik Ghulam Mustafa Khar whom she later married and became his seventh wife.

After Zia Ul Haq’s coup in 1977, the Khar family fled to London and came back to Pakistan in 1984 after a self imposed exile for nine long years. Mr Khar contacted Indira Gandhi and persuaded her to attack Pakistan. His Indian connection was caught by Pakistan president and dictator Zia Ul Haq and he was put behind bars though on other grounds. When the man was released, he fell in love with the sister of his seventh wife. Tehmina was furious. She was able to convince her younger sister, but could not save her marriage. A miffed Mustafa married a 22- year old girl. There was a difference of thirty five years between them. Now Tehmina was a free bird. She joined the Muslim League.

What I loved in the book was the lucid details as she writes about politicians, conspiracies and historical events. Her sentences are very catchy when she writes about a politician: “He has to have a thick skin on him; if the mud sticks he merely shrugs it off and goes on. They breathe the oxygen of publicity. For them the bad press is better than no press at all.”
For the new entrants in the world of politics, she has this to say, “Always detonate. Never defuse. Stand clear of the explosion. Walk into the smoke. Pick up the pieces. Make your comrades redundant. Stand tall. Let the things deteriorate. Accuse when the time comes.” It seems Indian leaders have digested these golden formulae and as such they have sidelined the theory of re-structuring the society. As they know that they would be redundant in the new order they speak of in a choked voice.

The black spot in the history of Pakistan ‘The hanging of Zulfiqar Ali Bhutto’ is well covered. Even the minute details are very clearly written. The author mentions the well-known fact that there was a high drama when Zulfikar Ali Bhutto and Ghulam Mustafa along with Mr. Jatoi, forced the then commander in Chief Gul Hasan to sign his resignation letter which was drafted by none other than Z.A. Bhutto. Gul Hasan was the king maker and responsible in installing Bhutto. Later he was made an ambassador. Bhutto installed Zia-Ul-Haq and the General eliminated him. Pakistan politics is full of such vulgar and inhuman episodes. Episodes which have changed the facets of the country.

One is bewildered to note with sympathy and agreement that at one time most of the Pakistani’s felt that the Pakistan army is the root cause of all their problems. They believed that the army has to be destroyed. It is more shocking that they think India could be persuaded to move against the army. “They contend that the Indians are just the means to an end and not the end of Pakistan as a country.” They still believe that the rank and file of the army are patriotic the Generals are traitors. Ghulam Mustafa Khar belonged to the same school of thinking. He met Indira Gandhi, the then Indian prime Minister, and discussed with her the plan of action to execute his thinking. Indira Gandhi was enthusiastic and replied, “We will have to crush and humiliate your army, only then can our two countries live in harmony only then can you hope to restore the rule of civil law in your country.”

But her tragic assassination curtailed the plan. Later Mustafa was able to convince Rajiv Gandhi. A plot was hatched by Ghulam Mustafa. His boys would plant a bomb timed to go off when the military top brass convened for a meeting. The Indian government was nowhere involved in this plan, but was not unaware of. Authenticity of this claim, anyway, can not be confirmed. But if the plan would have been a success General Zia-Ul-Haq and his closest associates would have met the fate which they received six years later. Justice is Poetic.

‘My Feudal Lord’ is absorbing romantic and titillating. A very important book for all those who are interested to know all about human relationship, political intrigue and hypocrisy prevalent amongst political personalities. There are some interesting and lucid details. On the personal front Tehmina has revealed her life threadbare. Each incident and accident. She has written about her love affair even when she was Mrs Anees in detail. Frame by frame, little bothered about the reader’s reactions to those saucy details. I was shocked to what extent a woman can travel in her relationship with her husband if she falls prey to another man.

Here I quote one incident. Mustafa called Tehmina and said he would come over to her house at once. “But how? Anees is at home.” Tehmina answered.
“Don’t worry. I will get him out of the house, fast.” It was Mustafa.
The phone rang two minutes later. It was for Anees to come over immediately at the Governor’s house. He left. Mustafa came over soon after.
“Where’s Anees?” Tehmina asked.
“Swimming.” Mustafa had told Anees to have a dip in the pool as he had to go off on urgent business. Mustafa’s friend, Rauf Khan goaded him in the pool. Every time he came out Rauf pulled him back in encouraging him to stay in the water. Tehmina writes, “While he did his enforced laps. Mustafa and I were together.”
The phone rang. “Sir, we can’t keep him in the water any longer.”
“Let him out in five minutes. Tell him I have just called I will be there in fifteen minutes. We collapsed in laughter.”

For a woman to reveal her intimate secrets may be considered obscene, but don’t you agree silence is a greater crime. Egoism, hypocrisy, nepotism and tyranny are the themes that dominate this book and its characters, the author included. Her own lifestyle is incredibly opulent. She spends much of her time doing exactly as she pleases, and yet she wants to portray herself as some type of heroic figure. Surprisingly Durrani never challenges the Islamic point of view; instead she challenges male chauvinism in a feudal and intolerant society. It’s sometimes almost evident that she has concealed or simply ignored some necessary details. But as the saying goes – writing a biography is like an onion: peel away one skin and many more remain.
Tehmina says that “bold actions come when one has no support system. While you’re left alone to fend for yourself, you’re also free to become a warrior of your own choice. And you indeed become one.” And she is right.

Tehmina sketches the burdens of guilt shared by millions of women in feudal societies. But the first time when I finished the book I was not much concerned about the pathetic conditions Tehmina was brought by her feudal lord. In fact, she deserved it. After all she had done the same with some other women and her own loving and caring first husband Anees. She was instrumental in breaking Mustafa’s ex-wife Sherry’s marriage when Sherry was pregnant. She was equally responsible and not innocent at all since she left her first daughter to marry her feudal lord. So she doesn’t come off as such a devoted and loving mother and secondly, when her younger sister falls into the honey trap of her preying husband, she looks at her as a sort of a rival who was trying to steal her husband rather than making attempts to rescue her from his clutches.
Tehmina writes in her defence that “many forms of expression are required to break out of the multiple confines that imprison the soul. Writing and Painting are just two of them.” Read it if you have still not.