The Owl was a Baker’s Daughter 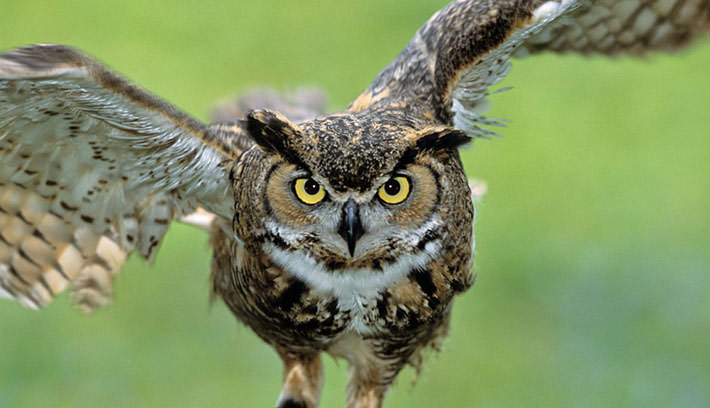 Hindu mythology talks at length of ‘muppathu mukkodi thevargal’, the innumerable celestial beings who rule all the three into seven worlds. Each god is blessed with a vehicle – bird, beast, rodent and even a reptile.

Brahma, the creator, and his consort Saraswathi, the goddess of knowledge and wisdom, use a celestial bird called Hamsa as their vehicle. This bird is neither a swan, nor a duck nor a goose nor a pheasant nor a peafowl. It is a perfect mixture of all these birds and yet is not attached to any of these. It is a strange bird that neither belongs to the earth nor to the water nor to the sky. But it has the wisdom to separate water from milk. The next in the Trinity is Vishnu, the preserver of life. His vehicle is Garuda. This bird is a copper coloured eagle with a white head, neck and breast. Brahminy kite is another name given to this bird. Lakshmi, Vishnu’s wife, has an owl for a vehicle. While the first two lords and their consorts like to have birds, the third in the Trinity, Siva and his wife Parvathi prefer animals to birds. Bull, also known as Nandhi, is Siva’s vehicle and Parvathi loves to ride a lion. Of their two sons, Ganesh, the elder, has a mouse for his vehicle but Subramanya, the younger, travels on a peacock.

Yama, the Lord of Death, uses a buffalo. The rain-god Indra parades the Heaven and the Earth on his Elephant. Ayyappa, the net result of the physical union between Lords Siva and Vishnu, roams the mountains and the forests on a ferocious tiger. The god of Love, Manmatha and his beautiful wife Rathi, goddess of love, use the birds Hamsa and parrot respectively. The two great celestial lights, Surya, the Sun god and Chandra, the Moon god ride on wheeled chariots pulled by ten horses and seven horses respectively.

It is not without any significance, these special vehicles are assigned to the gods. These privileged vehicles represent the power and energy of the gods and goddesses they carry. Perhaps this is the reason why Hindus worship birds and animals. These vehicles hold testimony to the proverb: Love me love my dog. This is true of snake worship too. A hooded snake is always found in a coiled position on the neck of Siva and Lord Vishnu rests on the multi-headed cosmic serpent Anantha. While on the one hand fear of the reptile has given place to deification and worship, it is the latent mystic power of the individual, on the other hand, is like a cobra coiled at the base of the spinal column referred to as the ‘kundalini’.

Of all the vehicles of the gods, the owl takes the cake. It is blessed with enormous eyes that can see well in even the faintest of light. Its ears can hear the faintest of sounds – even the distant sound of a squeaking mouse. It can fly silently for its wing feathers are very soft. And once its prey is at sight, the owl grabs it with both feet, killing it instantly. Then it swallows the food whole. After several hours, the owl coughs up the fur and large bones of the mouse. Pellet – that is the name given to the coughed up lump. If the owl is not an apt symbol for an active scholar, where is symbol to be found for the scholar?

It’s no wonder that Lakshmi, the goddess of wealth and prosperity, has an owl for a vehicle apart from an elephant. Perhaps she uses elephant while travelling on land, and owl for her visits to the sky. Lakshmi is an Indian counterpart of goddess Minerva of Roman mythology and goddess Athena of Greek mythology. All the three goddesses, associated with wisdom, have owls for their vehicles.

In North American Indian (Pimas) mythology, the owl is a symbol of the souls of the dead. Like the Pimas, we Indians too believe that if an owl happens to be hooting at the time of death, it is certain that the owl is waiting for the soul of the dying person. It is the luring cry of Yama, Lord of Death. The Egyptian hieroglyph for owl symbolizes death, night, cold and passivity. In medieval Christian folklore the owl is seen as a demonic force; its very presence an ill-omen.

Folklore has it that the owl feathers are rushed to the dying person to help him/her reach the other world with little or no difficulty. An interesting British folktale tells how Jesus changed a girl into an owl for her miserly activity. It must be mentioned in passing that the Bible remains silent to this tale.

Once Jesus in disguise walked into a baker’s shop and begged for bread. The mistress of the shop took pity on the poor hungry man and immediately put some dough in the oven. Her daughter considering that too much, reduced the quantity to half. Not satisfied with her own action, she went again to the oven and further reduced the dough. But a miracle happened. The dough began to rise and rise in the oven, pushing open the doors and falling across the floor. Its very sight made the stingy girl cry “heugh, heugh, heugh”. Jesus who heard her cry like an owl turned her into an owl.

William Shakespeare in his play Hamlet (Act.4, Sc.5) makes Ophelia answer King Claudius’s question “How do you, pretty lady?” thus: “Well, God, ‘ild you! They say the owl was a baker’s daughter. Lord, we know what we are, but know not what we may be. God be at your table!” Wasn’t Shakespeare familiar with the British folktale?

In spite of all the medieval bias that identified the owl with ill omen, numerous motifs associated with the owl abound in world literature. But for its association of wisdom and prosperity, Goddess Lakshmi would not have chosen this nocturnal bird of prey with large eyes and a broad head as her vehicle. The fact that the goddess has treated the bird on a par with an elephant (another vehicle of Lakshmi’s) is quite remarkable.