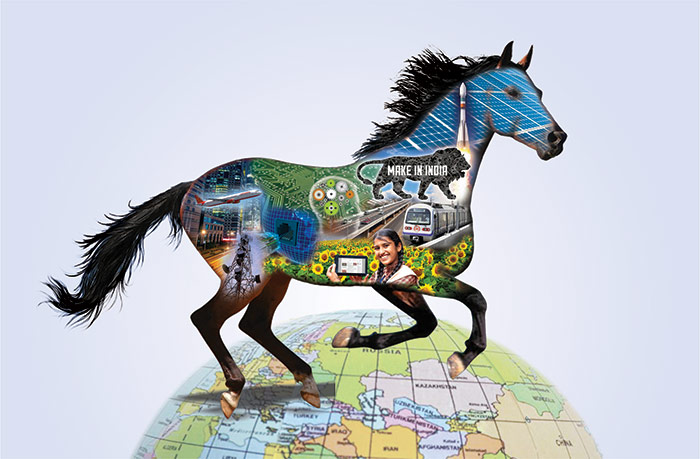 The promise of Bijli, Sadak and Paani was aphorism to win elections in the past seven decades in India. But peoples’ needs are changing and aspirations rising with open and deeper informational channels. With cooking gas in every kitchen and virtual bank in every household, digital education is helping people not only aim to be literate, but also financially literate. Villages are becoming mushrooming towns. Tier-3 towns are growing to Tier-2 level. 68 cities with population more than a million. Connectivity, physical and digital, is the key to transformation in social and business lifestyles. India is now attracting record FDI to build roads, railways, airports, smart cities, affordable housing, lower healthcare prices, digital highways and twenty-first century education. All that to improve connectivity and serve increasing masses: Anything, Anyone, Anywhere. And transform their lives forever. This decade will see rural Bharat converging with urban India. Be ready to ride this wave of new prosperity.

In 2013, India was labeled among Fragile Five economies. Before the Modi government was sworn in 2014 in a dramatic turn of events, the country was running the risk of a sovereign rating downgrade which could have led to its isolation from global capital markets. Today, the situation has turned around with talks of a possible rating upgrade. The new government took various decisive policy actions that led to the transformation. Certain immediate domestic reforms have given instant results. The Make in India, Skill India, fuel price deregulation, re-contouring of the FRBM and GST are the structural reform pillars which will enable boosting India’s potential GDP growth by at least 1.5% in the medium term. The setting-up of the NITI Aayog, the creation of the MUDRA Bank, the codification of insolvency and bankruptcy procedures, Monetary Policy Committee, and RERA are the institutional reforms which will help sustain 8-plus% GDP growth in the near future and 9-10% beyond 2020. India took 31 years to increase the size of its economy by 10x to $2.3 trillion. Doubling that would take less than ten years, most international and domestic economic research houses say.

Last three years, the Indian economy is brimming with optimism. The government has undertaken a string of reforms which in turn are providing sustained incremental benefit to the economy as whole. With twin deficits under control, moderate inflation, “ease of doing business” was one of the first objectives of this government. Various policies and reforms outlined earlier were tailored around this objective. Ease of doing business was one of the first objectives of the Modi government. Thanks to demonetization, the country has added 9.1 mn new taxpayers in 2016-17, representing 80% jump over the previous year. Going forward, this is likely to boost India’s relatively low tax/GDP ratio of 11.3% in 2016-17. Vocational training under skill development is getting further energised through Stand Up India and Start Up India. MSMEs generate close to 45% of the total industrial employment and are critical for the ground-level consummation of the Make in India dream.

In India unorganized or informal economic activities currently account for 92% of the country’s employment and 50% of GDP. The informal sector is partly a relic of India’s legacy pre-reform license regime which tightly controlled production and restricted growth. However, the ongoing structural macro development is gradually pushing larger parts of the unorganized economy to the organized segment. IMF research shows upgrading tax systems have a big impact via productivity gains. “Moves towards a less-cash economy, indirect-tax changes, tax compliance, e-commerce, and some progress on labor law reforms, among others, will prove disruptive to traditional structures in the medium term, but will certainly be game changer translating into larger market share for the organized sector,” Citigroup anaylsts say in their recent report. Although the stage is set for more formalization, risks include near-term GST disruption and challenges for small unorganized firms from strict compliance requirements, leading too near-term demand challenges. Though, small firms continue to account for nearly a third of India’s manufacturing output, India doesn’t have massive-scale manufacturing despite cheap labor, and has a low manufacturing productivity because enterprises remain small.

World Bank has found that high growth itself leads to a gradual shrinking of the informal sector, as employment in the formal sector grows with rising demand. As per their analysis, younger workers made a key contribution to the decline in informality and exports growth, FDI and higher exposure to global markets had significant impact on the transition. With smartphones ushering in a new era of the mobile connected workforce, new business models are emerging and entering into hitherto informal/unorganized sectors of the economy. The government is consolidating over 70 labor laws into 4. Studies suggest compliance with labor laws adds up to 35% to unit labor costs for small enterprises; hence improved compliance requirements could create positive incentives for more formalization.

Higher productivity and growth: Productivity growth leads to better efficiencies in allocation of resources, leading to higher growth and scale that can have a feedback effect on productivity, setting off a virtuous cycle of growth. As more enterprises turn formal, their access to institutional capital would improve, enabling them access to lower cost capital.

Cashless economy: The government has taken calculated steps in this direction. Government has stated intentions to lower corporate income tax rate from 30% to 25% over the next 2-3years. Also, with government strengthening the tax administration as part of its efforts to improve compliance. The government has targeted to double the number of individual tax payers in the country to 100mn.

GST: GST’s implementation with its input tax credit mechanism could be disruptive in the short term as companies would not be able to avail input tax credit until the related supply chain pays their due taxes. Still, it will reduce cascading of taxes and, boost returns from economies of scale in manufacturing, and lower logistics cost. It will also lead to government tax revenues go up.

FDI Surge: In India, recent liberalizations in FDI norms have resulted in a surge in foreign capital inflows into the economy across manufacturing and services sectors. FDI inflows, particularly in the retail sector could play an important role in increasing the contribution of organized sector in the domestic economy, by bringing in new scalable business models and technologies.

E-Commerce: Smartphones are rapidly spawning an era of the mobile workforce in India and have made possible the emergence of several marketplaces in several segments like cabs, household services, food delivery, budget hotels etc.

In its report on Urban Awakening, McKinsey Global Institute (MGI) estimates India’s urban population to balloon to 590 million—nearly twice the size of the US—by 2030. MGI says India will have 68 cities with population more than 1 mn, 13 cities with more than 4 mn people and 6 megacities with populations of 10 million or more. It projects India’s work force to increase by 270 mn, 70% of that coming from urban jobs. This new labor force will also be relatively young. In order to meet the needs of this urban class, MGI estimates India will need about $1.2 trillion in capital investment; 2.5 billion square meters of roads to be paved; 700-900 mn square meters of commercial and residential space and 7,400 kms of subways and transportation to be constructed. At present, the median age of the Indian population is 25.3 years—lower than Brazil (28.6 years) and well below China (34.1 years) and Russia (38.4). While these numbers are staggering, perhaps the most important figure for commodity demand is MGI’s projections on the growth of India’s middle class. MGI estimates that India will have 91 million middle class households by 2030, that’s more than a 300% increase from the 22 million they have today. This mass of people will likely demand better housing, better roads, better goods. India would need to build a city the size of Chicago every year for the next 20 years in order to create enough commercial/residential space.

India’s leading rating agency, CRISIL says mass-scale skilling needs to be done in order to improve competitiveness of the Indian labor market. Restrictive and non-uniform labour laws across states remain a significant hurdle to creation of large scale employment. India needs an estimated Rs 43 tn in the five years for its infrastructure build-out.

Online education to be worth $1.9 bn

Digital education will transform rural lives. According to a report titled “Online Education in India: 2021”, released by Google, along with KPMG, reveals that the increased use of the internet is going to have a direct impact on the education industry and  online education is expected to grow eight times in the next four years. That remarkable growth rate will establish a stable $1.9 bn worth industry. YouTube has witnessed 4X growth in consumption of education-related content in the last one year. Online certification courses are expected to witness the highest growth, with a net value of $463 mn by 2021. Google and KPMG also noted that the primary and secondary, supplementary education will have a massive user base of 260 mn, and it is expected to reach $773 mn by 2021.

The services sector has 60% of the weightage in economy/ it will be 65%. Nasscom estimates India will have about three to four mn direct jobs by 2025 as the digital business grows to become a $1-tn economy in the coming five to seven years. His simple logic – right now the estimate of the current size of IT sector $150 bn, communication $150 bn, electronic manufacturing $100 bn, e-commerce $30-35 bn and then there are new startups, digital payments, etc. So if it’s around $400 bn already, India needs just $600 bn more. The Indian digital ecosystem is kicking because of the sheer accelerated mode of the Digital India programme, digital delivery of services, digital education, digital health, plus a renewed stress on digitisation of the government and the corporate sector.

Aviation will make 40 metros by 2025. The aviation ministry launched ‘Ude Deshka Aam Naagrik’ (UDAN) Regional Connectivity Scheme. Under the scheme, the government will provide air connectivity to unserved and underserved airports in the country. The UDAN Scheme is a key component of the National Civil Aviation Policy (NCAP). This is a first-of-its-kind scheme globally to stimulate regional connectivity through a market-based mechanism. Airfare for a 1-hour journey of approximately 500 kilometres on a fixed wing aircraft or for 30-minute journey on a helicopter would be capped at Rs 2,500. In the first phase 27 served airports, 12 underserved, and 33 unserved airports are being connected, creating about 108 routes and offer 13 lakh seats annually.

One of the most important lessons from the demonetisation drive of last year was that it is possible for a government to take hard decisions without eroding political capital. The election wins in key states of Uttar Pradesh, Uttarakhand and Goa bears this out. The political developments have two major implications for the government at the Centre: 1. Thumbs-up to reforms: A clear majority for NDA in the Upper House of Parliament can smoothen the reform process. And better Centre-state coordination can improve the ability to push hard decisions on land and labour reforms across states. It also means that gains made on the fiscal and monetary front over the past three years are unlikely to be reversed. If NDA also triumphs in the 2019 general elections, it would mean a single party majority in both the Houses of Parliament. All in all, the acceptability of reforms is much higher now as the political landscape changes.

Recent state election wins directly translate into more seats for the NDA in the Rajya Sabha in coming years.