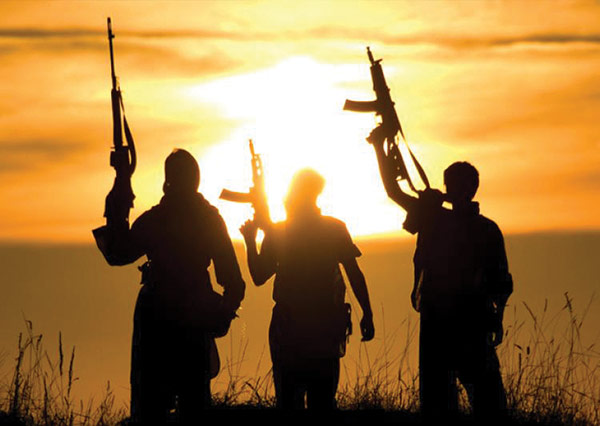 Economists as early as Adam Smith contended that the division of labor and gains from trade are limited to the size of available factors of production. Just as a single household or city is less productive if it only relies on internal resources, so too do national economies limit themselves to the extent that they wall off external producers and consumers. And this explains vividly the most dangerous aspect of global terrorism. Terrorism is an outcome of extreme nationalism, religious fundamentalism and upmanship in the arena of religious belief.

Thus in a way, the kind of nationalism that has emerged recently in USA, Britain and some other European countries or elsewhere on the globe is not a very happy sign for the future of mankind. The increasing skepticism of foreign cultures, businesses, immigrant workers and refugees is its immediate result. It was the anti-globalist and anti-trade sentiments that helped pass Brexit in UK. Such political events have uncertain economic fallout on trade. Closing down borders to trade and immigrant workers, reduce the size and diversity of economic transactions on one hand and limit productive resources on the other hand.

There have been more than 1,000 known small and big terror attacks in different parts of the world in the last one year. Investors and businesses have been dealing with the realities and tragedies of global terrorism since two decades, and the threat has only increased. Besides, human cost, the economic impact is also larger than most realize. However, there was always a kind of denial. But whether we accept this fact or not the global terrorism has a serious impact on the economy.

According to McKinsey’s latest survey on economic conditions global executives see geopolitical issues as a rising risk to growth. Beside geopolitical instability they consider terrorism the biggest threat to the global economy. And this view is surprisingly not limited to any particular region. For the long term, they say instability in the Middle East and North Africa and terrorist attacks pose outsize threats.

Across regions, executives in the Middle East and North Africa, Europe, and North America are the most likely among their peers to cite geopolitical instability as a long-term risk to global growth, as well as rising income inequality, which remains a top-five risk for the long term. Respondents in developed Asia, meanwhile, most often express concern about terrorist attacks. In the long term, too, respondents report outsize concern over geopolitical instability, specifically in the Middle East and North Africa. Terrorist attacks have become the number-two concern, with executives citing this threat more often than in any previous survey. Thirty-one percent of respondents identify terrorist attacks as a threat to global growth in the next decade; more than double the share who said so in McKinsey’s previous survey.

All kinds of markets hate uncertainty, and terrorism creates a lot of it. On a broader scale, terrorism hurts international trade. The financial markets literally shut down after 11 September, and did not really recover until months. The deadly attack in France in 2016 added to the sentiment that France may be an increasingly unstable place to live and do business in.

From an economic standpoint, terrorism has been described to have four main effects – First, the capital stock (including human) of a country is reduced; Second, the terrorist threat induces higher levels of uncertainty; Third, terrorism promotes increase in counterterrorism expenditures, drawing resources from productive sectors for use in security; Fourth, terrorism is known to affect negatively specific industries such as tourism.

The most immediate and measurable impact of terrorism is physical destruction. Terrorists destroy existing plants, transportation systems, workers and other economic resources. On smaller scales, acts of terrorism may blow up cafes, cinemas or roads. Productive resources that might have generated valuable goods and services are destroyed, while other resources are almost invariably diverted from other productive uses to bolster the military and defense. None of this creates wealth or adds to the standard of living.

Various surveys of international corporate investors provide direct evidence of the importance of terrorism on foreign investment. Corporate investors rate terrorism as one of the most important factors influencing their FDI decisions. A close analysis of the impacts of the 11th September attacks on USA provides some suggestive evidence – in the year 2000, the year before the terrorist attacks, FDI inflows represented about 15.8% of the Gross Fixed Capital Formation in the US. This figure decreased to only 1.5% in 2003, two years after the attacks. Conversely, FDI outflows from the US increased from about 7.2% of the Gross Fixed Capital Formation for the US in 2000 to 7.5% in 2003. However, not all this variation in FDI can be attributed to the effect of the attacks.

There are two obvious industries, especially vulnerable to the effects of terrorism: insurance and tourism. But not all insurance companies pay out in the event of international terrorism or foreign wars. Tourism is even more concerning. In France, for example, tourism accounts for approximately 7 to 8% of total gross domestic product (GDP).

In times of conflict, reactive governments and nervous citizens are far more inclined to give up economic and political freedoms in exchange for security. It reduces the citizens of the country to accept whatever comes their way. This could be higher taxes, higher government deficits and higher inflation. The governments get an easy way out to solve other problems facing the country by burdening people with taxes, by implementing price controls and sometimes even the nationalization of industries.

Economist and historian Robert Higgs has demonstrated in his book “Crisis and Leviathan,” that many government controls stay in place long after the crisis is over.

Terrorism is risky business for everyone.