The Lending Libraries of Madras 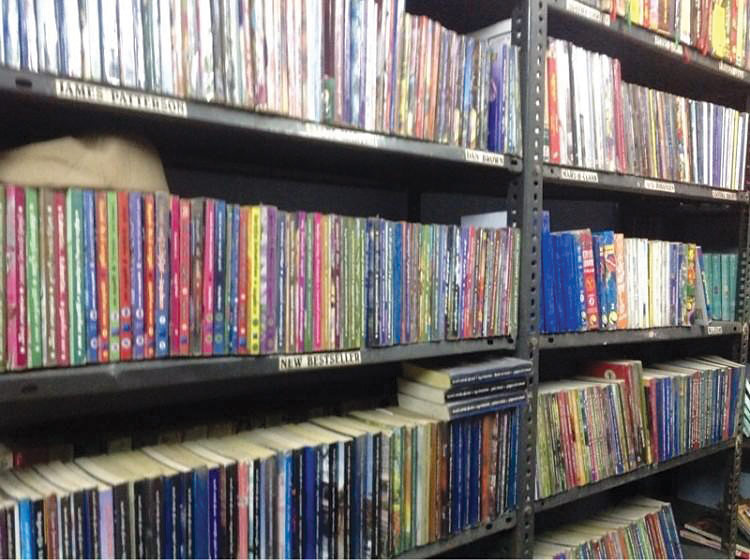 Tamil Nadu is witnessing the worst drought in 140 years and there is no daily supply of drinking water in Chennai. In many areas, piped water is being supplied only once in three days. I feel not only agitated, but also sad.

Madras (what to do, I’m still uncomfortable with Chennai and Mumbai) will always have a special place in my life. I was 17, when with a suitcase in hand, first time I walked out of the Madras Central railway station, the huge majestic building, designed with a combination of Gothic and Romanesque styles. The original railway station was designed by George Harding, later modified by Robert Fellowes Chisholm with the addition of the central clock tower. It was opened in 1873, some 144 years back. All these details I had memorized from a booklet and with the flood of information about the grand old city my mind was transported to several years back. I felt being part of its history, like a character in any Dickensian novel. Thankfully, I remained one, right from that moment for another four years, as a result of very sincere and pragmatic efforts by some very nice people, whom I met there the first time. In the process I learned so much about the happenings of the century I was born in – certainly the 20th Century was the bloodiest of all. The much greater slaughter occurred because of two absolutist, uninhibited, unrestricted ideologies and socio-political experiments – fascism and communism. It murdered people in war and democide without the inhibition of culture and religion.

Madras was the place I grew up intellectually, although I was studying engineering, a dry and bland subject. The credit goes to some private lending libraries, second hand bookstore owners and some very enthusiastic old people I met; in all of whom I literally saw an abstract image of the captivating song “No matter what the future brings/As time goes by” penned by Herman Hupfeld, from the classic film Casablanca.

The city was reeling under acute water scarcity yet MG Ramachandran (MGR) was worshipped. He was the most popular chief minister despite being very controversial. Natwar Singh in his autobiography, One Life is Not Enough alleges that MGR covertly supported and financed the LTTE and their cadres were being given military training in Tamil Nadu. And there is no reason to disbelieve Natwar Singh. Kamal Haasan was ruling the celluloid; but you could still catch Rajinikanth shooting on Mount Road for Billa, a remake of the 1978 Amitabh Bachchan starrer Hindi movie Don which in 2007 again inspired Meher Ramesh to re-remake the same with the same title Billa in Tamil.

Those days Madras was full of private lending libraries right up to Tambram, the far Southern end of the city suburb. I’ve never seen private libraries, anywhere else. Of course to my knowledge Pune had two – one behind the Deccan Gymkhana bus stop and another near Alka Talkies on Tilak Road. But those two were too modern – full of Mills & Boon and other popular literature. In Madras there were lending libraries concentrating on specific topics. These were run mostly by some very well-read retired gentlemen who were more interested to interact with nicer people rather than making money.

My knowledge of the English language was poorer than my state, Uttar Pradesh. It was interesting to see most of my classmates travelling in the same boat since northern India had been in a majority in the class just like it is in Parliament. Instructors were having a harrowing time as the medium of teaching was English and we were hardly scratching the qualifying marks in the weekly exams. Some of them were frustrated since they had full faith in our learning ability. One day our favorite instructor, Mr Y Srinivasan came up with an idea. He instructed us “to learn the English the wrong way,” and advised us to take membership of a lending library and read pulp fiction beside a very popular poorly printed 24 pager Rasvanti. It was neither a magazine nor a booklet; it was just numbered so the readers don’t end up buying the same again. Within a week everyone had a few copies of Rasvanti tucked under their pillow. It was the written version of a porn movie, that’s as far as I can go to describe its content. Keenly watching our progress Mr Srinivasan was very happy.

Forget about the madness Tamilians have with their favorite film stars, those days Madras had a population of very well read people. Reading books were one of the prime sources of not only information but entertainment. We used to swarm lending libraries to get our hands on our favorite authors’ latest and pick up a film magazine. With the advent of smart gadgets and the digital revolution there is internet, e-books, and television, but it’s heartening to know that the Easwari Lending Library, which was established in 1955 at Llyod’s road is still going strong spreading across the city with ten branches and still expanding.

Not to forget, the Connemara Public library at Egmore near Government Museum. It had the latest books in Hindi which I could never find even in the Kanpur Public library, a place in the Hindi heartland. It means the librarians knew which book to order and which one to avoid. Compare that to a public library in Mumbai at Charni Road, which is draining the exchequer in crore each year in the name of who else, but Gandhi and has a huge collection of Hindi books. But there are hardly many readable books. It’s full of published thesis, written by the language doctors who are systematically destroying our universities.

Thus began my l’affaire with private lending libraries. I became a member of three and out of that; one had books only on the Two World Wars, run by a gentleman and his German wife. As it happens with me we hit it off in our very first meeting. “You had your supper?” It was the first question he used to throw at me whenever I went to that small cozy place. The couple hated Adolf Hitler, but was pained to see the way he was maligned in books written by American and British writers.

I tried to understand their logic, which was very simple – I must first know the man. He asked me to first read Hitler’s Interpreter. It was an account written by Hitler’s interpreter Walter C Langer; I read The Young Hitler I knew by August Kubizek, who was Hitler’s ‘personal and exclusive’ friend – a striking account of the four years of their close companionship; and the most wonderful book written by Nerin E. Gun –Eva Braun: Hitler’s Mistress. I did not want to return this book and the lady, always very sweet and caring lost her cool when I lied to her that I had lost it. It’s still with me. Born in Rome, Nerin, for his reports about the Warsaw ghetto and predictions of the defeat of the German armies in Russia, was arrested by the Nazis – one of two foreign correspondents to have been put into a concentration camp solely because of journalistic activities. Later he settled in the US and when he wrote his book Red Roses from Texas, the first book on the assassination of President Kennedy, no American publisher touched it. It was published in London. His other book is The Day of the Americans, Fleet Publishing Corp., New York, 1966.

Madras also had some very interesting second hand bookshops where one could discuss a book with the bookseller. I often went to Egmore to visit one – again a nice gentleman who once belonged to a wealthy family. His parents were staunch Gandhi followers and as it had happened to many “REAL freedom fighters,” the family lost everything. His small roadside place was patronized by some well-known people who gave their collections to him for free. Once he took me to a place where I saw a poster of Hathi Mere Sathi, the hit Rajesh Khanna movie on the wall. I realized I was in the office of the famous MMA  Chinnappa Thevar, who had died a year back.

I still find Madras an interesting place, although it’s not the Madras I used to roam around on a bicycle. At least Madras even after being rechristened as Chennai has retained its charm unlike Kolkata which I find almost a dead city and Mumbai, which is dying slowly under the impact of a stupid political ideology  and crumbling infrastructure. Out of the four top metros, Delhi is smarter like its leaders. But Delhi was always free of any such dogmas since it never had its own distinctive culture and any undocumented virasat. It was always an occupied city – occupied by the most powerful of the day. It still is the same – occupied by the powerful immigrants from Lahore and beyond. Not to forget the compulsively corrupt ex-bureaucrats and diplomats.

Coming back to the water crisis, way back in 1979-1982, water supply was every alternate days with varying times; in my locality it was, hold your breath, at 2AM. The crisis, if properly handled, is not very difficult to solve. The ground water in Chennai and its surrounding areas is replenished by five lakes, all located within a 60-km radius of the city. Remember, in 2015, the lakes had overflowed due to unseasonal rains, causing devastating floods in Chennai.