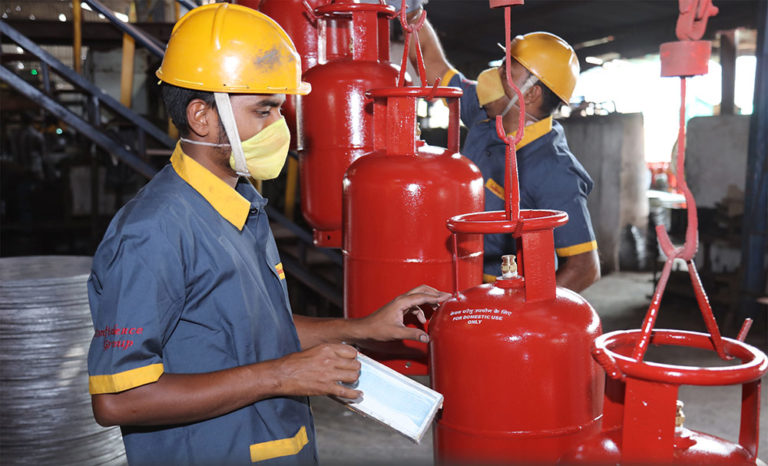 Moving on the wheels of Confidence

Asia’s largest LPG cylinder manufacturer, operating 16 units with a capacity of 72 lakh cylinders per annum and one high-tech plant for high-pressure industrial cylinders in Vizag, Confidence Petroleum India Ltd. is the market leader with 20% share. This largest private sector LPG Bottler offers services to all OMCs and operates 60 LPG bottling and four blending plants. The company claims to enjoy 95% market share in this space. Counted amongst top 5 Auto LPG Dispensing Stations (ALDS) network under the brand ‘Go Gas’ it is a 100% subsidiary of Confidence Go Gas Ltd., and runs 110 ALDS of its own in prime locations, across 21 states having an ambitious plan to add 50 more ALDS this fiscal and to scale up to 250 ALDS in future. Its packed LPG cylinder retailing is also run under the brand “Go Gas”, with 20 lakh connections – now present in 12 states and steadily venturing into new markets. Moving fast on the wheels of confidence, the company has invested `950 crore on different verticals; and now has plan to invest `600 crore on future expansions. It will set up 30 additional LPG bottling plants and 150 auto LPG stations (ALDS). The schedule is to complete the entire expansion exercise by December 2018. Confidence group employs 4,400 people and with expansions, another 2,000 headcounts would be added. The company has tied up with IOC-Petronas for long-term supply of LPG and with SAIL for its steel requirements.

In 2004, the company was taken over by a Nagpur based Khara group who rejuvenated it with a flurry of investments, mergers, JVs, acquisitions and takeovers. The company is now sitting upon many great assets, brands, retail distribution networks and valuable real-estate. The company also holds freehold land which could be very valuable. A first generation entrepreneur, who started life with a small utensil shop in Nagpur, Nitin Punamchand Khara’s role model is business tycoon Dhirubhai Ambani. An incident, when he stood for two whole days in front of an LPG distributor for getting a new connection in his boyhood, inspired him to spot a huge opportunity and to venture into LPG business. Khara group has a past track record of taking over sick units and turning them around. The group had taken over many sick cylinder manufacturing units in AP and Maharashtra and managed to successfully turn them around.

But the good vibes ends here as the declared numbers are not so dependable. For example: ALDS (Auto LPG Dispensing Stations) division, which is run under a 100% subsidiary Confidence Go Gas Limited, with sizable investments. In FY17, it had a sale of only `0.5 crore (`0.25 crore in FY16) and net loss of `0.15 crore (`0.29 crore in FY16). This division now runs about 110 ALDS on its own in prime locations. The company is very vocal about the strength of the brand, how they brought down the break-even of a new station to just 12 months from 24-30 months and their huge ambitions to scale- up to 500 stations and high average sales per station of 230 tonnes per annum. Another much lauded Indonesian subsidiary PT Surya Go Gas Indonesia – the declared numbers in FY17 was: Sales `2.4 crore and net profit `0.40 crore.

During FY17, the company incurred a forex expenditure of `23 crore (`27 crore FY16) for purchase and import of LPG. Forex earnings are not so meaningful around `0.7 crore (`1 crore in FY16) from return on investments received from Indonesian subsidiary PT Surya Go Gas. Where are the revenues from the much lauded international operations? Annual Report 2016 & 2017 hides more than it reveals. In FY17 there was no consolidated balance sheet made available. The company website doesn’t bother to have an Investors section at all.

It’s a conglomerate with presence across the entire LPG value chain – with complex holding structure. Operates with 10 subsidiaries and 10 associates and, despite the negligible reported numbers for them, would warrant a holding company discount. Strong balance sheet with marginal debt. Despite topline fluctuations, the company is profitable consistently.

But is it still a value buy?

The huge mismatch between the declared numbers and the size, scale, assets and operations raises a lot of questions. But the prevalent way of doing business was also to be blamed. The historic steps taken by the government have forced India Inc to wake up to the potential of market-cap driven wealth creation. Analysts are quite perplexed when the MD Nitin Khara declared in a recent interview that Confidence Group had registered a turnover of `1240 crore in (FY1) and is confident to chase the turnover of `1500 crore in FY18. The listed company is the flag-ship of the group; no other large meaningful company within the group. And the declared revenue for Confidence Petro was `499 crore in FY17. Then what did he mean? Perhaps a clue about the things to come!

LPG distribution is a brand driven consumer business and generates good operating cash-flows. The recent promoter’s stake hike from 46% to 57% is a huge green signal. Few days back, the company and its subsidiaries have bagged a huge order worth `362 crore from BPCL, HPCL, and IOC. This kind of order is unprecedented and a first for the company. As a result, both top line and bottom line could be surging over next 2-3 years.

The government, in its drive to minimise the subsidy, has ordered OMCs to raise subsidised LPG price by `4 per cylinder. This is a boost to the private LPG distribution sector. With the government already refusing LPG subsidy to consumers earning more than `10 lakh per annum, a ready- made market is now available to private LPG marketing companies. The illegal sales of cylinders have shown a downfall. Direct Benefits Transfer for LPG has also encouraged the end of illegal sales of cylinders. As crude prices are at a historic low, the demand for oil, gas and petroleum products has increased substantially and this has benefitted the sector. With the economy expected to grow double digit in the long-term, the energy sector would benefit from the same, going forward. Additionally, replacement demand for LPG cylinders is rising.

To cater to the demand, the government envisages an investment of `25000-30000 crore in LPG infrastructure, including import terminals, pipelines and bottling plants. Fuel retailers are planning to add another 4500 LPG distributors this fiscal. These state-owned OMCs will also add 47 new LPG bottling plants over the next two years, expanding their total capacity by nearly 25% to 21 million tonnes in 2018-19. State firms sold nearly 20.7 million tonne in 2016-17, with 100% capacity utilization and also with help from private players. But with the projected total demand of 24 million tonne in 2018-19, the state firms alone can’t cope up with the demand, but need to be supported by rabid private bottling capacity expansion.

The LPG penetration in the country is only 72%. The government aims to take this to 95% households across the country in the next three years, entailing an investment of `30000 crore. There were about 24.7 crore households in the country. The oil ministry’s projection is to provide LPG connections to 26.87 crore customers by April 2019. Government’s ambitious plans are set to throw open big opportunities for private LPG bottlers and distributors.

In order to replicate the benefits which CNG has given to the transportation segment, cleaner gas fuels are now being promoted for industrial use. Government’s policy initiatives have been speeding up conversion of major industries from coal/other fossil fuels to CNG and LPG. Delhi has already announced the ban on industrial use of high sulphur fuels and is promoting a switch to cleaner fuels like LNG/LPG. The government has announced plans to build green corridors and ensure CNG stations on highways along Delhi and Mumbai. These demand-side boosts from the industrial segment provide significant tailwinds for gas retail companies.

Earlier LPG attracted a zero or nil excise duty. VAT or sales tax was also nil in most states. However, under the GST, a 5% rate was levied on subsidized LPG and 18% for non-subsidized LPG. This essentially means that the LPG prices are likely to go up and impacting demand, could also be biting into sales for private players. However, things will return to normal over time.

In every segment they operate, they are being quoted as ‘The Largest’..! To confirm its validity if we do a random comparison (despite operating in different fields) to get a perspective on valuations: If the largest Pepsi bottler Varun Beverges (sales- `3850 cr/profit- `50 cr) can command $1.5bn valuation, why would the largest private domestic LPG bottler serving top OMCs with 95% market share for outsourced volume, 20% market-share for cylinders and with large international operation, reporting so trivial numbers and be available at `400 crore market-cap?

After a flurry of up circuits, the stock is now resting at the BSE yearly circuit at `19 for about two months. That will be relaxed on 1st of October. Looking at historical charts, travelling through wild swings of continuous up and down circuits (mostly in the range of `5-25) is not new to this stock; nearly over two decades, the stock has had so many of them.

The big question is – will it be different this time?