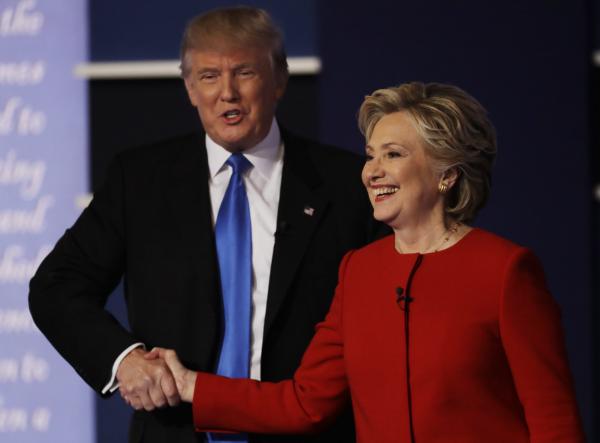 Sending shockwaves around the world the American voters decided to hand Donald Trump the nuclear launch codes and world leadership. The 70-year-old real-estate mogul, reality TV star who lives in a penthouse apartment on Fifth Avenue, never before held public office and is the oldest person ever elected to a first presidential term. So in political terminology an outsider captured power. Now Republicans control Senate, House, majority of Governors and Presidency. This hasn’t happened since 1928. In more than 10 months he successfully vanquished 16 other Republican candidates and won the party’s nomination and he picked up states, many pundits deemed out of his reach. Thus he had become the first major party nominee without any government experience since General Dwight Eisenhower in the 1950s. This was not a typical election and Donald Trump is not a typical president-elect. Republican president-elect Donald Trump delivers his acceptance speech during his election night event at the New York Hilton Midtown in the early morning hours of November 9, 2016 in New York City

On the other hand, his critics are lamenting that he lacks an understanding of the fine points of domestic and foreign policy. Secondly, they feel Trump does not have a cool temperament necessary to guide America, which is facing troubles at various fronts. Even a large number of his own party members found him repulsive. Some called him a grotesque fraud and a spectacular liar. In recent history the same kind of fear was anticipated when Ronald Reagan, a failed movie actor was elected president. However, it should not be forgotten that history remembers the man as someone who changed the very economic fabric of America.

The 2016 presidential election was indeed unique in a number of ways. The media were so sure that Newsweek had to withdraw 1,25,000 copies with a cover story “Madam President – Hillary Clinton’s historic journey to the White House” from the market. No doubt, Donald Trump was far behind Hillary Clinton in getting popular votes. The last person to win the popular vote, but not the presidency was Al Gore in the 2000 election.

It was the culmination of an explosive and polarizing campaign. It seems Americans were fed up with establishment politics, but they were far more fed up with the paid media and a news media that was not considering that an American voter too has a common sense, understands what is good for America. But all that is yet not over. During the campaign, Trump had called journalists ‘lightweights’ and ‘liars,’ and prophesied the near demise of the Washington Post, the Times; called The New York Times the ‘failing New York Times.’ After his win at a gathering in Trump Tower, where he had invited the reporters, and news anchors Trump kept saying, ‘We’re in a room of liars, the deceitful, dishonest media who got it all wrong.’ However, Donald Trump has given some hope to his detractors. In his first address he pledged, “I will be president for all Americans. Now it’s time for America to bind the wounds of division. To all Republicans and Democrats and independents across this nation, I say it is time for us to come together as one united people.”

When Trump called Mexican immigrants “rapists” in his June 2015 campaign kickoff, he created a storm around the world as it was on the lines of George W Bush, a President half of the world doesn’t like to even remember in his own lifetime. However, Bush was far more refined and showed his intentions with his actions not with rhetorics. Trump regularly made comments that would have doomed a more conventional candidate. Like he would draw accusations of racism for questioning the impartiality of a judge – born in the United States to Mexican immigrants. Another target was the family of a Muslim US Army captain. And not to forget every week one or other beauties coming out of the closets with their accusations of groping and other charges which media just lapped up.

The Trump candidacy was full of contradictions. On one side, he vowed to bring back jobs and on the other hand, his clothing line and campaign hats were manufactured in foreign countries. He was once a registered Democrat, and donated heavily to both parties calling his politics as ‘the transactional reality’ of a businessman. Throughout his campaign Trump described a dark America that had been knocked to its knees by Mexico, China, Russia and Islamic State. He repeatedly announced that the American dream was dead, he alone could revive it. Trump said he would make America great again through ‘the force of his personality, negotiating skill and business acumen’ although he offered vague plans – many raised eyebrows like ‘to build a wall on the southern US border to keep out undocumented immigrants and to make Mexico pay for it.’ However dangerous it may prove to be but the truth is Trump’s win has all the elements of the idea of “make America white again”. He knew that his hateful anti-Muslim, anti-Jewish, anti-immigrant, and anti-black statements will find takers in largely overlooked blue-collar white and working-class voters. He knew he was talking to people who weren’t being spoken to.

Although Trump was born with a silver spoon in his mouth, he eventually went into business with his killer instinct. With self-promotion he became one of the  biggest developers and an ultimate success story, with the goal of having the greatest, the hugest and the classiest. He wrote bestselling books like “The Art of the Deal”, “The Art of the Comeback”, “The Way to the Top” etc. In his book “The America We Deserve” Trump wrote about his concern with several issues like out of control national debt as well as the threat of terrorist attacks even before the attack on 9/11. So Trump followed Bernie Sanders who said that “Democracy is not a spectator sport. Don’t look around and say, ‘Why isn’t he doing it, why isn’t she doing it?’ Get involved yourself.”

Did so many Americans go mad? No, they were as sane as those sitting on the opposite side of the fence. In fact, Donald Trump’s path to the White House was paved with the widespread discontentment of the working-class who felt it had reaped none of the benefits of globalization. Trump’s victory is an indictment of how out of touch the American elite is with the rest of the country.

When the Carrier’s decision to move the factory to Mexico and in turn eliminate 1,400 jobs by 2019 came out Donald took it up and cited Carrier again and again as a part of his argument. His confidence level was visible when he openly predicted at rallies that Carrier would call him up as president and say, “Sir, we’ve decided to stay in the United States.” Trump’s tough talk about Carrier, his concern about creating jobs and the economy appealed to the middle class and blue-collar workers across the industrial heartland. They soon made up their mind – they just wanted a nonpolitician in the White House and they clinched the White House for Donald Trump. These are the people who wanted radical change in America – a fact which many election watchers and analysts had underestimated.

But a businessman Trump had managed to tap into this deep-seated feeling. He acknowledged their contribution with “The forgotten men and women of our country will be forgotten no longer and that it was not a campaign, but a movement that had won him the White House.”

Those who have read some of his books will give testimony to the fact that Donald Trump was certainly not a fool as he had been trying to act. Anyway, for any politician the campaign rhetoric doesn’t necessarily translate into policy. Being a businessman he knows how to get things done with showmanship, self promotion, and how to get free publicity with outrageous comments. It is evident how with his first speech after being declared a winner Donald has given the hint that now given a chance President Trump will be a very different person than candidate Trump – a sober, thoughtful and a rational president.

Whereas the global markets are concerned, the pain is not over. After Brexit and US election, now the third major event is upcoming Italian referendum this month that may again create volatility. At present, any Italian law needs to be approved by both the Chamber of Deputies and the Senate, often resulting in delays (same like Indian Rajya Sabha) in effecting reforms. However, on December 4, the Italian public will get to decide whether they want to stick with the old or restructure the legislative process by reducing the second chamber’s power. Italian referendum means a lot for the future of Europe’s political stability.

HL Mencken, wrote on 26th July 1920 in ‘The Baltimore Evening Sun’: “As democracy is perfected, the office of the President represents, more and more closely, the inner soul of the people, on some great and glorious day, the plain folks of the land will reach their heart’s desire at last, and the White House will be occupied by a downright fool and a complete narcissistic moron.” Hope this prophecy never comes true.

Now, whether a majority of angry U.S. voters have elected a con man to the presidency or they were far out smarter than the TV studio and newsroom hawks, only time will tell. But let us wish the best of luck for the America’s 45th president and the American people since America is on move and entering a new era.