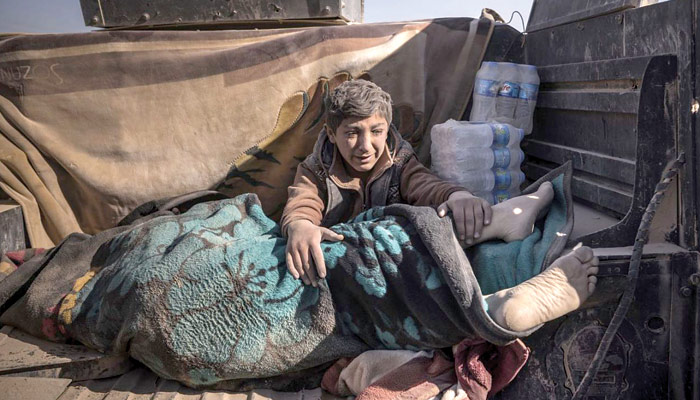 In this age of information technology when we proudly proclaim we all live in a global village and when our esteemed columnist Willian Johnson Dean writes “I remain amazed how quickly we can communicate with each other despite the vast distances between our respective cities” the world, in fact for all the geographical purposes, has so many closed borders. The doors for refugees and asylum seekers are closed everywhere.

On one side, there has been a multiplication of crises in Mali, Congo, Sudan and Syria along with the Afghanistan and Somalia that never seem to die. As its consequence, more and more people are being displaced. Syria is the biggest cause of worry, because of the extremely fragile situation prevailing in the country. More than 500,000 Syrian refugees in neighbouring countries have registered with the UNHCR not to mention the many others who have left the country and have other resources or support.

Politically, big or small and financially strong or weak – refugees have no takers. Bangladesh is pushing ahead with a controversial plan to relocate tens of thousands of Rohingya refugees from Myanmar to a remote island Thengar Char in the Bay of Bengal despite warnings it is uninhabitable and prone to flooding. India, which lags on most parameters has an edge in this regard. United Nations High Commissioner for Refugees Antonio Guterres said “India with its history, culture, traditions, is today an example of generosity in the way it has opened its borders to all people who have come looking for safety and sanctuary. There are Tibetans, Afghans, Myanmarese and it has maintained an open door policy for all. We consider India a more reliable partner in the world to guarantee that people who need help will find a place. Its example, should be followed by the international community.”

In this situation the president of the most powerful nation Donald Trump not only barred citizens of seven Muslim-majority countries from entering the United States for at least the next 90 days, he also suspended the US refugee programme for 120 days, specifically banning Syrian refugees until further notice, reduced the number of refugees who would be admitted this year to 50,000 and specified that refugees who were from a religious minority and fleeing religious persecution should be prioritised. A federal judge has blocked part of the executive order.

But those who are criticizing Donald Trump’s ‘Muslim ban’ should also know that it is not the first time specific groups or nationalities have been blocked from the US. Over the past 200 years, successive American presidents have placed restrictions on the immigration of certain groups. I’ll discuss some of occasions here.

Way back on May 6, 1882, President Chester A. Arthur signed the Chinese Exclusion Act, which banned skilled and unskilled labourers and Chinese employed in mining from entering the US for 10 years. It came at a time when the US was struggling with high unemployment and, Chinese were scapegoated for its economic woes. It was very strict law as it placed restrictions on Chinese who were already in the US, forcing them to obtain certificates in order to re-enter if they left the country and banning them from securing citizenship. The act expired in 1892 but was extended for a further 10 years in the form of another – the Geary Act. This placed additional restrictions on Chinese residents, forcing them to register, without which they could be deported.

President Theodore Roosevelt, on March 3, 1903, signed the Anarchist Exclusion Act or the Immigration Act of 1903 marking the first time individuals for their political beliefs. It so happened that in 1901, President William McKinley had been fatally shot by an American anarchist who was the son of Polish immigrants. The act added three other new classes of people who would be banned from entry: those with epilepsy, beggars and importers of prostitutes.

Then, during the World War II, President Franklin D. Roosevelt drawing on fears that Nazi spies could be hiding among refugees, limited the number of German Jews who could be admitted to 26,000 annually, but less than 25 percent of that quota was actually filled. History remembers US administration when it turned away the St Louis ocean liner, carrying 937 Jew passengers, in June 1939. The ship was forced to return to Europe, where most of them were killed in the Holocaust.

Then came the Subversive Activities Control Act of 1950 or the McCarran Act. It made possible to deport any immigrants believed to be members of the Communist Party. President Harry Truman opposed the law, stating that it would make a mockery of Bill of Rights, still parts of the act stand, although some sections of the act were ruled unconstitutional by the Supreme Court in 1993.

In 1964, the US tried to institutionally get rid of migrants and discontinued its Bracero programme, which allowed almost a quarter million Mexican workers to be employed seasonally on US farms. Then, following the 1979 Iranian hostage crisis, during which the US embassy in Tehran was stormed and 52 Americans were held hostage for 444 days, American President Jimmy Carter on April 7, 1980 banned Iranians from entering the country.

In the recent history, in 1987, the US banned HIV positive persons from arriving in the US. The laws were influenced by homophobic and xenophobic sentiment towards Africans and minorities at the time, which President Barack Obama lifted in 2009.

Several researchers have concluded that in fact migration helps increase world income and benefits the host country’s economy. Klein and Ventura (2007) suggest that migration of unskilled workers increases world output more than that of highly skilled workers. George Borjas examined immigration to the US from 1960 to 1990 and concluded that a 10% increase in migrants leads to a 3-4% decline in native workers’ wages and a 2-3% fall in weeks employed. Studies also find no effect of immigration on inequality because immigrants are represented in the low-skilled category. Keeping all kinds of fear aside, refugees must be given shelter on humanitarian basis. Here I would like to share a letter which is written by a Syrian refugee Abdulazez Dukhan –

Dear Donald,
I am 18 years old. I am one of the four million people who have fled Syria. We left behind our hearts and the people that we lost – both buried somewhere along the road. I am sending you this message to congratulate you on the presidency. But also to remind you how much your words matter in deciding our future. We started the revolution holding roses and hoping for support from the international community. Years passed; the roses turned into guns, but the hope for support continues. Still, neither roses nor hope helped. Could your predecessor have done anything to change our fate? I don’t know. But we will continue to have faith. Your words matter to us. You might be able to change our future. I left Syria with my family four years after the revolution started. Nobody wanted to leave. But what can we do against the tanks? What can we do when death is falling from the sky? Like many others, we went to Turkey and from there to Greece. We travelled, looking back at our cities, streets and houses being destroyed. We are weak. We wanted the international community’s support and we know that it will come. Faith is what moved us and faith is what is keeping us going. Now I am a refugee. The hardest thing about living in a refugee camp is the isolation. People build walls around us and countries build walls around those walls.

Dear president, borders kill dreams. I’ve seen dreams die before their body – it leaves that person with no soul. For those of us who still have faith, please don’t build walls in front of us. Maybe today is my last day as a refugee and tomorrow I will be safe somewhere in the world. Maybe I will go back to my beloved Syria and start rebuilding. Maybe I can still dream for one more day.

Dear president, we hope that someone can hear our words. We hope that you do.

Another optimist Mohammad Kaddour who lost his leg in the war, says: “Hope is all I have for myself and for a better Syria. I may have lost my leg after receiving 13 bullets, but not hope.”

The reason that 62 million Americans were prepared to entrust the presidency to a billionaire best known for playing a businessman on television is because they’ve been absorbing the tenets of the man who has achieved so much in life with his sheer passion and authored some of the most encouraging and engaging books.

Yes, despite all the negativity attributed to the world’s powerful man the US president Donald Trump, I, like Abdulazaz Dukhan and Mohammad Kaddour, have faith in him and hope he will not disappoint particularly all three of us and in turn the entire world. But it is equally important that the governments of the country of origin create conditions for people to feel comfortable about considering the possibility of returning.