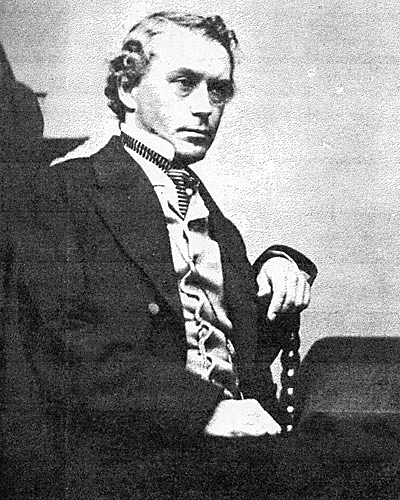 George Templeton Strong (1820-1875), a lawyer and civic leader, began his diary in 1835 at age 15 when a sophomore at Columbia College. He wrote his final entry at age 55, less than a month before his death. In his diary he writes of Wall Street panics and great fires. Of riots and cholera outbreaks. Of the creation from a wasteland of Central Park. Of the city’s northward expansion and fast-growing population, as it evolved from provincial seaport to cosmopolitan center. The diary is four million words in length. It is a neglected historical and literary masterpiece known to few New Yorkers.

The daily challenges facing 19th century New Yorkers will sound familiar to present-day residents of New York and Mumbai. A problem in getting to work today? Read on: “Streets much blocked and circulation impeded. All along Broadway the line of omnibus labors, and the carts move slow. Had my fingers mashed in an omnibus door as I was leaving the vehicle this morning.” (Of greater concern to me than mashed fingers is being thrown to the floor when the bus lurches to avoid hitting another vehicle.)
Dirty streets: “March wind raw and dirt-laden. The sands raised by the winds of Sahara are cleaner than our street dust.” (Conditions are better now, but we are still a dirt-laden city.)

Blocked sidewalks: “Half the city is being pulled down… [E]xecrations of pedestrians whom its ruins and rubbish drive off the sidewalk.”
Heat: “Four p.m. Screaming hot — thermometer at 95 degrees — the hardest day yet.”
Snow: “Saturday’s snowstorm was the severest for many years past. The streets are like Jordan, ‘hard roads to travel.’ One has to walk warily over the slippery sidewalks and to plunge madly over crossings ankle-deep in snow…” (Mumbai, I assume, has ankle-deep water, but from monsoon rains.)

Crime: “Most of my friends are investing in revolvers and carry them about at night, and if I expected to have to do a great deal of late street-walking off Broadway, I think I should make like provision; though it’s a very bad practice carrying concealed weapons.” (Crime rates have dropped dramatically in New York. Murders, for example: 2,245 in 1990, under 300 in 2017.)

Fire: Strong used to race after fire engines on foot, sometimes for more than a mile, returning to his house on Gramercy Park heavily perspiring. Our high energy diarist wanted to see everything relating to his city. (New York City today is a place of loud sirens: Fire, police and ambulances. With their trucks equipped with sirens and blaring horns, I suspect firemen arrive at fire scenes in a state of acoustic shock. I dodge into stores to avoid the ear-splitting sounds.)

Poverty was no stranger to New York in the 19th century, nor is it today. Strong asks himself how Englishmen of means and talent can fail to help the poor of their cities where “[M]en and women and children in multiplying thousands lie rotting alive, body and soul at once, in those awful catacombs of disease and crime…” He is honest enough with himself to write: “And the same question is to be asked, and must be answered, here in New York…

[W]e have our Five Points, our emigrant quarters, our swarms of seamstresses to whom their utmost toil in monotonous daily drudgery gives only bare subsistence, a life barren of hope and of enjoyment; our hordes of dock thieves, and children who live in the streets and by them.”

As a lawyer, Strong is engulfed by work. “I’ve got to bestir myself or be swallowed up in a kind of snowbank of mortgages, subpoenas, depositions and polyonymous botherations that are drifting in and banking up faster and faster.” As the years pass,he writes, “I’m beginning to feel a desire to make money…” He needs to do so. “I feel like running away from Dr. Peters and the rest of my creditors. ‘With how sad steps,
O Moon, thou climbest the skies, How silently, and how wan a face!’ And on how many hard-up people art thou looking dolefully down, within the city and county of New York alone! That is a consolatory thought. Mine is not an exceptional case. Man is born to bills and to atrophied balances in banks, as the sparks fly upward.”

He entertains dark thoughts about the inventor of taxes: “My black malison on the man who invented taxes. I trust his bank account was always short and that he died in an ill ventilated and unsanitary county poor-house, surrounded by a circle of impatient rats.”
Despite problems, Strong revels in the excitement and pleasures of city life.

Here the Prince of Wales arrives at a reception: “In came the royal party at last…We were presented to His Royal Highness seriatim. I had supposed that shaking hands with a Prince of Wales was indecorous, and that a bow was the proper acknowledgment to so august a personage, but when the Prince put out his hand, or extends and proffers his fingers like anybody else, it seems ungracious to decline the honor and say, ‘Sir,
I am so well bred as to know my place, and I am unworthy to shake hands with a descendant of James

I and George III and a probable King of England thereafter.’ I think of having my right hand glove framed and glazed, with an appropriate inscription.”
He enjoys listening to music at Castle Garden at the foot of the Battery. “Everybody goes,and nob and snob, Fifth Avenue and Chatham Street, sit side by side fraternally on the hard benches… Ample room; cool sea breeze on the balcony, where one can sit and smoke and listen and look out on the bay studded with the lights of anchored vessels, and white sails gleaming…”

When thinking of the city’s inequalities, Strong asks himself: “And what am I doing, I wonder?” He continues: “I’m neither scholar nor philanthropist nor clergyman, nor in any capacity a guide or ruler of the people, to be sure — there is that shadow of an apology for my sitting still. But if Heaven will permit and enable me, I’ll do something in the matter before I die — to have helped one dirty vagabond child out of such a pestilential sink would be a thing one would not regret when one came to march out of this world…”
Strong did far more with his life to assist others than this passage would suggest. During the Civil War, he served as treasurer of the U.S. Sanitary Commission, where he and his colleagues, working as volunteers, performed immensely important services to bring about improvements in the medical care being provided to soldiers in the Union Army.

On April 9, 1865, a joyful city celebrated the end of the Civil War. A huge crowd filled Wall Street.”They sang… ‘The Star-Spangled Banner,’ repeating the last two lines of Key’s song over and over [the land of the free / And the home of the brave] with a unanimous wave of hats at the end of each repetition. I think I shall never lose the impression made by this rude, many-voiced chorale.”

The celebration proved short-lived. Five days later, on Good Friday, President Lincoln lay dying. The jubilant banners came down, replaced by weepers of black muslin.
“The silent city from its homes and towers / With universal tears flings out its signs / Of woe.” (Whitman)

From the window of a Fifth Avenue mansion, young Theodore Roosevelt, a future president of the United States, sees the carriage pass by bearing the body of Lincoln, who himself had been in his teens when Jefferson and Adams died. How brief the history of my country. At this moment and place, the nation’s past and future are present.
In his final diary entry on June 25, 1875. Strong describes himself “as weak as a sea anemone at low water.” Less than a month later, he died in the 55th year of his life, only a few months short of the 40th year of his diary.


Strong’s diary is a treasure of The New-York Historical Society. As a labor of love, Columbia University professors Allan Nevins and Milton Halsey Thomas prepared an edited version of the diary published in 1952 by the Macmillan Company in four volumes under the title, “The Diary of George Templeton Strong.” I have had the honor and pleasure of examining the diary, bound in four morocco leather volumes, at the Historical Society.
 Author can be reached at [email protected]