Success is the child of audacity 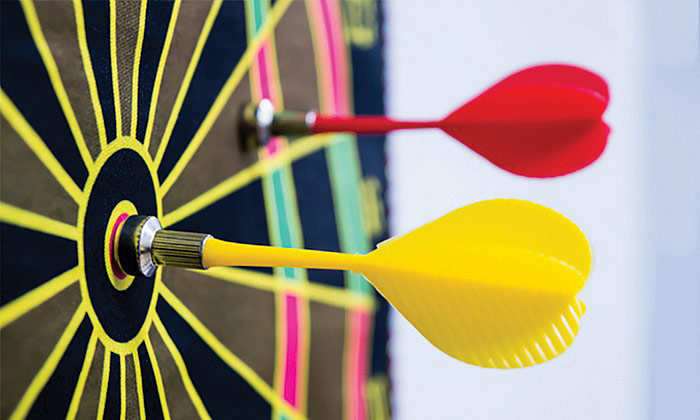 Sometime in the 4th Century B.C. a master was teaching his disciple the art of playing marbles. The game needed just two little balls made of glass or iron. One was thrown on the ground and from a short distance the player was expected to hit that ball with the other one kept in his hand. It was not easy. It demanded lot of concentration. The target was at sight. But the ball in the hand should not miss its chosen target. The master was lecturing to his disciple on the art of concentration and the result thereof.

While both the master and the disciple were at work, their concentration got distracted by the booming sound of horns and the thrumming of drums. They saw the common people running towards the direction that made the hullabaloo. The disciple who was only a four year old boy looked inquiringly at his master.

“Let us go ahead with our work. That is your father coming back from war with his booty. He has conquered one more kingdom. Now concentrate on your target,” said the master.
The boy concentrated on his target. He got ready to shoot at the dormant ball. In a fit of fury he said, “What kingdom will be left for me to conquer if my father goes on adding kingdom after kingdom to his vast empire!” And he let the ball in his hand go with such a great force that the target broke into smithereens.

When the boy grew up and succeeded his father, he began the conquest of the Persian Empire. He then gained control of most of Asia Minor and pushed on into Bactria and India, reaching Punjab. Till he died he added more kingdoms to his Empire. He brought the world under his control.

The boy was Alexander, the Great. His father was Philip II of Macedon. And his master was the great Philosopher Aristotle. Emperor Alexander was the true Empire builder.
What does this anecdote in the life of a valiant emperor tell us? It is quite simple: “The man who succeeds above his fellows is the one who, early in life, clearly discerns his object, and towards that object habitually directs his powers.” That is the right definition of success. That is the true definition of an achiever. He who has one aim, one desire and one goal is bound to achieve.

No man is born as a genius. “Even genius itself is but fine observation strengthened by fixity of purpose. Every man who observes vigilantly and resolves steadfastly grows unconsciously into genius,” remarked Lord Lytton.

The secret of success is HARD WORK. And to do hard work all you need in this life is ignorance and confidence. The success is sure. Ignorance is knowing yourself. Confidence paves way to promote yourself. Then can success be far away?

Behind every successful man there is a woman, they say. The word woman need not be taken in the dictionary meaning of it. Here it only means an inspirer. Inspiration springs more readily from knowledge than from ignorance. As the Latin poet Ovid puts it, “There is a deity within us who breathes that divine fire by which we are animated”. That deity has to be explored through our inner voyage and worshipped. That deity is bound to bless us the boon we aspire for.

What use can this life be if it has no aim? No failure, but low aim, is crime. Once we decide upon a purpose in life, we have to throw headlong into our work such strength of mind and muscle as the Almighty has given us. Let us use the following words of the eminent essayist, Joseph Addison, as a mantra in our everyday life: “If you wish success in life, make perseverance your bosom friend, experience your wise counsellor, caution your elder brother, and hope your guardian genius.” Never forget that Success approaches those who are very busy.