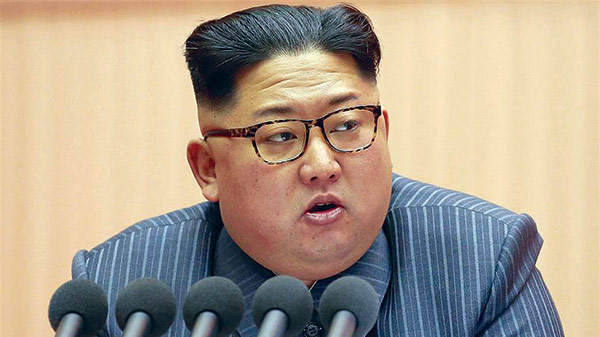 It was September 19, 2017 when US President Donald Trump thundered at the United Nations: “The United States has great strength and patience, but if it is forced to defend itself or its allies, we will have no choice but to totally destroy North Korea. Rocket Man is on a suicide mission for himself and for his regime. He was referring his favored nickname for North Korean leader Kim Jong Un. It seemed like war between the United States and North Korea was a real possibility. Kim spent much of 2017 threatening the US and its allies and tested three missiles that can hit even Washington, DC. He also tested the largest bomb, one that was seven times stronger than the bomb America dropped on Hiroshima.But now the scene is changed.

Suddenly, in the last week of March this year a flash came on TV screens around the world that after 2007 Kim and South Korean President Moon Jae-in will meet face to face in April for talks. And in this meeting both leaders will lay the groundwork for a meeting between Kim and Trump later this year.Why this sudden change of heart?

In fact the Winter Olympic Games in South Korea gave Kim an opportunity to announce on the annual New Year’s Day address that “it will serve as a good occasion for demonstrating our nation’s prestige and we earnestly are willing to dispatch our delegation and with regard to this matter, the authorities of the north and the south may meet together soon.” And the world looked wide-eyed. North Korea’s delegation to the Olympics had an unusual attraction – it was Kim Yo Jong, the North Korean leader’s sister. She received positive media attention from the South Korean press. She met with Moon and relayed her brother’s invitation for Moon to visit him in Pyongyang, hoping they could meet at an early date. Near the end of the games, Kim Yong Chol, North Korea’s top representative at the closing ceremonies said that Pyongyang was finally ready to chat with Washington. The Trump administration responded cautiously.

Even another bone of contention – the US-South Korea military drill which Pyongyang considered a veiled training for a future war – was delayed until after the Olympics. It was a big relief as it was proposed by none other than South Korea which the US happily accepted.

And then Kim Jong Un traveled to Beijing to meet Chinese President Xi Jinping. This was unexpected as it was the first time Kim has set foot outside North Korea since he took power in 2011. Kim agreed to meet with Xi because he needed his support ahead of potential talks with Trump. Kim probably realized that if he was going to meet directly with the United States, he needed Beijing’s support in that meeting to gain some sort of leverage in those discussions. Kim might have been seeking reassurance from China ahead of his talks with Trump, at which he is expected to raise the issue of US troops in South Korea.

In the years since Kim succeeded his father, the relationship between China and North Korea has deteriorated. Pyongyang’s repeated missile launches and nuclear tests, as well as Beijing’s endorsement of United Nations Security Council resolutions against the regime, including a ban on North Korean exports, have done little to help the situation. North Korea has also repeatedly criticised China for siding with the United States, and warned Beijing to stop the ‘dangerous move of collapsing the pillar of North Korea-China relations’. Not to forget, when the head of the Communist Party’s International Liaison Department travelled to Pyongyang in November, Kim did not meet him.

On the other side, it seems President Trump also doesn’t want to put America into another war. He knows the US citizens are in no mood the country should open another front that is going to cost thousands of lives. Trump appeared very optimistic about his proposed talks with Kim and tweeted that he and Kim look forward to meeting each other. But this China visit is intriguing. It seems North Korea came to the realization that the threats of a military strike were very real, and so they needed the Chinese help. White House hailed Kim Jong-un’s surprising visit to China as a positive sign in a right direction ahead of a proposed summit with US President. However, this move reaffirmed China’s intent to play a significant role in any developments in the Korean Peninsula.

But will the meeting succeed? This is a big question. Trump administration had been demanding full denuclearisation as the starting point of talks. Kim knows that if the US were to attack North Korea, China would intervene — not in support of North Korea, but rather in support of its own interests and would possibly even collaborate with the Americans. That would mean the end of Kim’s regime. So Kim had no other option but at least suggest that he was interested in denuclearization. The White House press secretary has been repeatedly saying that the United States and the world must continue to make clear that North Korea’s nuclear and missile programs are a dead end. Trump will certainly want Kim to give up his nuclear weapons, which Kim is unlikely to agree to do so. Having China’s support allows the North Korean leader to feel more comfortable defying the American president.

In fact China is more of a frenemy of the US. The US has too many concerns and takes a big political risk if it deals with North Korea directly, so US will have no problem if China is the mediator. But by being the mediator, China is going to make sure its interests are served first and above everyone else’s. The new development should also not be ignored. China has just implemented retaliatory tariffs of up to 25% on $3bn in food imports from the US, raising uncertainty over the possibility of a trade war between the two countries. China’s ministry of commerce said it would be suspending tariff concessions on 120 US food products. The meeting between Trump and Kim is something of global importance. But before that China and the US should resolve issues through negotiation and dialogue.