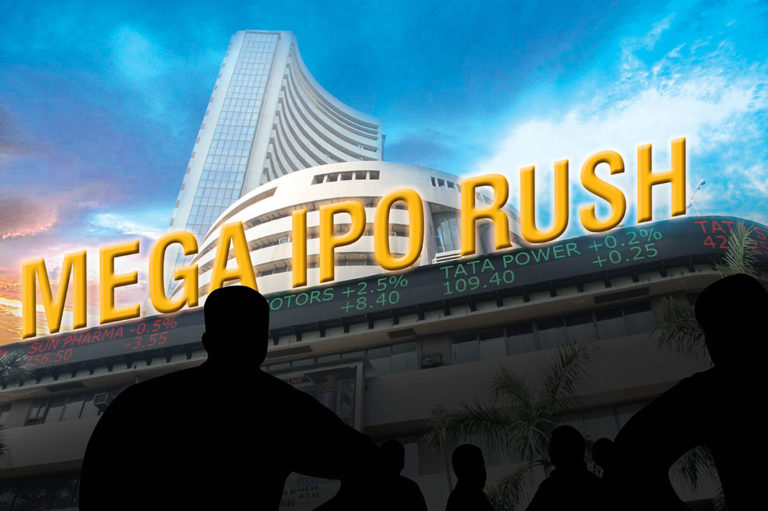 What it says about future equity returns

Whenever the secondary market booms, come the promoters of companies with their IPOs, enthusiastically supported by pink papers. Investors are lured in such a way with the euphoric feelings and intense excitement that, even after having burnt their fingers in the past, still they come again believing the party will continue ad infinitum.

One of the first IPO boom recorded in the history of the stock market was in USA, way back in 1825. Anecdotal evidence suggests that a man had been squeezed to death in the stampede to buy shares in the new Bank of Southwark. The higher mortals hired thugs to punch their way to the front of the line. All this ordeal suffered only to see the value of the shares purchased losing roughly by a quarter of their value in next few years.

The current mad rush for IPO in Indian market and especially in last one month of FY18 is nowhere near to above incidence nor it is comparable, however, the result is likely to remain the same. Many of the current issues are likely to lose some part of their value in coming years. This is even visible now when 5 out of 8 issues hitting this year are trading below their issue price. When we extend this for the entire FY18, the picture does not get very rosy. Out of 37 companies getting listed in NSE in FY18, 16 companies have given a negative return compared to its issue price. This is against the backdrop that broader and Frontline equity indices have given a return of 15% and 12%, respectively.

There has been a change in stabilising forces that were fueling market rise such as low-interest rates, lower inflation, central bank liquidity and macroeconomic stability. Therefore, we may see the market correcting further and most of the IPOs will be trading below their issue price. Nevertheless, we suffer from amnesia when it comes to financial lessons and moreover fear of missing the bus drives increasingly extreme behaviours.

Coming back to a number of IPOs in FY18. month-wise analysis of data shows that last month of FY18 remained fairly active and every week two issues hit the primary market raising to the tune of almost `15000 crore. The reason for such hyperactivity was because month of February remained quite subdued in terms of IPOs and implementation of long term capital gain tax from FY19 (for detail see the box: Reasons for higher IPOs).

What is interesting is that this IPO boom is not limited only to the Indian market and has been a global phenomenon. Last year globally too exchanges attracted the largest number of public issues since the financial crisis. According to a data by Dealogic, almost 1,700 companies floated in 2017, an increase of 44 per cent over 2016 and the most initial public offerings since 2007. The last quarter of FY18 too followed the Indian way and global proceeds from IPO rose to USD39 billion in the first quarter of 2018, the highest since 2014, as companies rushed to take advantage of generally strong equity markets and robust economic growth amid signs that they may not last.

What IPO boom says about the future

Historical evidence suggests that major IPO boom is generally followed by a drop in the stock market and sometimes drastically. Previous IPO booms in the year 1992, 1994, and 1999 and again in 2007-08 resulted in extremes in the market that ultimately led to sharp fall in the market and in the process destroying the wealth of investors. The last time we saw such major IPO rush was in year FY08 and we saw what followed was one of the largest fall in the stock market in recent history (Frontline indices fell by more than 50% from their peak) and investors witnessing billions of their investment evaporating in no time.

Benjamin Graham, who is regarded by many to be the father of value investing and who coached and mentor another value investor with the name of Warren Buffett wrote a great book, “The Intelligent Investor”. In this book, he defined IPOs. He said that intelligent investors should conclude that IPO does not stand only for ‘initial public offering’. More accurately, it is a shorthand for ‘It’s Probably Overpriced’, or ‘Imaginary Profits Only’, or even ‘Insiders’ Private Opportunity’. The last one seems to aptly fit in a current condition where the offer for sale is more.

Are we sitting on an IPO bubble?

So, the current IPO signals to the same fate? Are we again sitting on an IPO bubble that will ultimately lead us to a market crash? Not necessary every IPO boom follows a market crash. According to a research published by Harvard, higher numbers of IPOs are only one of the factors that indicate the market may fall. Another two factors that reinforce market fall are increasing volatility and accelerating price rise also known as ‘melt ups’.

What constitutes a higher number of issues is very subjective. Hence to bring in more objectivity to this we have normalised the issue size by dividing the average market cap of that year. This helped us to objectively analyse the issue size as the same amount of money raised in different years will have different implication in the market depending upon the overall market cap. Therefore, `52000 crore issued in FY08 had larger implication in the market compared to the same amount raised in the financial year ending March 2018 as the market cap of the equity markets has increased in between. We found that as the size of the issuance increases compared to its total market cap of the equity market, the probability of the fall in the market increases. We can see this during FY08 when the funds raised were 1.00% of the market cap of FY08 (see table: IPO Issues Compared to Market Cap).

Similarly, in the year FY11 we saw the fall in the market despite as the amount raised was to the tune of 0.86%. Nevertheless, in FY04 and FY05 despite larger issuance compared to an average market cap of equity market at that time, we see that market gained further height in the following years. The reason for this is that the other two factors – that is melt ups and volatility were missing.

Market volatility is measured by the VIX Index. VIX index is a volatility index that is a broad measure of the market’s expectation of volatility over the near term. It is calculated from the prevailing index option prices of the Nifty and is usually denoted as a percentage rather than an absolute value. The data about India VIX is available from the year 2009 and hence we could not gauge its impact in year FY06 and FY07. Nonetheless, the evidence from year 2011, 2015 and some part of 2016 shows that higher volatility leads to a correction in the market (see graph: Higher volatility precedes the market fall). Even in the current situation, we are witnessing heightened volatility. Although, it has settled down at a lower level now VIX itself is showing higher volatility in the last couple of months. Nonetheless, it is not at an alarming level now. Besides, volatility and higher IPOs the next important factor to watch is ‘melt-ups’.

Accelerating price increase is also known as
“melt-ups”. Even though the market is up, it is not clear if it is melting-up yet. There is no formal definition of melt-ups, however, some of the study shows that if prices increase by more than 60% within a span of 20 months and still there is valid reason to be optimistic about the economy and stocks, even at relatively high levels. In the Indian context, we saw the market going up by 36% between June 2016 and January 2018, before it started showing signs of nervousness. The Frontline equity index, Nifty was already down by 11.3% from its peak and we have already gone through a mild correction. Nevertheless, this does not mean that the market may not correct further from here.

Besides the confluence of above factors, there are other macroeconomic and global situations changing for worse in last couple of months. There has been a change in stabilising forces that were fueling market rise such as low-interest rates, lower inflation, central bank liquidity and macroeconomic stability. Therefore, we may see the market correcting further and most of the IPOs will be trading below their issue price. Nevertheless, we suffer from amnesia when it comes to financial lessons and moreover fear of missing the bus drives increasingly extreme behaviours.

Reason for such higher IPOs

The sudden rise in the IPOs in FY18 can be attributed to various factors. One of them is definitely a better market condition, which generally attracts more and larger issues. Investors and promoters confidence remains up, investor activity is up and valuations are attractive because of a strong secondary market. Besides the unusual market calm in 2017 had led many promoters and original investors (investors who invest before IPO) to try to take advantage of a rising market. This helps their IPOs to sail through even with higher valuations. We have already seen in the current IPO boom, where company issued shares at a valuation that were higher than their listed peers.

Nevertheless, one of the peculiar reasons for higher issuance this year, despite volatility in the market is re-introduction of long-term capital gains tax (LTCG) from April 1st. Hence, many companies and investors that had invested in companies and looking listing as an exit route wanted to save on LTCG. This is the reason most of the issues are either entirely Offer For Sale or a major portion of the issue was Offer For Sale. For example, one of the biggest issues was that of ICICI Securities, which was entirely marked for Offer For Sale. The company intended to raise around `4000 crore through the issue, which would have saved a tax of around `350 crore for their original investors. Nonetheless, it could raise only 80% of what it planned. This is despite ICICI Securities being one of the largest brokerage having a large network in India and enjoying pan India presence. It was not only the private sector companies that were trying to take advantage of this, even public sector companies came out with a complete Offer For Sale. Case in the point is Hindustan Aeronautics Limited IPO, which was entirely Offer For Sale.

In case of an Offer For Sale, the proceeds made from the IPO will go directly to the promoters, not companies. What this means is that money received through IPO will not go to the company, but will go to promoters who are selling their shares. So both public and private sector companies tried to take advantage of the window of opportunities provided due to the implementation of LTCG from FY19.