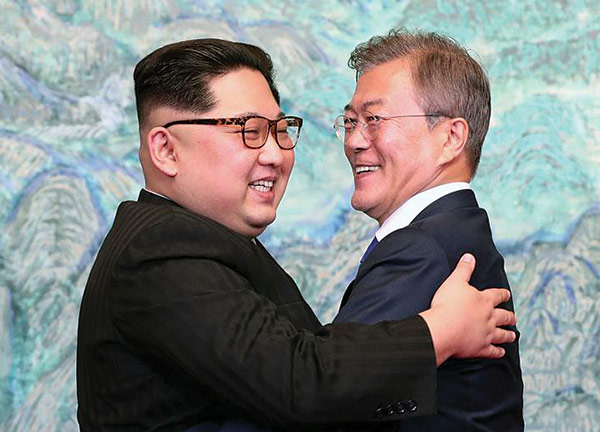 South Korean President Moon Jae-in and North Korean leader Kim Jong Un met finally. It was a very historic and inspiring event for many countries. Suddenly the world changed. And changed for better. At least it seems to be. On this occasion, the two leaders signed the Panmunjom Declaration, which has in its big list many nice, much-needed steps to follow for the two neighbors. The result would not be beneficial only for the citizens of the two neighboring nations, but will also have far reaching impact on the world. The symbolic impact of a North Korean leader setting foot for the first time on South Korean soil cannot be underestimated.

Was it really the first time? No. It has happened before. In fact, such joint statements were also made in 1972, 1992, 2000 and 2007. In spite of that, the scene remained almost same after a brief period of bonhomie. But the times have changed. The world is not today as it was in the last decade. The technological advancement has been continuously changing the permutations and combinations between states. As such, it would be better to ignore the earlier statements.

The two leaders ‘solemnly declared’ that there will be no more war on the Korean Peninsula and thus a new era of peace has begun. Moon and Kim committed their countries to completely cease all hostile acts against each other. These beautiful words and the body language compel us to believe the two leaders. However, we again and again are reminded the earlier pronouncements when similar words were spoken. Like in 1972, the Koreas had agreed to implement appropriate measures to stop military provocation which may lead to unintended military conflict. Then again in 1992, the leaders of the two countries agreed not to use force against each other and undertake armed aggression against each other. But what happened is out there for all to see.

Thus, North Korea’s nuclear weapons are in violation of its commitment to the 1992 Joint Declaration of South and North Korea on the Denuclearization of the Korean Peninsula. In 2007, Seoul and Pyongyang again repeated the same words when they agreed to adhere strictly to their obligation to nonaggression. It didn’t last long. This time again Kim has announced his willingness to dismantle North Korea’s nuclear test site under international supervision and his intention to meet with Japanese Prime Minister Shinzo Abe. He also suggested that Pyongyang wouldn’t need nuclear weapons if Washington signed a peace treaty and non-aggression pledge.

In a recent development South Korea’s government has said US troops will remain in the country, even if a deal is reached to formally end the Korean War. This raises a lot of questions. At present about 29,000 US soldiers are based in South Korea, under a security agreement reached after the war ended in 1953. The first question is – North Korea has made giving up its nuclear weapons conditional on the troops leaving the peninsula. While North Korea has been vocally opposed to the US troops in the past. It has been angered by joint US-Korean military drills. With this announcement South Korea closes the door because it would be difficult to justify a continuing US troop presence if a peace treaty were to be signed. Whereas South Korean government spokesman said their presence was “nothing to do with signing peace treaties and US troops stationed in South Korea are an issue regarding the alliance between South Korea and the United States.” To rewind, in their breakthrough meeting, Mr Moon and Kim Jong-un has agreed to work towards a denuclearised Korean peninsula and a peace treaty to formally end the Korean War. The declaration also calls for future peace treaty talks involving the two Koreas, together with one or both of China and the US.

Anyway, there are some much needed points of agreements that touches the heart of the people of both the nation, like organizing a reunion of families left divided by the war; connecting and modernising railways and roads across the border; changing the demilitarised zone (DMZ) into a “peace zone,” including ceasing propaganda broadcasts and further joint participation in sporting events.

The world also saw a confident and relaxed Kim. The bear hug, handshakes and his broad smiles dispelled the picture of a rigid, remote and autocratic leader in favour of a normal, humanised statesman, intent on working to advance the cause of peace and national reconciliation. Not to forget the truth that under him, the development of North Korea’s nuclear and missile programs has made rapid strides. The reach of North Korea’s missiles has increased. In 2017 the country test-fired several missiles, and claimed it had tested intercontinental ballistic missiles that could reach the US. Even Pyongyang claims it has successfully tested a miniaturized hydrogen bomb that could be loaded onto a long-range missile.

We can only hope that this round of Korean summits will be truly different. Mr Kim is set to hold a further historic meeting soon, this time with US President Donald Trump. Let us hope President Trump at his prospective summit meeting with Kim, would press for an unambiguous commitment to the complete abandonment of nuclear weapons in the North because he has previously questioned why the US is spending so much on its South Korean military presence. An arms reduction in the region will ease the military tension and put a check on China’s aggressive venture.