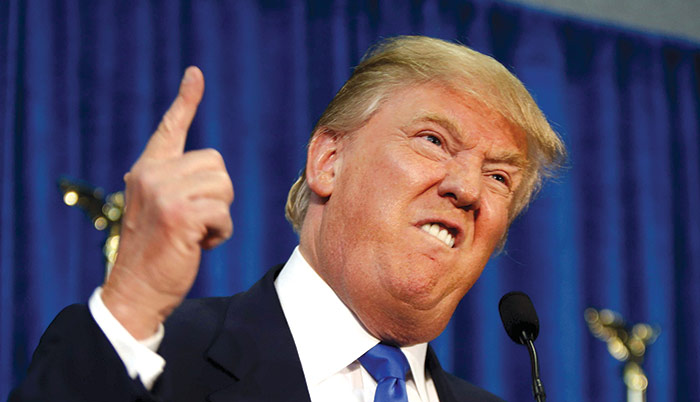 President of United States of America Donald Trump’s decision to enact aluminum and steel tariffs against U.S. allies in Europe and North America is being widely criticized. He is in fact breaking the international system of trade based on mutually accepted rules and principles being practiced since decades. The imposed restrictions on aluminum and steel imports are said to be in the name of national security. Nothing could be more absurd logic. How come the same countries with whom the US has been sharing sensitive intelligence information turn suddenly a threat?

Secondly, it is against the World Trade Organization that regulates international trade. Under WTO rules, the national security tariff is supposed to be wielded only in times of war or when there is a direct threat to a country. Trump administration is arguing that any nation should be able to determine on its own when its national security is at risk and impose tariffs when it wants. Now this logic will open a pandora’s box which will be uncontrollable. Following US any country will erect trade barriers whenever it will feel the need. Remember, it was the same US which was instrumental in establishing the World Trade Organization to adjudicate the rules of global trade.

In fact, U.S. allies have refused to agree to quotas limiting their metals exports, and forced Trump to enact tariffs. Trump has argued that he’s trying to get other countries, especially China, to play by the rules. He tweeted that trade agreements negotiated in the 1990s are past due for an update that better reflects the current realities of the global economy. “When you’re almost 800 Billion Dollars a year down on Trade, you can’t lose a Trade War! The U.S. has been ripped off by other countries for years on Trade, time to get smart!” US feels that Europe and Canada are cheating. They are giving subsidies to some of their industries and putting U.S. companies at an unfair disadvantage.

What he meant is that the US is only trying to save the rules-based trading system. Trump believes that he can use threats to coax concessions out of allies, but he won’t be successful because while South Korea, Brazil and Australia have been more acquiescent, most of the world’s major powers have rejected his demands. As a result, the Mexico, France, United Kingdom, Germany, Canada, Turkey and Japan have either begun or announced plans to launch countermeasures. They are also forging ahead with their own trade agreements without the United States, a situation that could put American companies at a disadvantage. They will also reduce employment because an estimated 400,000 Americans work directly in the steel and aluminum production industries, which benefit from the metal tariffs, there are about 4 million Americans who work in motor vehicle and motor vehicle parts manufacturing, aerospace, and machinery. Those industries will all face higher input costs due to tariffs which in turn will cost jobs.

Thus, the US actions will only create a feeling of chaos and lawlessness. However, the Trump administration has given a signal that it is still eager to negotiate and the motive is only to try to stop a flood of cheap Chinese steel on the world market that has harmed American jobs and industry. To emphasize the Trump administration is sending Commerce Secretary Wilbur Ross to Beijing to discuss rebalancing trade relations between China and the United States.

If Trump really wants to send the Europeans a message on trade to get more concessions he should not bring the issue of national security as the justification and tone down his explosive approach. It is not difficult to address the negative consequences of liberalizing trade without destroying the global trade system. After all, it is the same liberalization, which has brought so much prosperity to the US and to the world.