Top Up Your Portfolio with 5 Turnaround Stocks 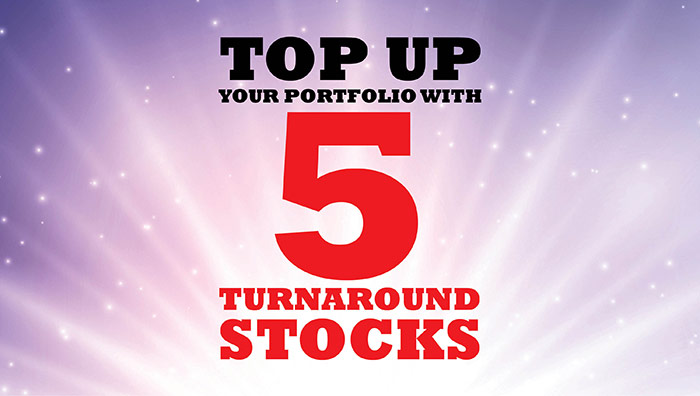 Warren Buffett once said, “be fearful when others are greedy, and be greedy only when others are fearful.” After a dream run that we saw in the Indian equity market in the year 2017, where frontline equity indices moved up more than 25% and broader market indices even more than that, many of you might be fearful and may be wondering if this market is still left with some multi-baggers. Especially after all the volatility, frontline indices are just 4.21 per cent lower than its all-time high.

Although, small cap and mid cap stocks have seen a deeper cut, they are still trading at valuations which is higher than its long-term average. This means that some pain is still left in the broader market. In these conditions, it becomes increasingly difficult to find under-valued companies.

Nevertheless, we at IE&M believe that there are themes and companies that still has the ability to give you better returns from here on. One of the such themes is turnaround companies. These are the companies that made losses in last few financial years or the last financial year and have turned positive in the current financial year. This means that they have turned from red to black in last one fiscal. The transition of companies from loss making to profit making makes them ideal investment opportunity and gives better return to their investors. There are multiple cases where turnaround stories have rewarded their investors heftily.

The power of turnaround companies

HEG, the graphite electrode player turned profitable in September 2017 due to healthy capacity utilization and increase in realization. Its top-line grew by over 100% due to increase in graphite electrode prices. Its operating profit witnessed a prominent 777% growth with over 16% reduction in interest costs. The share price of this company has increased by whopping 580% since then. This is the power of turnaround companies in terms of giving returns.

A case in the point is a company named HEG. This graphite electrode player turned profitable in September 2017 due to healthy capacity utilization and increase in realization. Its top-line grew by over 100% due to increase in graphite electrode prices. Its operating profit witnessed a prominent 777% growth with over 16% reduction in interest costs. The share price of this company has increased by whopping 580% since then. This is the power of turnaround companies in terms of giving returns.

This does not mean all the turnaround stories will give similar returns. However, if they are selected with a robust methodology after understanding the reasons for their losses and why the turnaround is going to be sustainable, they are likely to give returns better than the market expectations.

To come out with a turnaround story that is sustainable, we followed the following methodology –

We started first with an entire universe of traded stock and then came out with 4131 companies.

Out of these, 1427 companies were such that incurred a loss in the last financial year that is FY17 (including those companies that have year ending on June, September and December). Since only a handful of companies have come out with their annual audited results till now, we calculated the required financial figures by adding the last four quarter numbers.

We took into consideration only those companies that have made business losses in the normal operation and not due to some extraordinary or exceptional items. Out of these 1427 loss making companies, 406 companies were such that posted profits this year. Hence, technically they are the turnaround companies.

Hence, we checked the turnaround is accompanied by an increase in sales. Applying this criterion, the number of companies left was 230.

Post this we checked companies leverage and their interest outgo. The reason being, now we are entering scenario where inflation and interest rates are going to increase. Therefore, companies having a higher debt equity ratio will find it difficult to service their debts, especially when their turnaround is at nascent stage. We selected only those companies that have seen their interest outgo lower in FY18 compared to FY17.

Besides the financial, we also scanned various other macro-economic factors, including political landscape to figure out if their turnaround has a longevity. Going ahead, in the year 2019 there will be a general election. The Indian market is very sensitive to political developments, nevertheless, historical results show that even the unexpected results do not impact the market performance in the long run. It may have a temporary knee jerk reaction.  For example, in the year 2004 when the UPA 1 came into power, although, the market fell on the day the election result was declared the following four years was a dream run for the Indian equity market.

Hence, we believe that following five intriguing names that have passed all the above stringent processes could be poised for a bigger run in FY19 and beyond.

After posting a loss of Rs1632 crore in FY17, the bank posted a profit of Rs 202 crore in FY18. The bank dominates its home state with around 50% market share in advances. Similarly, ~85% of deposit is funded from J&K that guards the bank, to a certain extent, from deposit pricing competition. Within J&K, the bank has around 55% CASA ratio and earns lucrative NIM of 6% plus. About 48% of credit exposures are within J&K wherein it earns yields of around 13% compared to sub -12% outside J&K. Slowdown in J&K led to moderation in advances in FY15-17. However, a gradual pick-up is seen in FY18 with growth in J&K state. Going ahead, credit growth is likely to grow at around 17%.

With respect to the unrest in J&K state and its impact on the repayment capacity of borrowers, a special dispensation was provided by the RBI allowing restructuring of loans till December 2017 at lower interest rates, additional sanction up to 20% of existing loan has also been allowed. The performance of the rehabilitated portfolio remains prudent as a marginal proportion of loans have slipped to NPA.

Going ahead, the company is likely to continue with its better performance as demand for Oxo-alcohols is at 2,20,000 MTPA, with a healthy growth rate of 8% to 10% per annum. This augurs well for the company as it is a good opportunity for the company with existing capacity of 80,000 MTPA, considering the huge demand-supply gap in the country. Sales realization is also expected to improve over time, firstly on account of Anti-Dumping Duties imposed by the Government of India on imports from certain countries and secondly fructifying company’s efforts of bringing certain other countries and products in this fold, though it may take some time.

Butterfly Gandhimathi Appliances Ltd (BGAL) is the leading manufacturer of home appliances in India since about four decades. The company witnessed revenue growth of 58.1% in FY07-14. It has been a south-based player with the majority of revenues coming from southern markets. In an effort to expand its geographical reach, the company embarked on a pan-India expansion plan. The contribution from non-south markets should increase from current levels of 17%. The management aims to increase the non-south region share to 30% over the next three years.

FY17 witnessed a disappointing set of numbers. FY17 recorded a revenue de-growth 55% YoY to Rs402.3 crore on account of various variables: a) absence of government orders, b) demonetization impacting consumer sentiments, c) drought conditions and Vardah cyclones denting sentiments in southern areas. This also led to company posting loss of Rs55.5 crore. Nonetheless, sales have picked up in FY18 and the company is back into profit. It posted a profit of Rs 4.81 crore in the same period.

Going forward, with a gradual pick-up in consumer sentiments, we expect revenues to recover from here on. The company has already expanded its geographical reach and enhanced its product portfolio that provides it the capability to compete with other brands on a pan-India level. Moreover, Pradhan Mantri Ujjwala Yojana Scheme (PMUY) aims to provide LPG connections to over 5 crore families by year end of 2019. The total outlay of the scheme is Rs 8000 crore, which provides a good opportunity for the company.

Cochin Minerals and Rutile Limited is a 100 percent Export Oriented unit in the Mineral Processing sector with manufacturing, marketing and research capabilities. The company manufactures Synthetic Rutile and Aqua Ferric Chloride, which conforms to all major international standards. The product range of the company includes Beneficiated Ilmenite (Synthetic Rutile) which is used as Flux component in welding electrodes, feed stock for Titanium Sponge & Ingredients of Special Abrasives; Ferric Chloride – used in desalination plants, in water and sewage treatment, in etching printed circuit boards, in the manufacture of several iron compounds etc.

CMRL started production with a modest capacity of 10000 TPA of Synthetic Rutile and 12500 TPA of Ferric Chloride. Subsequent through innovations and debottle-necking, the company enhanced its production capacity of Synthetic Rutile to 50,000 TPA, Ferric Chloride to 30,000 TPA, Ferrous Chloride to 82,500 TPA and Cemox to 20,000 TPA.

This company also exhibited a perfect case of Turnaround Company. From a net loss of Rs 21.51 crore at the end of FY15, the company kept on reducing its losses and finally turned into profit in FY18. This was also accompanied by an increase in sales of the company. Even in the latest quarter results, the company shows improvement at all levels, both on quarterly as well as on a yearly basis. What will also help the company going forward is depreciating rupee. As company exports most of its products, it is going to help the company improve its performance.

After witnessing a loss of Rs10.95 crore in FY17, company’s performance turnaround in FY18 and it has posted a profit of Rs 5.29 crore. This was on back of improvement at all the three levels. Improving performance of dominant Film business coupled with gradual pickup in Specialty Performance resulting in revenue growth of 15%. The EBIDTA grew by 45% on a yearly basis due to higher operational profitability driven by improved product mix and strategic cost saving initiatives. Last, but not the least,  revival in Specialty polymer business coupled with strong momentum in Film business resulted in a turnaround of the business. The company has 18 products at various stages of development of which patents have been filed in respect of 7 and has high entry barriers protected by Intellectual Property rights.

Going forward, the company is expected to continue its momentum as demand, supply situation at domestic level remains at equilibrium with a limited capacity addition in the near term. The pricing environment is also expected to be better going forward. In addition to the above factors company is also working towards increasing the share of value added products at around 35% by FY20.