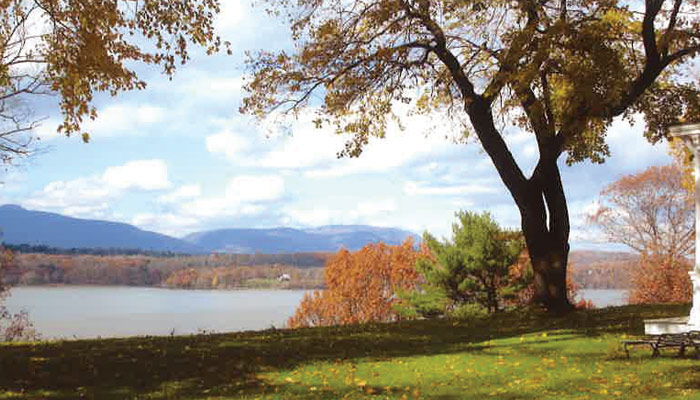 When growing up in New York City, Central Park lay at the center of my small world. Our apartment, and the elementary school I attended, were only blocks from the park. Later on, the Hudson River became a part of my life when I fell in love with transatlantic ocean liners and began reading the shipping news in “The New York Times” listing vessel arrival and departure times.

The Queen Mary, with her three smokestacks, was my favorite. When her sailing time was announced, I would ride my bicycle from East 96th Street, where we lived, to the North River passenger ship piers on Manhattan’s West Side. There I would watch excited passengers arrive by taxi, loaded-down with luggage, to board the ship. The idea of a journey by sea of thousands of miles, starting at West 55th — from the New World to the Old — fascinated me.

Following the Queen Mary’s departure from her pier, assisted by tugs, I bicycled four miles to the Battery at the southern tip of Manhattan Island. From there I would watch the Queen Mary grandly emerge from the mouth of the Hudson River into the Upper Bay of New York harbor and continue her royal progress to the Narrows and the sea beyond. Not until the top of her third smokestack disappears from view do I move.

In New York, we ignore a daily primal event occurring in our midst as we go about the city performing tasks. I speak of tidal flows. By the time high tide arrives, 260 billion cubic feet of ocean water will have surged through the Narrows into the Upper Bay. The Hudson is both river, 315 miles in length, and tidal estuary. In its latter role, as an arm of the sea, ocean waters rush up the river, causing the south flowing Hudson to reverse course, and bringing salt seawater as far north as Poughkeepsie, 90 miles from the city, with the tidal impact reaching as far as Troy, 164 miles from the city. Salt and fresh water meet, the fresh water emanating from Lake Tear of the Clouds in the Adirondack Mountains, and from rivers, mountain streams and hundreds of creeks flowing into the Hudson. The Mohican Indians aptly named the river, Muhheakunnuk, “Great Waters constantly in Motion.”

The city has a second tide, far more visible : The arrival of peoples from many lands. Henry Hudson, an Englishman by birth and explorer for the Dutch, arrived in 1609. New Amsterdam was founded in 1625. Less than 30 years later, 18 languages were spoken in the city. Waves of immigrants arrived in the 19th century from Ireland, Germany, Italy and Eastern Europe. Newcomers continue to arrive from many other parts of the world. A diverse population has been a constant throughout the city’s history. Today, people from nearly every land live in New York.

The flow of tides and peoples, past, present and future. These lines of Walt Whitman are embossed on an iron railing at the Battery:

City of the world! (for all races are here,
All the lands of the earth make
contributions here;). City of the sea!

A sailing adventure on the Hudson River. I report to Petersen’s Boatyard,arriving with possessions stowed in a sailor’s bag — actually,my laundry bag — as Ishmael would have done when boarding the Pequod in “Moby-Dick.” The vessel: “The Venture,”a performance sailboat of cutter design.Length,40 feet; mast, 55feet; beam,11 feet.Crew: Captain S.Hazard Gillespie,approaching his 94th birthday; cook, the captain’s “young brother,” David;first mate,Richard;second mate, Matt.I am cabin boy.

My fellow crew members are experienced sailors.I am a land andpleasure loving city dweller.The movement of the earth excepted,I prefer not to be in motion,especially not being bounced around in a boat in rough seas.I am on the Venture because of the advocacy skills of Captain Gillespie who charmed me into this undertaking against my better judgment.In all his undertakings,Hazard was an enthusiast.Such an appealing human quality! How I miss his passing.

The first night we “camp out” beneath the George Washington Bridge.An odd anchorage.I never thought I would be sleeping under a bridge.Across the river,on the city side,silver passenger trains speed north and south.Airplanes overhead prepare to land at city airports.Geese and cormorants fly above the water.From my ever restless city,the familiar sounds of drums and sirens.

At 6 a.m. we depart our anchorage and proceed down the river on an ebb tide.The wake of passing ships cause the Venture to sway in ways I do not find comforting.

Rounding the Battery,we sail up the East River,passing under the Brooklyn and Manhattan Bridges.In this city of bridges,we proceed under the Triborough and Hell Gate Bridges.At the Throgs Neck Bridge, we enter Long Island Sound.The Sound brings a world of lighthouses,buoys bells,lobster traps and oyster beds — a scene more New England than New York.Our destination : Newport,RhodeIsland.

Hazard and I sleep on the deck.On the final night,it pours.Stumbling around in the dark,I manage to snap the rain-protecting canvas in place.My first nautical achievement.Most of the time I have been hitting my head on various hard shipboard objects.In gratitude for this service, Captain Gillespie,with full crew assembled,raises my rank from cabin boy to seaman.

A dear friend invites me to visit Midwood,her house overlooking the Hudson River in Columbia County,100 miles north of the city.I board the train at Pennsylvania Station.We pass under the George Washington Bridge.The Palisades appear.It is always a thrill for me to come upon these dramatic cliffs,a mere twenty minutes from manmade midtown Manhattan.The train crosses a bridge linking Manhattan to the Bronx and the North American mainland.We New Yorkers,excepting those living in the Bronx,are an island people.The train passes through the beautiful Hudson Highlands.This river deserves a great composer.Why should the Rhine be celebrated in opera and not the Hudson.

Joan’s house is on a bluff overlooking the river.It is a “Livingston house” built in 1888 by descendants of the colonial Livingstons.One Livingston ancestor had the high honor to administer the Presidential oath of office to George Washington on the steps of Federal Hall when New York was the nation’s capital.Eleanor Roosevelt,whose mother was a Livingston,grew up in a nearby Livingston House.

Joan describes the river view from the back porch as “the wholepoint of the house,” a magnificent view framed by two stately maples.Once I am seated on the back porch,I refuse to be dislodged,rejecting all offers togo sightseeing.Ah,the river ! A breeze forms white caps on the water.Other times,the water is still.Across the river,a profusion of trees lead to the Catskill Mountains.Behold,a river-mountain sunset.Darkness.Fireflies.A cicada symphony.Train whistles from both river banks as passenger and freight trains pass.

My favorite room,”Riv Vu,” is on the second floor.It is tiny. The bed is placed against the room’s one window.Lying in bed,I feel at one with the river.Should I fall out of bed in a dreamlike state,I may land in the river.

Gazing at the moonlight on the Hudson,I think of Flaubert in his house by the Seine.From the bedroom he wrote,”I can hear the great tulip-tree under my window rustling in the wind,and when I lift my eyes I see the reflection of the moon in the river.” At night,Flaubert saw the boats of eel fishers on the Seine. I see a flashing mid-river Hudson beacon.

The generosity of my friend and the glories of the river led me years ago to add Midwood to my list of favorite places on the planet.