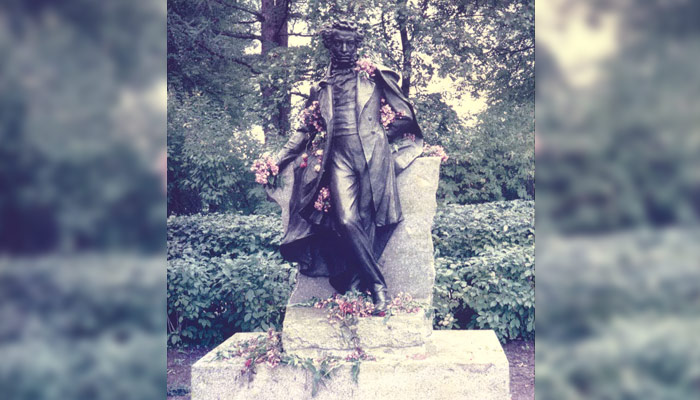 Mother introduced me as a child to the great poet of Russia, Aleksandr Pushkin (1799-1837). Russian-born, mother enjoyed reciting his poetry at home in the living room before an audience of two, Elinor, my sister, and me. She had memorized his poetry when growing up in St. Petersburg in pre-Revolutionary Russia.

A favorite passage of hers was the letter-writing scene from Pushkin’s verse novel, “Eugene Onegin,” where the youthful Tatyana declares her love for Onegin. Moody and world weary at age 25; he does not take her seriously and rejects her. Returning from abroad four years later, Onegin encounters Tatyana at a ball in St. Petersburg. She is radiant and elegant, utterly transformed from the girl in the provinces and now married to a prince. This time it is Onegin who declares his love in a letter and this time it is he who is rejected. Life, she tells him, has moved on. She leaves and he is left behind distraught. In Russian, it all sounded beautiful. Being theatrical, mother carried the scene off very well.

Pushkin’s origins are as extraordinary as his life. His maternal great-grandfather, Abram, may have been the young son of an Abyssinian emir. Pushkin indicated that he was “stolen from the shores of Africa.” Captured by Turks, Abram was taken to Constantinople. At the time, blackamoors — young black boys — were popular at the courts of Europe. Tsar Peter the Great had instructed the Russian ambassador to find one for him. At age 8, the boy was abducted from Constantinople and brought to Russia.

“Abram was from the beginning a favorite of the tsar,” writes T.J. Binyon in “Pushkin, A Biography.” The boy slept at the foot of the tsar’s bed. Peter had Abram baptized, with Peter serving as his godfather. He was now called Abram Petrovich (son of Peter). He traveled abroad with Peter, remaining behind in France to study fortifications at a military academy. Later he acquired a surname, calling himself Hannibal, after the great Carthaginian general. Abram Petrovich Hannibal rose in rank, eventually becoming chief of the Russian engineer corps with the rank of major general.

On my first trip to Russia, I visit Tsarskoye Selo (“Tsar’s Village”), fifteen miles south of St. Petersburg. I have come in homage to Pushkin to visit the Lycée, the school built by Catherine the Great for the sons of the nobility. Our poet, Aleksandr Sergeevich Pushkin, the son of a nobleman — indeed, the Pushkins were an ancient Russian family — studied at the Lycée from 1811-17. In a class of 29 students, he ranked a lowly 26, but excelled in Russian and French literature, a foretaste of great things to come.

Pushkin’s official entry into the literary world took place at the Lycée on January 8, 1815 at age 15, on the occasion of the qualifying examination for admission to the upper school. Distinguished audience members included the Minister of the Interior and the ancient and much revered Russian poet, Derzhavin. Pushkin recited his own poem, “Recollections of Tsarskoye Selo,” to the assembled guests, standing only feet away from Derzhavin who “stared in astonishment at this strange youngster with the dark skin and woolly head.” Pushkin recited these lines on the 1812 burning of Moscow from his poem :

Where are you, lovely Moscow of the hundred cupolas,
Wonder of our land?
There where the solemn city reigned,
Nothing but ruins remain….
Where the scent of myrtle hung…
Now there are embers, ash and dust.

At the conclusion of his recitation, Derzhavin wept, later saying, “This is the one who will take Derzhavin’s place.”

Pushkin was poet, novelist, short story writer, historian and dramatist. (Two of my favorite operas, Tchaikovsky’s “Eugene Onegin” and Moussorgsky’s “Boris Godunov” are based on Pushkin works.) And he was a renegade, incurring the wrath of Tsar Nicholas I. These two poems suggest why. At age 24, he writes:

Like the lamp that pales
In the dazzle of dawn,
False knowledge flutters
and is consumed
By the sun of the mind.
Long live the sun!
And down with night!

To be dependent on a monarch, or the multitude…
To me, one is no better than the other. I want to live
My way, serve no one but myself and please no other,
Not bend my mind, my honor, or my knee
To any power or any livery. I want to go
Here and there, wherever my fancy leads,
To admire the divine beauty of this world,
Tremble with ecstasy, happiness and love
For the creations of art, for genius….

Sent in exile by Tsar Nicholas to the Caucasus and Crimea for periods of time, Pushkin was able to revel in some of these experiences. Of his time at Gurzuf in the Crimea, he wrote:

I lived like a recluse, bathed in the sea, and
gorged myself on grapes; I felt immediately
at home in the southern climate and luxuriated
in it with the laziness and insouciance of a
Neapolitan lazzarone. I loved to wake at night
and listen to the sound of the sea for hours.
There was a young cypress close to the house;
every morning I went to visit it and in the end
I felt something akin to friendship for it.

In St. Petersburg, I visit the dueling ground where Pushkin was mortally wounded. Following a trolley car ride and lengthy walk, I come to an obelisk bearing a medallion with a portrait of Pushkin. He, like his creation, the poet Lensky in “Eugene Onegin,” died in a senseless, avoidable duel far too early in life.

From here I proceed to the house where Pushkin had rented rooms at No.12 Moika Embankment in the heart of the city, not far from Palace Square and the Hermitage. Severely wounded, he was taken to his rooms after the duel. As Pushkin lay on the sofa in the library, his life ebbing away, he looked at the shelves containing his books. To them he addressed the words, “Farewell, my friends.” He died two days after the duel at age 37.

No, I shall not die entirely! And my soul,
My lyre will outlive aches and the void….
I shall long be deemed congenial
For having taught my voice to sing
Of noble hearts, and freedom in a cruel age….

Postscript
At the time of Pushkin’s death, Gogol wrote, “With him goes the greatest joy in my life.” The 16-year-old Dostoevsky went into mourning. Pushkin was a favorite of Tolstoy and Chekhov. Pasternak, years later, declared Pushkin’s tetrameter to be “a measuring unit of Russia’s life, a yardstick, as if it had been patterned after the whole of Russia’s existence….”

Until Pushkin, Orlando Figes notes in his splendid book, “Natasha’s Dance, A Cultural History of Russia,” Russia barely had a national literature. In the last three-quarters of the 18th century, of 500 works of literature published in Russia, only seven were of Russian origin. Unlike England and France, Figes notes, in Russia there was a huge divide between the written and spoken languages.

Pushkin filled the need to create a literary language rooted in the spoken language. Troyat calls Pushkin “the source….He made the Russian language ….” Turgenev said of Pushkin’s contribution: “There is no doubt that he has created our language of poetry, our literary language, and all that remains for us, for us and our descendants, is to walk upon the trail broken by his genius.”

Pushkin is buried in the province of Pskov, southwest of St. Petersburg. In 1742, extensive lands in Pskov had been granted to Abram Petrovich Hannibal by the Empress Elizabeth, Peter’s younger daughter, for his services to the state. In death, the national poet of Russia and his remarkable ancestor from Africa came to share a portion of the same Russian earth.