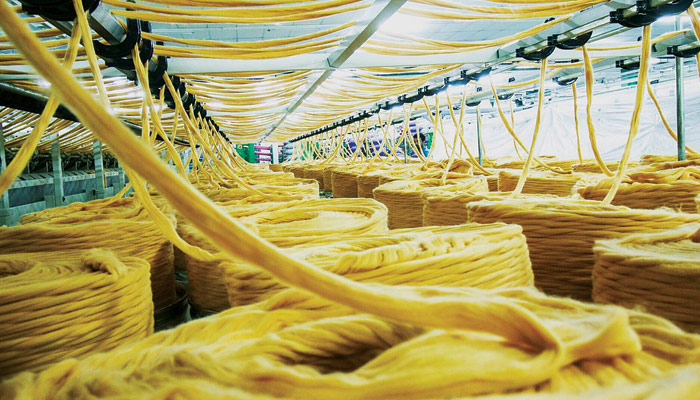 Trident Limited, the flagship company of the Trident Group, is a leading manufacturer of yarn, Bath Linen, Bed Linen and wheat straw-based paper, Chemicals and Captive Power. It started as a cotton yarn manufacturer in 1990 under the name of Abhishek Industries Limited and later diversified into home textiles. Currently, the company has manufacturing facilities in Barnala (Punjab) and Budhni (Madhya Pradesh). Its founder promoter Rajinder Gupta is a first-generation entrepreneur. The company’s first yarn plant in Sanghera, Punjab, which produces both cotton and blended yarn, was financed by a public issue in October 1992. With the amalgamation of Abhishek Spinfab Corporation Ltd in 1999 and Varinder Agro Chemicals Ltd in 2002, Trident diversified into terry towels and paper. The company has significantly invested in modernizing assets and in forward/backward integration. In FY11, Trident undertook expansion of cotton yarn manufacturing in Barnala and Budhni, mostly through debt funding and the rest through equity/internal accruals.

In FY16, Trident forayed into bed linen by Company is the largest wheat straw based paper manufacturer with a capacity of 175,000 MTPA in Punjab. Trident is amongst North India’s largest commercial and battery grade sulphuric acid manufacturer with an installed capacity of 100,000 TPA. It caters diverse battery needs and finds usage in the production of zinc sulphate, alum, detergent and dye and fertilizers.

Equity capital & holdings
The Company’s equity is Rs509.60crore while it has huge reserve of around Rs2519 crore. Promoters hold 68.45%, DIIs hold 1.62% while investing public hold 28.12% stake in the company. Promoters have increased their stake by 0.68% in last six months which is positive. It has a share book value of Rs57.95 per share and price to book value ratio stood at just 1.10. It has paid 15% dividend for FY18 and paid 12% interim dividend for FY19.

Textile Industry Overview
The global textile and clothing industry trade is estimated at US$800bn and has been growing at around 10% CAGR over the period of 2012-2017. Out of the total industry size, 60% is captured by clothing or apparel segment while the rest is from the textile segments. The textile and clothing trade is expected to grow at around 4% annually over the next decade and is expected to reach US$1300bn. The global home textile market is valued at US$104.2bn, which is expected to grow 3.5% CAGR over 2015-2020 and reach close to US$131.5bn. Growth in the home textiles would be supported by growing household income, increasing population and growth of end use sectors such as housing, hospitality, healthcare, etc. In the global textile market bed linen and bed spread account for the largest market share of 43.9% in 2014. This is expected to reach 60.8bn by 2020; this represents a growth of almost 4.4% CAGR between 2015-2020 and market share of almost 46%. Bath / Toilet Linen accounting for the second largest market share is expected to grow at a second fastest growth rate of 3.5% after Bed Linen & Bedspread and is expected to reach at US$26.4 billion by 2020 representing 20.1% market share.

India’s contribution to the home textile industry is at 11% behind China with 35% share. The US home textile market which is 17% of the total home textile market, India’s share stands at 31% just behind China with 39%. In terms of cotton textile products like bed sheets, India is the largest supplier globally with 48% share. The Home textile industry is expected to continue on its upward journey owing to rising consumer driven by the dominance of organised retail. Bed linen and bed spread segment accounted for 58.1% of the Indian home textile market worth US$ 2.1b in 2014, and is expected to witness highest growth over 2015-20 (CAGR of 7.4%) to reach US$ 3.3b. Bath/Toilet linen, which held the second largest market share in 2014, is expected to register a CAGR of 6.9% to reach US$ 0.9b by 2020.

Our Take
The Company has plans to enhance its product mix by increasing the percentage of Value added products in its product portfolio. It is also focusing on increasing its customer base and deepening its market presence. The Company strives to increase the volume with existing customers and also add new customers in its stride to fill in the capacities. It has taken cost optimization measures in major areas of operations to ensure competitiveness. The Company increased its production capacity by 10% in FY18 and utilizes in-house energy generated from its 50 MW plant that helps it to optimize power cost in comparison to state electricity board. Currently, the stock is trading at just 10.9x. Looking at the trend investors can accumulate this share between Rs63-55 in staggered manner with a stop loss of Rs48 for an upper target of Rs105-110 in next 15 to 18 months.