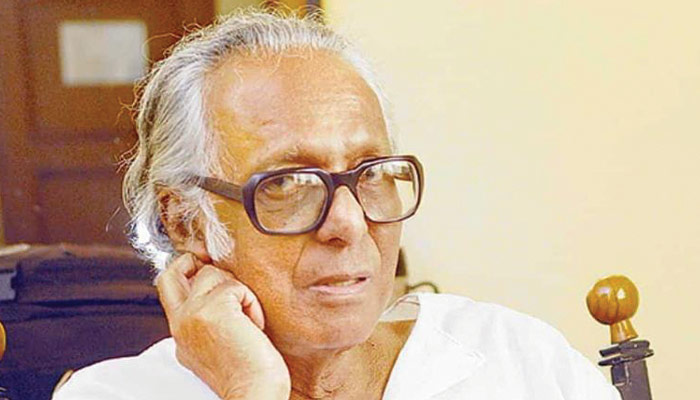 The year 2018, for me, ended with a very sad note. Two great personalities, I admired for different reasons, left for their heavenly abode in the last days of the year – Mrinal Sen and Kader Khan.

Mrinal Sen was the last surviving grand old man of Indian cinema – the Ray-Sen-Ghatak triumvirate, which has played the most important role in the evolution of Indian film making craft. Mrinal Sen and Satyajit Ray are the two names which feature in the realm of world cinema with legendary directors such as Jean-Luc Godard, Francois Truffaut, Michelangelo Antonioni, Ingmar Bergman, Akira Kurosawa, Federico Fellini and others for they introduced a distinctive style and innovative cinematic language.

The personality of Mrinal Sen could be gauged by one instance: it was probably 1998, when Sen received a poem from Nobel Prize-winning writer Gabriel Garcia Marquez, who was seriously ill those days (He died on 17 April 2014, much later). The poem was significant since it was something like a last letter to one’s close friends and well-wishers. It is said La Marioneta in Spanish, a farewell poem. Marquez had sent this poem to his friends across the world, some 70-odd people. Mrinal Sen was the only Asian to receive the poem. Sen had first met the celebrated author at the Cannes Film Festival of 1982. Hindustan Times (HT) made it the lead story of the day. Indeed it was. HT reporter Ashis Chakrabarti had translated the poem which I still remember and I quote:

“If I were to be given another life
I would dress simply,
Throwing pretensions to the sun,
And leaving not only my body,
But also my soul exposed…..”

This is how the poem begins and I again quote Ashis, “If for an instant God should forget that I am a puppet and were to give me another piece of life, possibly I wouldn’t say what I think, but I would certainly think all that I say.” It goes on,

“I would sleep little and dream more,
because I understand that for every minute
that we close our eyes,
we lose sixty seconds of light.”

The poem ends on a cynical note,
“There are so many things
I have learnt from you all.
But finally they don’t help because,
unfortunately, when they put me in the coffin,
I’ll be dying.”

I wrote a piece and published in ‘The Scoria’, a literary journal I was publishing those days (and where this column was started) while working for The Indian Express group. A friend gave a copy to Mrinal Sen and when I met him around 2002 he still remembered that. When I told him that my first job was with Ordnance Factory in Kanpur, he immediately opened up and spoke a lot about his days spent in Kanpur where he was a medical representative during his younger days. He smiled a contagious smile. His enthusiasm for everything around him was infectious. He asked us to dream, dream big and dream small, because “people have stopped dreaming and that’s very bad.” I think he was one of the great intellectual minds we had in last several decades.

That was my first meeting with the great filmmaker. Later in 2012, I wanted to shoot a documentary on him but he was ill those days. My friend Nirmal Dhar, Secretary, Bengal Film Journalist’s Association tried on my behalf many times but there was one or other reasons and it was pushed for some other time. I mailed him nine questions which he liked and was very keen but then his wife fell ill. Another friend Film Director and Cinematographer Kishore Kumar Giri kept asking me when we’re going to Kolkata, but it was not to be. That’s a big regret. Regret because when I met him, he was quiet old and a Rajya Sabha member, but I found the fire of protest was still burning as brightly as ever when he spoke. I found him to be perhaps, the most accessible and talkative personality. But lastly he proved what he said “By nature, I’m always liberal at making promises and keeping very few.”

After meeting the great man I wrote in my diary – “memories are reconstruction rather than being photogenic” and “because memories are never annihilated.” These were his words.

I was fascinated with his personality, the kind of aura he emanated, a kind of powerful brooding air. He was a born intellectual and widely read. In a very brief meeting he spoke Bipin Pal, Netaji Subhash Chandra Bose’s visit at his home, Kalighat’s Paradise Café, Ritwik Ghatak….so many names……after all you don’t meet people every day who have passed through the turbulent phases of Indian and world history. Those days he was writing his memoir ‘Always Being Born’. Dear readers, ‘Always Being Born’ is not just a memoir, it’s a sky which has all the colours you can imagine, from life to history to cinema – chronicling a complete journey of an awakened mind. In the book he mentions two books, Tagore’s “Sabhyatar Sankat” (A Crisis of Civilisation) and Bibhutibhushan Bandyopadhyay’s “Anubartan” which enabled him to get a comprehensive idea of the history of the times, which were instrumental in his stepping out into the greater world and ensured that “he became a citizen of the world.”

Mrinal Da was a voracious reader. Personally I’ve been greatly benefitted by his books, films, and long interviews. I was introduced to one of my favorite Czech author Karel Capek by him (it was Karel who first used the word Robot in his play R.U.R.). In fact Sen had translated one of Karel’s books ‘Cheat’ into Bengali, which was his first publication.

When on March 19, 1995, the scene was enacted – Workers Leaving The Factory (an 1895 film, often referred to as the first real motion picture ever made; considered the first shot), 30 Workers were replaced by 30 directors and Sen was one of them. All 30 directors earned the distinction of being called the ‘Inheritors of Luis Lumiere’. Andre De Toth, the Hollywood director, actor, producer since the ‘30s said to Sen: “Hey, you walk like a rabbit.” Sen laughed a hearty laugh and said, “Don’t worry, I’ll maintain the same speed on way to my funeral pyre.” Next day again Sen met Andre, who asked: “How old are you?” Sen replied, “One year older than the last year, or perhaps, one year younger than what I’ll be next year. Take it whichever way you will.” It shows his sense of humour.

Always in his simple Kurta and the trademark spectacles he had a typical attitude with his own standpoint, carried certain sophistication, and a certain critical perspective. And all these attracted people towards him. In all his films, we find his protagonists having physical as well as intellectual perceptions. He was politically very conscious and in his films, to a certain extent, he has always expressed his political inclinations. His films rarely found success but they are all very brilliant. In 1983-84 when Peter Cowie selected Top 10 Films of the World Cinema for International Film Guide Khandhar was one among those top 10.

Before I conclude I would like to quote him since it summarizes how he lived and what he stood for. These are the concluding lines of his convocation speech at the FTII, Pune: “Remember, when you touch your multifaceted medium, you touch man. As you serve your medium, you serve your conscience too. And as you walk into the world, you take chances or play safe. By taking chances, you achieve or perish. Or playing safe, you just survive. The choice is yours. Till the time you choose, I wish you all a very tough time.” He often said, “I wish life was a dress-rehearsal and I could do it all over again.” RIP Dada. We know in death too you will chart your own way as you said: “I collapsed, I survived, and I kept going my own way.”