Betting On These 5 Beaten Down Stocks 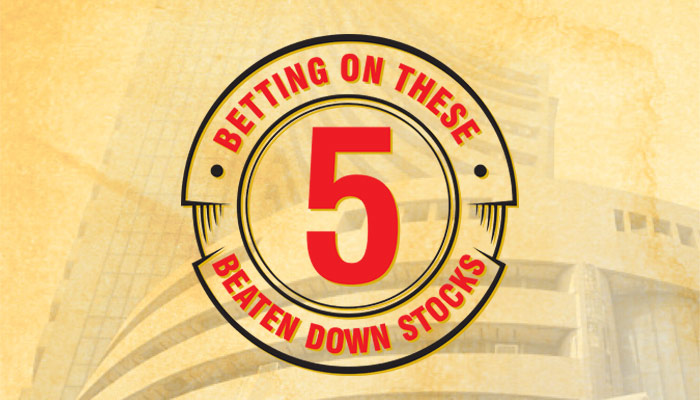 Predicting when stocks will hit bottom is a source of much talk on Dalal Street. It is used by fundamental and technical analyst alike to zero in for investing in stocks. The narrative that goes behind investing in stocks that have fallen precipitously is that it is always darkest before dawn. Hence, the best time to buy a stock is when a deluge of bad news has pushed the price down making it a bargain buying.

Jignesh Bhai a contrarian investor believed that herd behaviour is a rule rather than an exception. Therefore, when he saw a selloff in the shares of an Airline company run by one of the biggest businessmen of that time, he thought it is a temporary phenomenon and shares will bounce back. He bought 1000 shares. Few weeks went and the decline in the share price continued. Jignesh Bhai convinced of promoter’s business acumen and running another group successfully, increased his stake further. A couple of months gone by, the share price of the Airline company was quoting at single digit now. Without any self-doubt, he further bought shares of the Airline company and he believed that the promoter’s good relationship with politicians and bankers will help him to revive the business sooner than later. Nonetheless, after a few months the Company closed its operation and what everyone knew was inevitable happened, the share got delisted. Jignesh Bhai could do nothing and was cursing this belief.

Therefore, the crowd many times is right than wrong.

The Situation
Predicting when stocks will hit bottom is a source of much talk on Dalal Street. It is used by fundamental and technical analyst alike to zero in for investing in stocks. The narrative that goes behind investing in stocks that have fallen precipitously is that it is always darkest before dawn. Hence, the best time to buy a stock is when a deluge of bad news has pushed the price down making it a bargain buying.

The last one year has really been very bad for the Indian equity market. For every one share that has given positive return in last one year, there are 5.2 shares that have generated negative return. The graph clearly shows how the broader market could never recover after its fall at the start of February 2018. Although the frontline indices saw recovery in the year and were able to touch new high, small cap and mid cap indexes could never recover and has constantly remained below its January 2018 high.

Another graph shows the distribution of falls among different market cap in last one year. We have put it into six brackets. First is share that has fallen more than 25% in last one year, the second bracket has shares that have fallen between 0 and 25 per cent and so on. One can see that large cap stocks are the best performers as 55 (19+36) stocks have given negative return in last one year. The case becomes from bad to worse in case of mid and small cap stocks. In terms of sectors, the worst performers are metal, logistics and infrastructure. The interesting part is that on an average not a single sector has generated positive returns in year 2018; even IT stocks have given average negative return of 19 per cent in last one year. The best sectors in terms of returns were Retailing, Paper and Chemicals.

The basis for the contrarian Investment

Various researches have shown that investors tend to give more importance to the current information and the previous information does not get their due. Hence if a company has reported dip in its earnings in the most current period, chances are high that shares are likely to fall despite a strong fundamental. Moreover, many times, the investor sells because others are selling and get panic. Normally when market overreacts, it follows a large price deviation in one direction followed by large price movement in the opposite direction.

KRBL Limited’s 100 years rich history is the best credential for the Company which is the largest basmati rice exporter with presence in Asia, Middle East, Europe and Africa. The share price of the Company has dropped by more than 50% in last one year ending December 2018. Nonetheless, in last few trading sessions it has recovered part of the losses and is poised to gain further. The company’s diversified product line, high domestic market share (about 36%), export presence in 75 countries, sound financials and emerging opportunities especially in China makes it an interesting value buying. Company’s second quarter result stands testimony to that. It is yet to come out with its third quarter result. For Q2FY19, it has reported strong revenue growth of 74% (Rs1,244.8 crore). Segmentally, revenue from agri-segment jumped 76.6% yoy to Rs1,194 crore with 29.5% yoy growth in EBIT. Contributions from export increased to 51% against 41% same quarter last year. Another better part of the result was sharp fall in the interest cost, which was down by 93% on yearly basis to `0.1 crore. This was primarily due to fall in the overall debt of the company. In last five years, since 2014, the Company has continuously witnessed decline in its debt to equity ratio. It has declined from 1.32x at the end of FY14 to 0.54x at the end of FY18. The profit after tax in second quarter of FY19 increased by 52.2% on yearly basis and remained at Rs157.2 crore.

Dixon Technology Ltd., India’s second-largest player in electronic manufacturing services (EMS) industry with a market share of 9%, has witnessed a sharp fall in its share price in last one year. It was primarily due to adverse market conditions as well as its own deteriorating financial performance. Going ahead, we see financial performance of the company improving. The company manufactures consumer electronics, lighting, mobile phones, home appliances, reverse logistics, security systems which contributed 49%, 26%, 9%, 14%, 1% and 2%, respectively for the quarter ended September 2018. Company’s key customers include Panasonic, Philips, Haier, Gionee, Surya Roshni, Reliance Retail, Intex Technologies, etc. Dixon plans to increase the revenue share of high-margin original design manufacturer (ODM) models as it controls entire manufacturing cycle of a product. The company’s Tirupati unit for LED TVs, CCTVs and DVRs (through a joint venture) will contribute to future growth. Dixon plans to export to Southeast Asian markets, which will be beneficial on account of steeper depreciation of INR v/s SE Asian currencies. Moreover, custom duty hike of 10% on certain consumer goods would lead to higher procurement from India, aiding Dixon’s growth. Moreover, strong order book visibility in TVs, Washing Machines, and CCTV segments will support the revenue growth of company going ahead. Revenue growth along with margin expansion in Lighting, Consumer electronics, and Washing Machine should help the bottom line growth. Improving financial performance along with strong balance sheet (debt to equity ratio at 0.15x at the end of FY18) makes it a perfect comeback candidate.

The share price of Time Technoplast Ltd., which is engaged into manufacturing of polymer packaging products, has witnessed a sharp fall last year. It was due to three main reasons – the general sell-off in the midcaps and small caps universe; the weak set of numbers posted by the Company in Q2FY19 due to higher cost pressure; and finally concerns on promoter stake sales also impacted the share price.

The company’s principal raw material is Polyethylene (HDPE) granules. The company procures this raw material through purchases in the open market or under short-term and long-term supply agreements. The Company is importing majority of its raw materials and balance are purchased from local manufacturer. Time Tech group operates more than 30 production facilities across the globe and is recognized for its innovative plastic products.

Due to hardening of Polymer prices and hardening of crude prices, the polymer prices (including HDPE) had moved to higher band in H1FY19, which impacted the share price of the company. The margins of the company were further impacted because of rupee depreciation and increase in transportation costs due to hike in diesel price. The Company has reported a decline in margins of 210 basis points for Q2FY19. However, polymer prices have started to correct in recent weeks due to easing of crude oil prices. In addition to that several new plants are starting in USA based on the low feed stock cost of Shale gas, which is likely to increase the supply. These factors will help company to improve its margins. Therefore, at current price the stock offer better risk reward ratio going ahead.

DFM Foods is a pioneer in the Indian snack foods market. Company’s Corn Rings and Wheat Puffs are marketed under the CRAX and NATKHAT brand names respectively. The share price of the Company adjusted for corporate action has fallen by almost 50% in last one year. In addition to the weak financials, adverse market conditions impacted the share price performance of the Company. Nevertheless, long term financial performance of the Company has remained quite robust. In last 10 years, the Company has grown at a Compounded Annual Growth Rate (CAGR) of 24.2%; with sales turnover increasing from approximately Rs76.5 crore in 2008-09 to approximately Rs425 crore in the financial year ended March, 2018. The Company is expected to maintain its growth rate with the new Greater NOIDA plant coming on stream, while expanding its distribution channel. The result of the Company for the quarter ended September 2018 has seen a revenue growth of around 11 per cent and profit after tax growth of 8 per cent and the revenue and profit was at `118 crore and Rs7 crore respectively. The most notable fact about the Company’s financial is its higher return ratios. The Company has return on capital employed (ROCE) and return on net worth (RONW) greater than 20 per cent. Company’s products are sold through an extensive distribution network spanning the states of Delhi, Uttar Pradesh, Punjab, Haryana, Uttarakhand, Himachal, J&K, Rajasthan, Madhya Pradesh, Maharashtra and Gujarat.

However, there is a caution – this stock is only for high risk investor and trader.

Yes Bank is India’s fourth largest private sector Bank with one per cent domestic market share. The bank provides a range of services such as Corporate, Retail & SME Banking franchise, with a comprehensive product suite of Financial Markets, Investment Banking, Corporate Finance, Branch Banking, Business and Transaction Banking, and Wealth Management business. One of the reasons why share price of the bank tanked last year was RBI’s reluctance to extend Rana Kapoor’s term. However, the bank has addressed the leadership uncertainty by announcing Ravneet Singh Gill as its next MD & CEO. The bank has posted stable set of numbers in third quarter. Net Interest Income was at Rs2,666 crore against Rs1,889 crore in Q3FY18, which shows a YoY growth of 41%. Total income has grown at only 7% YoY to reach Rs3,557 crore in Q3FY19, which was mainly due to the 37% reduction in fee and other income, on account of 35% YoY reduction in corporate banking fee income due to rebalanced sequential growth in corporate advances and on account of treasury losses. The provisions increased 31% YoY to Rs550 crore. Net Profit for Q3FY19 was at Rs1,002 crore as against Rs965 crore in Q3FY18, which shows a growth of only 4%, which can be attributed to the reduced other income and increase in provisions. Bank’s asset quality also declined in the recent quarter due to impact from IL&FS exposure of Rs2530 crore. We believe, worst is behind and the bank will see improvement in its performance with new management at the helm.