Obscene inequality is the most worrying trend 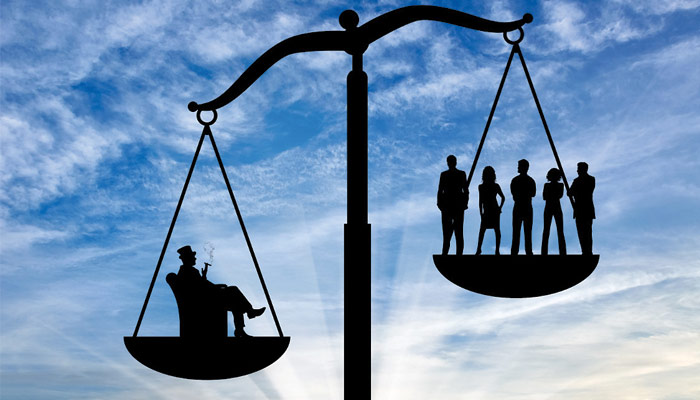 India is one of the most unequal countries in the world with the top 10% controlling 55% of the total wealth, up from 31% in 1980, according to the 2018 World Inequality Report. Another report by Oxfam revealed that a mere 1 per cent of population of more than 1.3 billion holds more than half the country’s wealth. According to the report, 10% of India’s population controls 77.4% of the country’s national wealth, and the wealth of the top 1 per cent in 2018 had increased by 39%. The wealth increase for the majority of Indians was just 3%. The Oxfam analysis said that in India 18 new dollar billionaires had emerged in 2018.

Oxfam’s report released in 2016 said: “The richest 1 percent now have more wealth than the rest of the world combined.” Another recent report says “Eighty-two percent of the wealth generated in 2017 went to the richest one percent of the global population.” And in 2018, “the wealth of the world’s billionaires increased… $2.5 billion a day.” There are 2,202 billionaires, so if that were divided equally among them, they would each be gaining $1,132,246 every day of last year. However, “the poorest half of humanity saw their wealth dwindle by 11 percent, billionaires’ riches increased by 12 percent.”

According to a paper released by the World Inequality Database (‘Wealth Inequality, Class and Caste in India, 1961-2012’ published in November 2018), although India’s upper caste households earned nearly 47% more than the national average annual household income, the top 10% within these castes owned 60% of the wealth within the group in 2012. Further, the wealthiest 1% among them grew their wealth by nearly 16 percentage points to 29.4% over the decade to 2012. Not only is the wealth and income gap large, it is growing across all castes, in the 36 years till 2016. SC and ST households earn 21% and 34%, respectively, less than the national average. OBC households fare better but still earn 8% less than the annual Indian average. The National Family Health Survey 2015-16 showed that 45.9% of ST population was in the lowest wealth bracket compared to 26.6% of SC population, 18.3% of OBCs, 9.7% of other castes and 25.3% of those whose caste is unknown. Muslims reported an annual household income 7% less than the national average.

The above figures may look very contradictory to each other but there is no denying the fact that the financial disparity between India’s rich and poor has been growing exponentially, adversely impacting fundamental rights and societal equilibrium. It is a shame for the system as well as for the leaders proclaiming equality and winning votes. It is also morally outrageous that the few wealthy individuals are amassing wealth, while the poor continued to struggle to secure their next meal. The impact of wealth is not limited to certain life standard but as the Oxfam report indicates “the life expectancy of a low-caste woman is almost 15 years less than that of a woman belonging to the upper caste.”

The report reveals that the combined federal and provincial budget for public health, sanitation and water supply was less than the wealth of the country’s richest man Mukesh Ambani. According to the Oxfam report, in India concentration of wealth is higher with 9 men owning more wealth than 50% of population. Globally also the situation is not different as the report says that 26 individuals have more wealth than the bottom 50% of the global population. Globally, the number of billionaires has doubled since the financial crisis.

All this data reflects that inequality is growing dramatically leading to obscene and frightening levels of inequality. Inequality leads to uneven developmental outcomes. Inequality also has a negative impact on solidarity within the community. Already inequality and concentration of wealth has led to crony capitalism, which has distorted India’s democracy.

The Finance Minister should have read these reports before giving a final shape to the budget. While relaxing the tax structure for the middle class he should have taxed richest 1 per cent to pay extra tax on their wealth and assets. The growing resentment is a clear signal that the entire moral edifice of Indian society will collapse if it does not confront the question of inequality. It is one of the biggest challenges of our times.