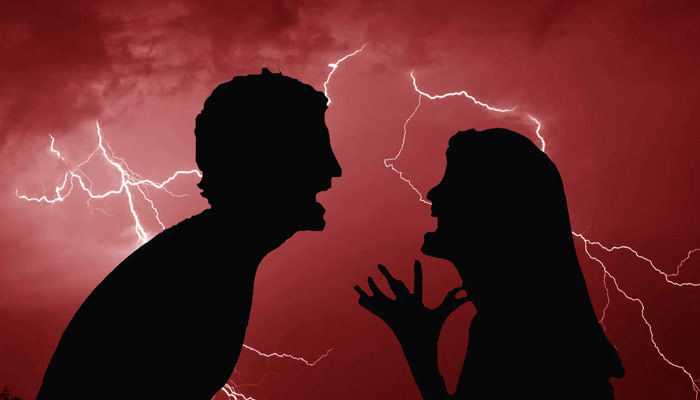 Have you ever quarreled with your spouse, dear Reader? If not yet, try at least now. You will soon learn that these little quarrels often prove to be new recruits of love. I for one wait for an opportunity and when I find one I jump at it. My wife is no Buddhist to say: “He who angers you conquers you”. She too flares up. It starts with exchange of very powerful words and ends with a battle of books and kitchen utensils. Poor books! In their mission they lose their face and shape, and also fail to hit the crafty target for my wife was a sports star both in school and college. A champion at javelin throw, no wonder her aims are accurate. Like a wounded soldier I go semi-conscious till food-time.

Hunger knows no ego. Those powerful words hurled at each other go meaningless now and so love resurrects. It is love after the battle and so it emerges with a renewed vigour. I don’t say ‘sorry’ to my wife but simply smile. Every smile is capable of disarming an enemy. She does not smile back. She gives a hundred and odd reasons for being cross with me, while she serves me food. “Food doesn’t taste good if it is not served with love”, I say and add a new quote or a joke every time. The soul of every woman lives in love. My wife smiles and truce follows. A hug, a kiss…He…ho! Problem is over.

A loving spouse is very possessive, for strange are the ways of love. And it is this possessiveness that asks a hundred and odd questions before the truce. Tamil Literature that glorifies love and war speaks a lot about such quarrels.

A wife who is truly in love with her husband is more considerate in affairs of love than man. But she does it with feigned anger, thereby putting him into lot of inconveniences. Testing times! Ha..ha…testing times! And it is up to the husband to bear with a grin.

A newly married couple (in those days there were no gay marriages) went for an outing. Young women, both married and yet to be married off, ogled at the well-built husband and the possessive wife watched their reactions through the corner of her eyes, all the time brewing with jealousy.

No sooner did they enter their house, the husband dragged her for a kiss behind the bolted door. She became very furious and shouted: “Oh, you…you…you! Many women raped you with their eyes. How can I ever forget all that? Go away. I will not speak to you any more”. He stood stunned. He attempted to convince her but no word came out for an unexpected sneeze elbowed its way. She looked daggers at him. “Huff, what is this sneeze for? You think that I would break my silence to tell you ‘God bless you’, eh?” Another sneeze found its way out. “Hei! Again? Who is that wench thinking of you?” She abused him. Meanwhile the third one was signaling to come out and he tried to stifle it. Noticing his attempt, she shouted, “Come on…open your mouth and confess. Who is this other bitch wallowing in your memory?”

Women look more beautiful when they are angry. He started gazing at her, part by part. “What the hell! Are you comparing my gifts of nature with any other woman of your choice? Whose shapely nose reminds you mine? Whose charming eyes resemble mine?” The husband woke up to the situation and said: “You are the one and only sweetheart I have in this life”. She retorted: “I see! You mean you will find some other sweetheart in your next life!” The fellow lost hope. He said “This language is unwarranted of you. I always think about you and you only”. “Oh, yes…yes. I know. In my presence you think of me…In my absence?”

He gasped for breath and cursed his fate. He vehemently patted his forehead as a mark of disappointment. She understood that it was too much on her part to tease him further. She decided not to take him for a ride. Seconds later when he was seriously looking at her, not sure of what was brewing in her mind, she smiled…a smile that angels too might envy. Pouncing at the opportunity he grinned … a grin that sheep too might envy. He understood that she was very possessive and that was good for a hubby. Peace got restored.