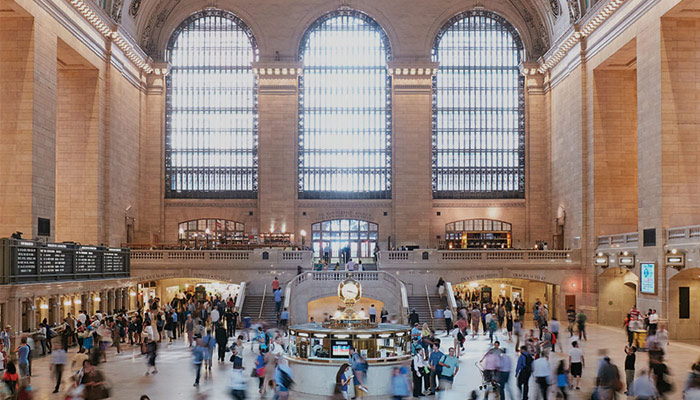 Julian Green, an American novelist and diarist, the first non-French national to be elected to the Academie francaise, years ago wrote, “There is scarcely a corner of Paris that is not haunted with memories for me.” And so it is for me with New York, the city of my birth, childhood and adult life. When you have lived in a city a long time, its fabric becomes a part of your life: the streets, parks, bridges, buildings.

Grand Central Terminal forms an important part of my life. At age ten, it was the starting point for my first journey outside the city – the beginning of my travels, both domestic and international. How well I remember the four of us, mother, my sister Elinor, my dog and me, stuffed in a cab with our luggage, proceeding south along Park Avenue. At 43rd Street and Vanderbilt Avenue, the cab pulled into the driveway at the West entrance of the terminal. A porter took our bags and led us into the terminal. From the grand staircase, I looked upon the magnificent main concourse, much of it sheathed in marble, extending, as I later came to learn, 375 feet in length and 120 feet wide, rising to a height of 125 feet. Shafts of sunlight streamed through ceiling windows to rest upon the concourse floor. We follow the porter to the circular information booth in the center of the main concourse. Mother inquires as to the track number for the New York Central train to Chicago. Thus begins an adventurous 3000-mile train trip across the United States to San Francisco. My country is about to expand dramatically for me, from 305 square miles, the area covered by New York City, to a continent. Our destination: Mills College in Oakland, California, where mother would be teaching international relations at the summer school.

As may now be apparent, I have a fondness for train stations. A favorite is Victoria Terminus – “V.T.” to Mumbai residents – providing local and long distance service for the Central Railway. Built in 1888, a quarter century before Grand Central Terminal, it is a magnificent Gothic structure. About 1000 trains, carrying two million passengers, arrive and depart daily. “V.T.” teems with life. On a visit to the station years ago, I jot-down in my notebook the names of trains: the Hyderabad Express, the Firozepur Punjab Mail, the Calcutta Express, the Madras Mail, the Bangalore Post, the Deccan Queen departing for Poona. I love the names of these trains.

Another train station I feel affection for is Venezia S.L. (Santa Lucia), the station for Venice, occupying the former site of the Palladian Church of Santa Lucia. I enjoy visiting the Venice train station in the early evening when many of the international trains depart. One evening at the station I come upon a train with cars bound for Wien (Vienna), Zagreb and Budapest. The front two cars, each bearing a hammer and sickle emblem, have as their destinations, Kiev and Moskwa (Moscow). The Moscow passengers will arrive about two days later. From the platform, I wave to the hardy souls traveling in these cars as the train departs. Hardy travelers have been departing from Venice for the East for centuries. Think of Marco Polo in 1271 who went by ship, horse, camel and any other means available as he journeyed from Venice to China. It took him 3 1/2 years.

During my four years at Harvard College, I passed through Grand Central Terminal numerous times, traveling on trains to and from Boston with splendid names such as the Merchants’ Limited, Yankee Clipper and Mayflower. The terminal made each departure and returns a treat. It is the grand gateway to New York City. Unfortunately, Boston trains now depart from Pennsylvania Station, once a masterpiece, now no more than a hole in the ground on the West Side of Manhattan. It was destroyed in the early 1960s – an act of vandalism by public officials. Whenever I have the misfortune to pass through there, I feel my blood pressure surge. The same horrific fate could have befallen Grand Central Terminal, but it benefitted from a protective landmark status.

One summer day, I gather my chicks – in the form of 20 young boys and a raccoon – by the information booth on the main concourse. It is my job to take them on an overnight train to a camp in Maine. One by one the boys arrive at the terminal with their parents, some robust, ready for a summer of adventure, others subdued, already homesick, even before parting from their parents. I lead them across the concourse and through a gate onto a train platform. The camp had reserved a sleeper car for us, but little in the way of sleep transpired, with boys and raccoon running up and down the aisle much of the night. At 6 a.m., now a disheveled, exhausted group, we disembark at the Belgrade, Maine, station. All chicks, plus raccoon, accounted for.

In the 1980s, my relationship with Grand Central Terminal changed from occasional visitor and traveler to volunteer. I worked in a Coalition for the Homeless evening project to provide food to homeless New Yorkers who had sought refuge here during a bitterly cold winter. My colleagues and I fanned out across the terminal distributing food. Human misery in the midst of architectural splendor. The beneficiaries nodded silently in appreciation. Conversation tends to be brief in such encounters. Some people had taken refuge in telephone booths, huddled next to silent phones. I tap on the glass gently. A head rises, the folding door is opened a crack and a hand extended to take food. In the main waiting room, the wooden benches were crowded with homeless, hungry people. They gathered around us as we distributed food. A pregnant woman asked for several extra containers of milk. We oblige. A man lay on a bench, his trousers pulled up, and revealing badly swollen, blackened legs. Food is placed by his side.

In another hour or so, when the terminal closes at midnight, these New Yorkers will pick themselves off the concourse floor, leave the telephone booths and relinquish the benches. Some may go to city shelters for the remainder of the night. Others, depending on the temperature, may seek out a doorway to await the arrival of dawn.

My most dramatic encounter with Grand Central Terminal was through its poor relation, Grand Central Station, the name of the subway station located beneath the terminal. I lay stretched out on a platform, having fainted on a downtown Lexington Avenue local train arriving from 51st Street. Standing over me are police and Emergency Medical Services staff. By the simple act of fainting, I have managed to bring the downtown East Side subway system to a halt, resulting in tens of thousands of New Yorkers being late to work.

I am placed in a wheelchair, carried up the stairs and taken to an ambulance waiting on the street. Through the window of the ambulance door, as we travel to New York University Hospital, with siren blaring, I see the southern facade of Grand Central Terminal, with its clock and arched windows, crowned by the messenger Mercury, with his broad brim traveling hat, winged sandals and staff received from Apollo himself. The doctors pronounce my fainting a “fluke” – my medical dictionary contains no definition of the word – but they want me to spend the night at the hospital. I decline, politely thank them and depart.

In recent years, my encounters with Grand Central Terminal have been far less dramatic. I walk through the terminal several times each week, often going out of my way to do so, because I find being there gives me such pleasure. At the terminal, I gaze at the sky ceiling, not light years away, but a mere 125 feet above the concourse. Depicted are the daytime and night time winter and spring sky. Ten constellations appear. These are my stars. I don’t mind that their proper order is mistakingly reversed. And above me, the winged horse Pegasus dwells as a constellation, an inspiration to every writer who passes beneath. (On my key chain, I carry a depiction of Pegasus given to me years ago by a transit official.) Astronomers may shake their heads in dismay, but I enjoy the stars and sky I find in Grand Central Terminal.