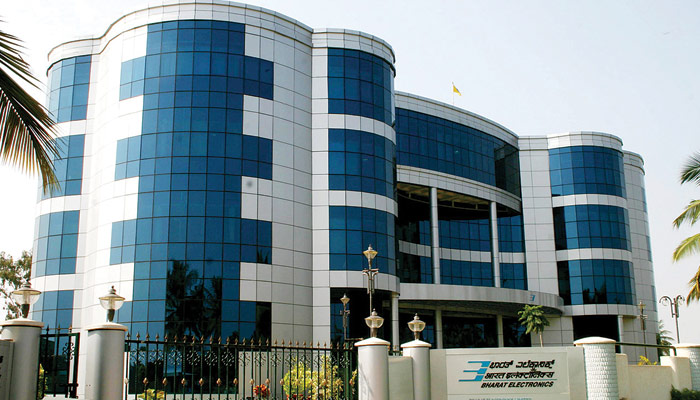 Incorporated in 1954, the Bengaluru based Defence: The Union Budget has allocated Rs27,9305 crore for 2018-19 for defence, with an increase of 7.7% over the previous year. The budget for Capital Expenditure has increased from Rs86,488 crore in 2017-18 to Rs93,982 crore which is about 9% hike over the previous year. The government is also planning to establish two defence industrial production corridors, one between Chennai & Bengaluru and other in Bundelkhand region which is between Uttar Pradesh and Madhya Pradesh. With an investment of Rs20,000 crore, it is expected to generate employment for 2.5 lakh people. Defence & Aerospace has been identified as one of the ten ‘Champion Sectors’ under the Make in India version 2.0, for renewed focus because of its potential to drive double digit growth in manufacturing, generate significant employment opportunities and become a global player. Apart from its core defence business, BEL has diversified into other sectors like Homeland Security, Solar, Space, Cyber security etc. The company was able to make progress in the areas of Homeland Security, Solar, etc and BEL is planning to enter into new business areas like Unmanned Systems, Composites, Sonobuoys after assessment of market opportunities.

Homeland Security and Smart City: The Homeland Security market in India is spread across Central, State Governments and Private sectors. The major segments of Homeland security are Critical Infrastructure Protection, Paramilitary, Police & Urban Area Security, Ground Transportation, Port & Maritime Security etc. Border Security Management is one of the major opportunities available in the Homeland Security segment, which include border management solutions required along the India-Pakistan, India Bangladesh borders, etc. BEL is planning to address the Border Management Solution requirements as part of the Homeland Security business. The Smart City mission was launched by the government in June 2015 covering 100 cities in 5 years. Major segments in Smart City business include Smart Security, Smart Governance, Smart Mobility, Smart Energy, Smart Healthcare, Smart Infrastructures & Buildings etc. Smart City Mission, under which the ministry has announced 99 smart cities with central assistance, received allocation of Rs6169 crore for 2018-19, with a hike of 54% in comparison to previous year. BEL formed a micro Strategic Business Unit to address the Homeland Security and Smart city business during the year. The SBU was able to win some significant orders in the Smart City segment during the year.

Solar: The government has set an ambitious target of generating 175 GW power by 2022 from renewable energy sources like Solar, Wind and others with the target for solar energy as 100 GW. BEL has upgraded its PV solar facilities to 10 MW mono crystalline solar cells and 10 MW automated Solar Module manufacturing and has taken up the setting of megawatt size solar power plants. The new automated Module plant at BEL manufactures solar modules up to 320 watts in both 60 & 72 cells configuration. The modules are qualified for IEC certification as per guidelines of MNRE for application in roof top and utility scale solar power plants. BEL is setting up utility scale solar power plants for captive consumption in the estates of Ordnance Factories at 17 locations spread across 8 states for a total capacity of 150 MW. The first solar power plant of 15 MW capacity has been commissioned at Ordnance Factory, Medak and the plant has started feeding power to the grid. Also plants of 7.5 MW capacity at Badmal, Boulanger district of Orissa and 10 MW plant at Itarsi have been setup and will be synchronized with the grid shortly. Two more solar plants 10 MW and 6 MW each at OF Jabalpur and HVF Avadi respectively are at various stage of commissioning. In near future this sector is expected to contribute significantly to the BEL’s business. BEL has also been shortlisted by ISRO for manufacturing of Multi Junction Solar Cells for space application. The capacity of the plant will be about 60,000 cells per annum.

ISRO: ISRO has launched around 60 missions in last five years and is planning to increase the number of missions with an average of 12-18 launches per annum from year 2018-19 onwards. ISRO also got the opportunity for launch of 100 foreign satellites per annum, on an average, in the last 3 years. BEL has established itself as a major player in the ground segment of satellite communication and wishes to enter into the space segment with a long term objective of becoming a prominent player in space based assets and payloads. Recently, BEL has been selected as a partner of ISRO for satellite assembly, integration and testing. BEL is also exploring collaboration with ISRO, leveraging their technological capabilities in design and development of various products/ systems like GSAT Terminals, NavIC Rx, Hubsetc in the Space sector for possible use in defence and paramilitary applications. It has an order book Rs48,402 crore as on 1st January 2019, which is almost 5 times its FY18 revenue and provides strong revenue visibility. At CMP of Rs91, BEL trades at PE ratio of 12x. Based on above performance parameters, the BEL share looks quite attractive at the current level and investors can accumulate this share between Rs90-85 with a stop loss of Rs74 for an upper target of Rs130-140 in next 6-8 months and Rs190-200 in next 18-24 months.

Presently, India is the largest importer of defence equipment with many of its defence needs met through imports. The Government of India’s visionis to develop a strong self-reliant domestic industry in the defence sector with substantial participation from Private sector including MSMEs and Start-ups to reverse the trend of imports. In this regard, the Government has taken several initiatives to enable this vision like the “Make in India” program, creation of an eco-system for development of technologies through innovation by MSMEs / Start-ups, etc. With this support, the industryis expected to move up in the value chain and deliver quality products, systems and services to the defence forces. MoD has introduced the Strategic Partnership model (SP) for the Indian private sector, as part of DPP2016. SPs will be selected initially in 4 segments viz. Fighter Aircraft, Helicopters, Submarines and Armoured fighting vehicles (AFV) /  Main BattleTanks (MBT). The Strategic Partner would tie up with global OEMs to seek technology transfers to set up domestic manufacturing infrastructure and supply chains for major systems. The model aims to progressively build indigenous capabilities in the private sector to design, develop and manufacture identified platforms. Government is planning to further increase the FDI limits from the present 49% under automatic route, to encourage increased participation of foreign OEMs to set up facilities in India.