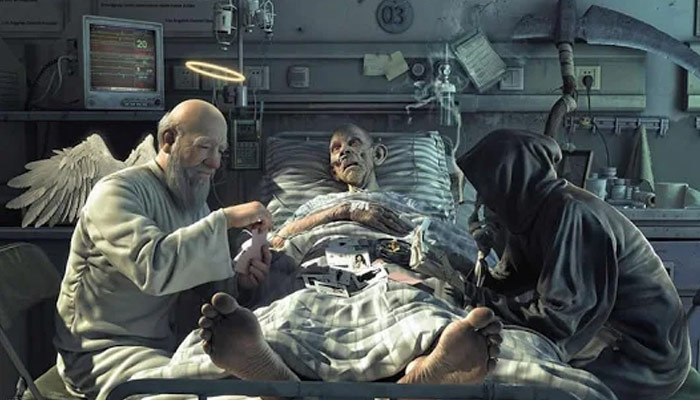 Long long ago, nobody knows how long ago, my mom began and that was how she began every folktaleshe heard from the oldies and stored them all in her skull perhaps for me…there lived a lock, quite strong as a bull. A hammer as strong as a lion wanted to open it. He used his strength to open the lock but failed. He didn’t lose hope. He went on hammering at the lock but it was of no avail. Bang…bang…bang…he went on but the sturdy iron hearted lock kept her cool. A key that was just looking at the desperately rude hammer and the death-defying and devil-may-care lock, laughed and laughed at the helpless hammer.

Losing no second the key addressed the hammer: “Revered Sir! Why don’t you give me the chance of opening the lock?” The lion-hearted hammer pooh-poohed at the key before he roared: “You! You are lean, lanky and light. Yet you are ambitious. With all the power bestowed on me, I still struggle. What can an easily bendable and breakable poor fellow like you do with the lock? Go away and do not waste my time.” But when the key insisted that he would like to try the lock, the hammer unwillingly said: “Try and fail”.

Jumping at the good moment the key took a forward step and in no second opened the lock. The hammer looked askance at the key before he said: “What a magic touch is that? Preposterous! Yet tell me how you did it?’ The key gave the kind of smile a victorious boxer gives the loser and said: “Oh, you ego-centric hammer! You went on hitting at the head of the lock. Remember nobody is ego free. And so the lock cared a hay for you. But you missed seeing what I have done. I simply touched her heart and she opened. This is the way of the world”

Wow! What a message! Touch the heart and it opens up for you so that you can see the auricles and ventricles easily. Believe me… the heart-touched person becomes transparent. Then there arises the question: How to touch the heart of a person?

It is like opening the third eye. All of us open our third eye like Lord Siva and burn people alive now and then when we are sure that they will not burn us back. But that is not the eye that I am referring to. You will understand this concept better if you have read Lobsang Rampa’s The Third Eye. It is the eye of wisdom and it can never be opened with a chisel and a mallet. You need to go deep down into your mind and like a pearl fisher you can be sure of the pearls of wisdom embedded there. Fish for it.

This concept leads to another question: How to fish for it? Well! You can do it when you learn that it is a way of life. All that you have to do is to see with your heart. Does this line sound like Pre-Raphaelite poetry? If I get a yes, then I am certainly a poet. Remember, my dear readers, the third eye is only our heart. Heartless people are cursed only with two eyes. And the blessed ones realize that the heart is not only a pumping station but also a reservoir of love, an overflowing one at that. But this realization takes a long time and very much depends on the growth of one’s mind. A reading of any biography of Alexander, the Great, especially the last few days of that noble warrior would be a spectacular testimony to the great humanitarian’s realization.

“Fulfill my last three wishes after my death,” Alexander commanded his Lieutenants, who stood near his deathbed with all ears. “Firstly I want my physicians to carry my coffin to the graveyard. Secondly the path to my grave should be strewn with gold, silver and precious stones. Lastly my hands should be dangling out of my coffin.” The Emperor’s men were taken aback at his last wishes. And so they said, “We will fulfill your last wishes, Your Majesty! But please let us know the significance of your wishes.”

The realized soul explicated thus: “I want my physicians to carry my coffin because the world should know that at the face of Death, the leveler, even the best of physicians are helpless. I want the path to the grave to be strewn with wealth because the world should know none of the things I considered precious all these years will ever accompany me and that I have to leave behind everything I have struggled to gather. And I want my hands to dangle out of my coffin because I want to tell the world that empty handed we come and with empty hands we have to leave.”

Oh, that reminds me of an adorable line from Omar Khayyam: “We came like water and like wind we go.” Great minds think alike, they say. And the poet who wrote the epitaph on Alexander’s grave was also a realized soul when he penned: “Here this tomb suffices the man for whom the whole world was not sufficient”.