The Road to Harvard 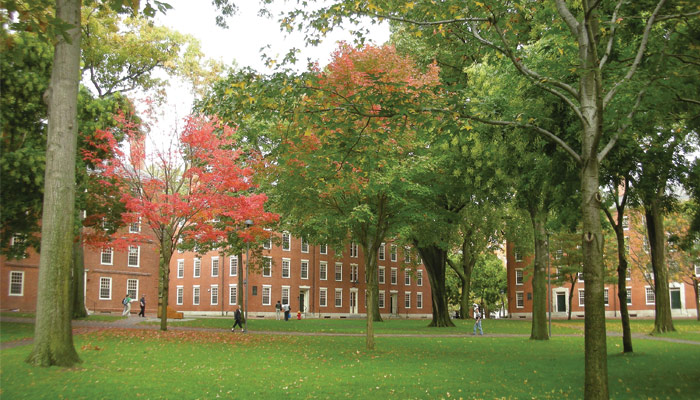 The road to Harvard College was a bumpy one for me. My impending 60th college reunion evokes pre-college memories. The arithmetic suggests that I may be getting old.

At Collegiate School, the high school I attended in New York City, probably the oldest school in North America, having been founded in 1628, three years following the Dutch founding of New Amsterdam, later to become New York City, reflecting in the school’s name the founders’ religion- Dutch Reform Collegiate Church -I held undisputed claim in the senior class academic ranking to position 17 in a class numbering 21 boys. Not promising college material.

It was believed by some, however, that I possessed other than academic attributes. For example, at the request of no one, I had prepared a lengthy report on reorganizing the school. A bold undertaking by a 10th grader. My classmates were hugely amused and the school administrators charitable about the unsolicited recommendations.

The only casualty of the affair was Henry Adams, a wonderful teacher of English literature who had made books, among them, Thomas Wolfe’s novel, Look Homeward Angel, come alive for me in a way I had never before experienced. His anguish arose from the many spelling mistakes in the report. Why hadn’t I shown it to him before distribution? Each misspelled word he considered a blot on his reputation. (Decades later, a search of the school archives, undertaken at my request, failed to find a copy of my report, leading me to believe that it had been tossed out by an unsympathetic reader. Unfortunately, I did not retain a copy and do not remember my recommendations.)

In another initiative, I introduced soccer to the school, having previously played the game for eight years before arriving at Collegiate at the elementary school I attended in New York, founded by two English masters who had met on a soccer field in England years earlier, one having knocked the other down. This was a major contribution, soccer being such a wonderful game, but little played in the United States in the 1940s.I had met with Mr Parkhill, the headmaster of the school, in his office to make the proposal. He agreed to do so, to the dismay of the coach of the six man football (American-style) team. Soccer remains a hugely popular sport at the school. Another non-academic achievement: Captain of the basketball team. Indeed, in my senior year, the basketball coach at Columbia invited me up to the college to try to persuade me to attend Columbia and play on the team. All of the above hinted at leadership skills that added a glow to a dismal academic record.

Each senior met with Mr Parkhill to discuss college aspirations. The headmaster stood about six-and-a-half-feet tall, but because of his personal warmth, we, his students, never found him intimidating. I told him I wanted very much to go to Harvard and could not imagine myself being happy at any other place. Harvard was in an urban setting – Cambridge, Massachusetts, with Boston nearby. I am an urban person. I hated my one year at a country boarding school and had run away. My family ties to Harvard were strong. Father had attended the law school; mother, Radcliffe College, where she graduated with highest honors, and my sister, Elinor, at the time was attending Radcliffe. All true, but there were far more talented boys in the class.

Mr Parkhill indicated that, given my grades, this request would present him with a considerable task, but he would do his best. (Dear Reader, these events occurred in the tranquil 1950s, when close relations existed between school headmasters and college deans of admissions. Now, with my grades, I would be advised to consider only “safe schools.”  Thank goodness, the term had not yet been invented.) Mr Parkhill performed admirably. I was admitted to Harvard as a “late bloomer.” I hope the category still exists.

Each resolution brings forth a new problem. What was to become of my dog, Penny, if I left New York to go to college? At home, I was Penny’s sole caretaker. I fed and walked her. Together, during elevator operator strikes, to reach the street, she and I walked down 16 flights of stairs and then up them, to return to the apartment. She slept on my bed. Again, I asked Mr Parkhill to intercede, feeling confident that he would help. He owned two dachshunds. We had conversed on the irresistible appeal of dogs. Mr Parkhill took this assignment on with more enthusiasm than the first.

But success was to elude us. The Harvard dean of admissions informed Mr Parkhill, in essence, Dean yes, his dog, no. The choice became Penny or Harvard. I chose the latter, but not without anguish. I found a home for Penny with a store owner at Point O’Woods on Fire Island. There being no cars on the island, she could run to her heart’s content. But at college I missed her. The first month there, when I should have been applying myself to course work, I spent a huge amount of time trying to find a home for Penny in Cambridge.

Eventually a telephone operator at the college agreed to take her. I sent a letter to the store owner informing him that I would be arriving to reclaim my dog. He wrote me a sensible letter saying, of course I could have Penny back, but questioning whether the plan made any sense. In actual fact, it made no sense whatever. Sanity prevailed at the last moment. In the Cambridge post office I held in my hand a sealed, stamped envelope containing my letter to collect Penny, but I never mailed it. Penny remained with her new master and I buckled-down to my studies and immersion into a new stage of my life. This may have been the moment when I advanced from teenager to young adult.

Before my arrival at college, mother and the mother of the high school class valedictorian, held a secret meeting. Both Ted and I had been accepted at Harvard. Our mothers, without consulting us, decided we should be roommates at college, in the hope that Ted, an excellent student, would inspire me on the academic front by his example, and that I, who was anything but shy, would encourage him to be more outgoing. I am not certain of the impact we had on each other, but we remained roommates for four years and I look forward to seeing Ted at our 60th reunion.

The summer before starting college, I made the goofy decision to purchase a broken-down convertible for $60.Therewas no insurance on the vehicle and I was driving in Massachusetts with Pennsylvania license plates using a New York State driver’s license. While not a lawyer at this time, I sensed that the arrangement might land me in prison. Naturally, I wanted to show my acquisition off to future classmates by arriving at Harvard in the convertible, but in Cambridge, I could not find Harvard. In desperation, I pulled into a gas station to ask for directions and fuel up. “A dollar of gas, please,” I said to the attendant who was about my age. I timidly asked him, “Where is Harvard College?” With contempt on his face, thinking, what a knuckle head this guy must be, he said, “Try turning around.” I did so and there it was. Thus began my four years of learning at Harvard College.