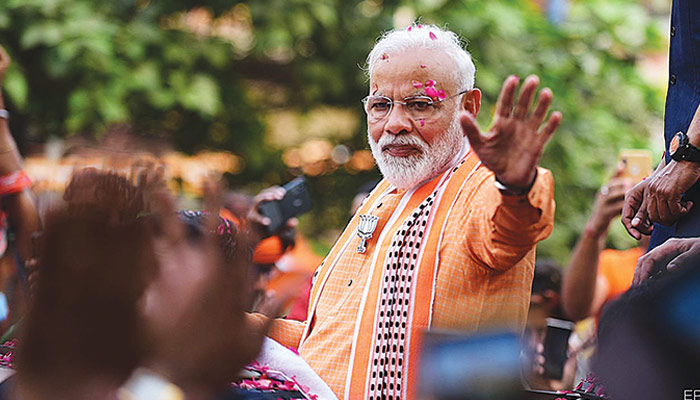 The confidence of winning of a second term shown by the Prime Minister during election campaign was at times too irritating to some. But he really has come with an unprecedented mandate not imagined by his own party functionaries and followers.

Verdict 2019 clearly spells that this was a national election, fought across the country around Mr Narendra Modi, who ruled the country for five years. Although there were lots of critical but very bold reforms which brought along equal number of discomforting moments for every citizen like demonetization and GST, yet they have overwhelmingly affirmed his rule. The verdict says it all – that irrespective of caste and creed, rich and poor, rural and urban, people have really invited him to continue to rule; gave him a blanket mandate to let him decide and act whatever he feels good for the nation. This is indeed unprecedented. Now his critics will certainly compare this to the previous mandates right from 1952. But the euphoria was different those days. Like the first one which Nehru got, but that had nothing to do with charisma of Nehru, it was the celebration of the first election. In 1952, Congress had won 364 out of 489 Lok Sabha seats and the CPI was the second party with just 16 seats. Even the much revered leader BR Ambedkar was defeated from Bombay constituency.

We can take a walk down the history’s lane to understand the undercurrent – In 1957 elections again Congress had won 371 and the CPI was the second party with 27 seats. In 1962, Congress made a hat-trick by winning 361 and CPI continued to be at number two with 29. In 1967 Congress won 283 seats (well the number of seats in Lok Sabha was increased to 520) and in 1971, in the first mid-term election in the history of independent India Congress won 352 seats riding on Garibi Hatao campaign. After that it was free for all. In 1977, Janata Alliance formed the government after winning 345 out of 542 seats. In 1980 Indira Gandhi returned with 353 seats. In 1984 elections Congress rode a massive sympathy vote to finish with 415 seats, the highest ever. BJP became the largest party in 1996 elections with 161 seats, in 1998 elections with 182 seats, and in 1999 elections with 182 seats. In 2004 elections Congress won just 145 seats; while the BJP won 138 seats.

The above numbers had different reasons. Not most of them are prevailing now. All the previous elections till 2014 had a specific formula, a mathematics that all the political parties found in their favour. It was all created and some had evolved with time due to massive intellectual impotency the country has.

The 2019 verdict is different from all the previous elections because people voted to a man who has brought at least some change in their life. They were mesmerized to see the change and often questioned that if it was possible why it did not happen earlier? Whether it is availability of electricity, cooking gas, toilets, housing subsidies, better roads without any tax collection barriers, a collateral-free loan, free medicare scheme, one rank one pension, triple talaq – just imagine an Indian male or female and you will have at least one scheme that has made his life easier, and that too without any discrimination.

And foremost this verdict will be remembered for breaching the caste vote banks of almost all political parties. Although the shrinking of the Opposition is a worrisome factor in a Parliamentarian democracy but in hindsight we know they had no vision for the country. Opposition also created the enabling environment for Modi’s victory who successfully dismantled their caste arithmetic and core support groups. Regional parties who have shrunk into family fiefs like RJD, SP and BSP had nothing to offer. People have understood their distorted version of secularism that alienates the majority.

In times of an economic downturn, and rampant unemployment the campaign was focused on national security, India’s stature abroad, Ujjwala yojana, building toilets and Swachch Bharat, Jan Dhan accounts for all and `2,000 sent into them under PM-Kisan. Surprisingly the benefits were too many that they forgot the pain brought by demonetization. However, the Indian economy has become a major cause of concern for the new government. The numbers are not encouraging. According to NSSO the GDP dropped to 5.8 per cent in the last quarter of the 2018-19 and overall GDP for last financial year has been estimated at 6.8 per cent against a target of 7.2 per cent. GDP growth figure has depicted a loss of momentum and slowing consumption story and subdued growth in exports are expected to keep the country’s growth rate under pressure in the months to come.

And the team Modi has no time for celebration.