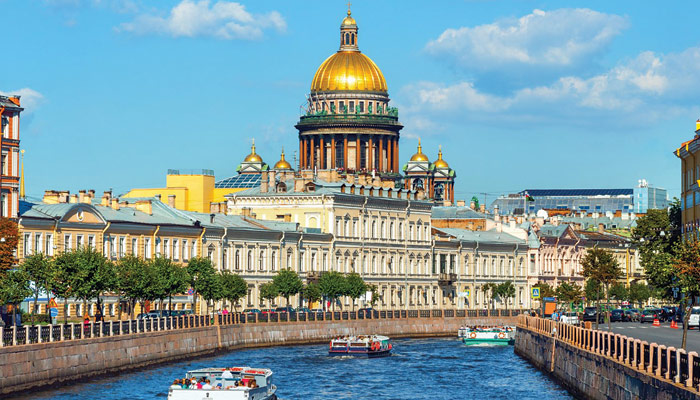 At my 60th Harvard Class Reunion, I break away for a few hours from a heavy schedule of reunion activities to visit the Schlesinger Library on the History of Women to read some of mother’s papers donated to Radcliffe College by my sister, Elinor, and me, following mother’s death.

While seated at a library table as file boxes are brought to me by a staff member, I think of mother’s remarkable life and career, much of it already known to me, but with my knowledge about to be enhanced, as I prepare to read her personal notes for a planned autobiography, never undertaken, to have been called, “Proud to Live in Our Times.” I do so on an important anniversary date in her life. 2019 marks the 100th anniversary of mother’s arrival in the United States, having come by herself in 1919 at age 16 as a refugee of the Russian Revolution.

A word first about mother’s father. He, too, had arrived in the United States from Russia, in his case at age 17, but not speaking a word of English. He traveled throughout the country during his eight year stay, learning English so well that he became a courtroom stenographer. Upon his return to Russia in 1896, his knowledge of English, and of the business ways of Anglo-Saxons, enabled grandfather to effectively represent major British and American companies in pre-revolutionary Russia, among them the Gillette Safety Razor Company. He created a prosperous life for his family, much assisted by grandmother who was German-born.

Mother was born in St. Petersburg in 1903. In 1917, Russia was at war with Germany and in the midst of revolution. Grandfather decided to move the family to the safety of his summer house on the Gulf of Finland. The harsh realities of civil war reached Finland all too soon. The house shook to its foundations as Reds and Whites exchanged artillery fire. Grandmother, ever resourceful, hid food from marauding soldiers in the house-high snow in the garden and concealed money and jewelry in flowerpots.

Grandfather decided that mother’s further education, she being the eldest of the three children, could not proceed under such conditions, and so he arranged to send her to the United States where his business colleagues could assist her.

Mother arrived in Boston in the autumn of 1919, having traveled alone by ship from Copenhagen. William Nickerson, a Gillette executive, arranged to have the company pay mother’s college expenses, her father having served the company well by introducing the Gillette razor into the Russian army. Mother was overjoyed. Her enthusiasm, however, was not shared by Radcliffe College. She had no documents to establish her academic credentials, having received instruction from tutors at home in St. Petersburg. Actually, she had had a superb education in Russia, becoming, as Nabokov said of himself, a perfectly normal trilingual child, her three languages being Russian, French and English. Radcliffe relented. After four years of intense study, Vera Micheles graduated from Radcliffe College with highest honors – summa cum laude – in the field of political science. Mother always remembered this generous decision. Decades later, she dedicated her book, “Foreign Policy Without Fear,” to Mr. Nickerson, in her words, “one of the best Americans who by making me the gift of an American education taught me the best of America.” (From college, she went to Yale for her master’s degree and returned to Harvard – Radcliffe for her doctorate.)

Mother was much praised and honored for her achievements, but as I learn from notes for her autobiography, she had been deeply unhappy during her college years. To be uprooted from one’s native land leaves deep scars. From her notes:

Alone in a hospitable, but strange land, torn away from the moorings of family life and accustomed surroundings, I suffered profoundly from an inner loneliness even while surrounded by colleagues and fellow-students – the kind of loneliness which is particularly poignant in youth, which is the time for love, but also the time for despair.

Brilliant, yes, but she was bereft of childhood friends. She had lost her city, a magical place of canals, bridges and palaces. She had lost her homeland and the opportunity, living as she was in an English-speaking land, to use her mother tongue on a daily basis. Her family life was shattered, with her parents and sister living in London, their financial situation much reduced by the revolution, and her brother a suicide in Vienna.

Brian Boyd writes of “the whirlwinds of the soul natural to a Russian….” At times, these whirlwinds swept over us at home. Discussions on family issues became highly emotional. Mother slapped me when I received a low grade in Russian studies at college, feeling I had betrayed my heritage and embarrassed her. There was much slamming of doors at home to convey displeasure. Yet, through all this drama, mother was my greatest teacher, introducing me to an exciting, wide-ranging view of the world.

Father was born and grew up in Kentucky. Like many talented, ambitious young men from the south, he came north to attend Harvard Law School and then practice law in New York City. Mother and father shared interests in public affairs, literature, art, music and travel. Alas, in 1936, having just become a partner at his law firm, father died from a heart attack. Mother writes in her notes:

No sooner had I found the love and stability for which I was searching in an exceptionally happy marriage with a man twelve years older than I was, whose understanding and affection continue, in memory, to illuminate my life, than death brought this to an end, and I found myself once more alone, but this time with two children, a three-year-old daughter and a son who was born five weeks after the funeral. There was no time to mourn. What was needed was not lamentation, but unremitting work to keep our little family together – and this was a task not for a day, or for a year, but for a quarter of a century.

Determination and unremitting work in her chosen field of international relations as writer, editor, speaker and professor. Growing up, I accompanied mother on trips to Europe, Asia and Africa. Royalties from her book, “The Nature of the Non-Western World,” paid my expenses at Harvard College. How she loved her work!

[T]he work I had chosen to do became what, hopefully, all work should be – sheer, unadulterated joy, day in, day out. I can remember very few mornings in my life… when I have not awakened with keen anticipation of stimulating tasks to perform and interesting people to see.

Mother died at age 72. She never remarried. Of her time as a widow, she wrote, with discretion and elegance:

The heart line was broken, but it was not erased. New happiness came – not once, but twice, and each time with the rush of surprise and warmth that springtime brings after a bitter winter….

I had expected my 60th class reunion to be an emotional experience, seeing former classmates and walking through Harvard Yard past familiar buildings where decades ago I attended classes. And so it was, but never did I expect to come upon mother’s emotional outpourings on major events in her life. Loss of homeland. Life as wife and widow. Joy of work.