Dying for a better life 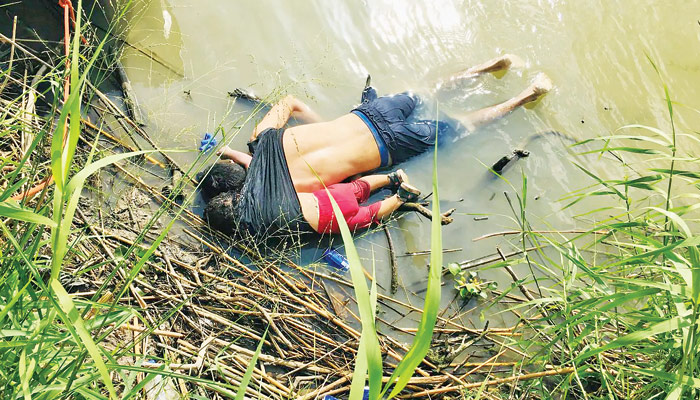 Aphotograph which was one morning splashed across the globe was indeed shocking. It was an image of a father with his 23 month old darling daughter. Both lay face down in shallow water along the bank of the river Rio Grande, at U.S.-Mexico border. His black shirt hiked up to his chest with the girl tucked inside. Her arm was draped around his neck. The family wanted safety, and opportunity, save enough to be able to buy a house back home. No intention to settle down permanently in USA. The photograph was a reminiscent of a 2015 photograph showing a three year old Syrian boy who lay drowned on a calm Mediterranean shore.

According to news reports Alberto Martínez Ramírez (25) with his wife Tania Vanessa Ávalos (21) and daughter Valeria had planned to ask for asylum in the United States. The father, a young and dynamic man, sold his motorcycle and borrowed money to move his wife, and daughter from El Salvador to the United States. The family reached an international bridge in Matamoros, Mexico and went to the U.S. Consulate, but they lost all hopes considering the legal procedures. The young family was desperate and standing so close on the Mexican side of the Rio Grande, America looked within reach. So they made the decision to cross the river. Alberto swam across the river with his daughter. He set her on the U.S. bank of the river and started back for his wife. But seeing him move away the girl threw herself into the water. Alberto returned and was able to grab Valeria, but the current swept them both away.

It is a spine-chilling image to see the girl’s arm on her father which reflects that until her last breath, she was joined to him by the shirt. In the flowing water it would have been very painful for the child to cling to her father. In that embrace they passed together into death. This image is a symbol of the large-scale humanitarian crisis.

Desperate for a better life there are scores of people who want to enter USA. However, President Donald Trump has made curbing illegal immigration a policy priority since his election. His zero tolerance policy is not only tough but against humanity. Let’s not go into details but by prosecuting adults who crossed the border illegally, it had the effect of separating children from their parents. The U.S. has also introduced a ‘metering’ policy under which asylum seekers wait in Mexico while their claims are processed in U.S. courts, a wait that could last many months or even years. However there is no guarantee that they will be allowed. As a result there are many humanitarian tragedies.

The US policy makes it impossible for refugees to come through the legal ports of entry. The 2,000-mile U.S.-Mexico border has long been in focus; last year 283 migrant deaths were recorded here. Rio Grande is the river that immigrants try to cross which is swollen most of the year with water released from dams for irrigation.

Every year millions of people are being forced to leave their homes. In the list is not only a Syria kind of conflict but top most is poverty and hunger. These are creations of the politicians. Besides there are people fleeing their land to escape from climate change-induced droughts, disaster, and inadequate conditions in their homeland. The reasons could be different but they share the pain of similar intensity.

According to a report released by the United Nations since the Second World War more than 70 million people around the world are now officially displaced from their homes by conflict, violence, and persecution. This figure does not include the vast majority of people who are displaced within their country of origin. How can we forget our own Kashmiri Pandits in India?

The migrants usually try to enter the neighboring countries. As it is not easy to enter with valid papers they chose the river or sea route. Another UN report says that in 2017, more than 170,000 migrants, including refugees, arrived in Europe by sea and close to 120,000 of them crossed the Central Mediterranean, most of them traveled on smugglers’ boats. This migrant route has recorded most deaths. Many go missing or get killed by security forces.

America is a nation of immigrants. With such images and its arm-twisting exercises across the world the country has lost its moral authority it had earned with its generosity since several decades. Many of the US citizen’s forefathers had moved to the place leaving their own country in search of a bright future. With such image ultimately US stands today naked, and in shame. US has so much to share but in its greed and selfishness it has been continuously raining war and while siding with one faction of two warring groups, it has in the process jeopardized the life of innocent people across the world. Whether it is Iran – Iraq, Syria, Libya, Afghanistan, Pakistan, you name it and they have a hand in it.

No matter who you are and which country you belong to but we all agree that Alberto Martínez Ramírez and his daughter Valeria should have had a chance for a better and happier life. On this planet we all have our own share. Dividing it in such manner is a cruel joke with humanity.