Passages From My Reading 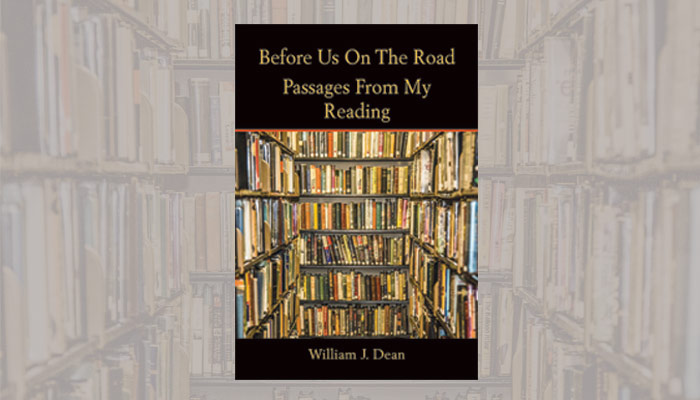 At age 25, while a student at law school, I began copying in journals, in longhand, favorite passages from my reading. I have continued to do so for the past 57 years. Two months ago, a collection of these passages was published in book form under the title,”Before Us On The Road, Passages From My Reading.” (Available from Amazon.com $15)

Vincent Van Gogh: “What am I in the eyes of most people? A nonentity or an oddity or a disagreeable person – someone who has and will have no position in society; in short, a little lower than the lowest….[T]hrough my work I’d like to show what there is in the heart of such an oddity, such a nobody.”

The Chilean poet, Gabriela Mistral. I read her poems standing on the bridge of the “Magallanes” as it made its way north along the Chilean coast through Pacific seas:
The fog has been thickening
into a bluish-grey blanket
and blinding the sea she steals
our clutch of archipelagos….
She blurs away Chiloe,
reaches down to Tierra del Fuego….

Camus in “The First Man”: “In Monsieur Germain’s class, they felt for the first time that they existed and that they were the objects of the highest regard: they were judged worthy to discover the world.” Upon receiving the Nobel Prize, Camus wrote his teacher, “[W]ithout your teaching, and your example, none of all this would have happened.”

Leonardo Sciascia, in “Sicilian Uncles”, writes of the priest who provided his schooling: “[N]ot only did he teach me to read from an alphabet, to write a letter and not get confused over figures, he also taught me to find faith and companionship in nature, books and my own thoughts.”

Michael Ondaatje: “At St. Thomas’ College Boy School [in Sri Lanka] I had written ‘lines’ as punishment. A hundred and fifty times…, I must not throw coconuts off the roof of Copplestone House…. We must not urinate again on Father Barnabas’ tires….For years I thought literature was punishment, only a parade ground.” (Among the poems I can still recite, most are from my detention days.)

Robertson Davies, “The Table Talk of Samuel Marchbanks”: “All the children must sing, and are divided by the teacher into canaries (the best singers), robins (fairly good singers), bluebirds (definitely not choral material), and pigeons (creatures who croak moodily upon one note.)” At my school, I established a new category. “Dean, you’re a croaker,” the music teacher grimly informed me, denying me the opportunity to sing with the school chorus at Carnegie Hall under the baton of Maestro Leopold Stokowski.

Leo Stein, brother of Gertrude, showed avant-garde paintings of Matisse and Picasso at Saturday Salons in Paris. He recalled proudly that cynics “came to mock and remained to pray.”

Venice is one of my favorite places on the planet:
There is a glorious city in the Sea,
The Sea is in the broad, the narrow streets,
Ebbing and flowing; and the salt sea-weed
Clings to the marble of her palaces….
Samuel Rogers

And wherever I go, I carry the name of Venice sculpted in my heart; I have always remembered Venice; I have always sought to return. Every comparison that I have the occasion to make makes me see this place as more beautiful, more magnificent…, and every time I return I have discovered greater beauties, and thus it will be also this time. Carlo Goldoni, “One of the Last Evenings of Carnival”

And so is Saint Petersburg:
Our separation is imaginary:
We are inseparable.
My shadow is on your walls,
My reflection in your canals….
Anna Akhmatova

I know that in this city where I have never lived, there had nevertheless been deposited by some strange quirk of fate – a previous life, perhaps? – a portion of my own capacity to feel and to love, a portion – in other words – of my own life; and that is something no American will ever understand and no Russian ever believe.

John Keats: In Rome in 1959, at age 22,having just graduated from college, I remember reading this marvelous letter of Keats, written when he was in his early twenties, looking forward to a walking tour in the north of England and Scotland that will “make a sort of Prologue to the Life I intend to pursue – that is to write, to study and to see all Europe at the lowest expense. I will clamber through the Clouds and exist.” The letter pierced my heart. He and I were about the same age and shared the same goals, but I knew, as he did not, that his life would be cut short at a young age.

A grasshopper landed on my shoulder smelled like a pine. I had become a pine.
Nikos Kazantzakis, “Report to Greco”

(A grasshopper, a relation, perhaps, landed on my shoulder as I walked in Crete through a pine-scented forest to the sea, and then into the sea fully clothed, seeking relief from the intense heat.)

“I love Antigone. She never struck a pose and waited for me to admire her. Mirrors meant nothing to her. She never looked at herself. She looked at me, and expected me to be somebody. And I was – when I was with her.”
Haemon in “Antigone” by Jean Anouilh

Language is like a cracked kettle on which we beat out tunes for bears to dance to, while all the time we long to move the stars to pity.
Gustave Flaubert, “Madame Bovary”

No, I shall not die entirely! And my soul,
My lyre will outlive aches and the void….
I shall long be deemed congenial
For having taught my voice to sing
Of noble hearts, and freedom in a
cruel age….
Alexander Pushkin


In his collection of favorite reading passages, “A Certain World: A Commonplace Book” (1970), described by him as a “sort of autobiography,” W.H. Auden writes, “Here, then, Is a map of my planet.”

Dear Reader, I present to you “a map of my planet,” a collection 57 years in the making – “Before Us On The Road, Passages From My Reading”- containing several hundred of my favorite passages.