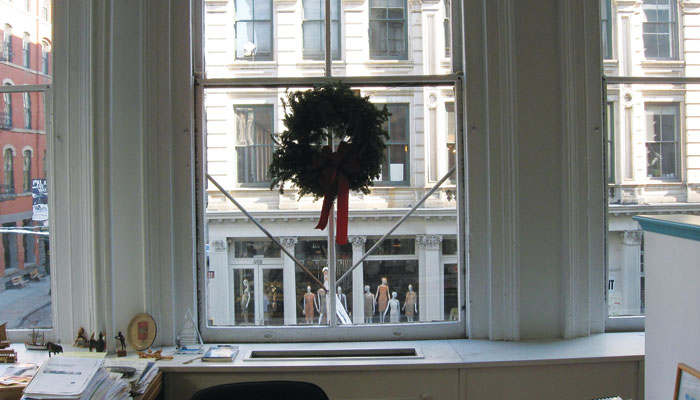 I have enjoyed three unusual downtown offices in New York City. First, the top floor of a warehouse in TriBeCa (short for the Triangle Below Canal Street); second, an office in a cast-iron building in SoHo (short for South of Houston Street); third, an office in the Flatiron District.

Selecting an office involves basic lifestyle decisions. From the start, I told the real estate agent that light and views were essential. I spend a lot of time at the office and have no desire to look out on an air shaft.

The essence of my job as executive director at Volunteers of Legal Service (VOLS) was working with major law firms to provide free civil legal services to poor people in New York City. This pointed to finding space in the Times Square / Grand Central Terminal area, near many of the large law firms. But mid-town Manhattan happens to be expensive. Instead, I chose TriBeCa on the West Side of Lower Manhattan. Specifically, a food warehouse at 17 Varick Street. The first fourteen floors of the buildings are filled with delectables: prosciutto hams, cheeses, pasta, olive oil, smoked fish and pate. A gourmet’s delight, but it was the views of Manhattan from the top floor, the 15th, where our office would be, that won me over to the space. We would see a river (the Hudson), two states (New York and New Jersey), three of the city’s five boroughs (Manhattan Brooklyn and Queens), and a number of the city’s most famous landmarks: The Woolworth Building, and looking north, the Empire State and Chrysler Buildings. Our street-level next door neighbor was a stable for police horses. When we moved in, on some days the sidewalk would be blocked by a truck delivering hay from upstate New York farms for our hungry neighbors who patrolled the theater district in the company of police officers. The aroma of freshly cut hay and the romance of horses: What a pleasure for this city-born boy! The officers let me visit the horses.

Visitors to our office found it both unusual and delightful, including members of the Board of Directors, among them, our chairman, Cyrus Vance, former Secretary of State. How these quarters must have differed from the hallowed halls of the Department of State in the nation’s capital. Fortunately for VOLS management – namely, me – the elevator did not break-down that day.

Alas, 17 Varick Street in time attracted the attention of real estate investors. Surely, they reasoned, more money could be made in ways other than having a huge building occupied by a food warehouse and a few lawyers sitting on the 15th floor, with horses as downstairs’ neighbors. In due course, windows were punched into the warehouse walls and the building transformed into an elegant living space of condominium apartments. Long before, we were out on the street, having reluctantly packed our bags and headed north across Canal Street, moving ourselves into another neighborhood: From TriBeCa to SoHo, our new home being at 54 Greene Street on the corner of Broome and Greene.

From my desk on the second floor at 54 Greene Street, I look upon surrounding cast-iron buildings. The original 1870 glass in our large windows created a wrinkled distortion: looking out, an Impressionist painters’ dream. We had a 19th century view of our 21st century city. Water towers on the roof. Sidewalks teeming with life. In this mixed use building, children and dogs share the elevator with us, making for lively encounters. The sidewalks are granite, not cement. Streets of paving stones. Bishop’s crook lampposts. The creative juices of SoHo abound, with filmmakers across the street paying us $120 to keep our office lights on for film-making at night. Passing a subway newsstand, my eye is drawn to a familiar scene. Could it be? Yes, it is! On the cover of “The New Yorker” magazine is portrayed the facade of 54 Greene Street: The very windows that I look out from by my desk.

In a normal office building, management services are provided. Not in the ones I select! Thus, in addition to performing the normal duties required of an executive director, I climb a ladder to change light bulbs. This is no ordinary ladder, for the ceiling in this cast -iron building is 16 feet high. When I reach the top, being tall, I am face to face with the original stamped-tin ceiling; I try not to look down, having little fondness for heights. A colleague hands me the new bulb which I insert. I change the water-cooler bottle in the supply room. I find it a constant wonder to see how such a small office can generate so much paper. I drag the plastic bags filled with paper to the street below for garbage pickup. Questions I ponder: Why does the elevator not work on certain days? I believe it dislikes very cold weather. Why does the doorbell ring when there is no one there? Activated by a passerby on the street using a cell phone?

Being on the second floor, I like having the office relate positively to the street below. This means placing a flower box on the window ledge in spring and summer. I get into trouble when I hang an American flag on the window flagpole, being informed by the landlord that SoHo rules limit flag flying to company flags. (This seems crazy to me.) I enjoy conversing with the window cleaner, contractors, electrician, mail carrier and locksmith.

All this socialibility came to an abrupt end one summer day in the fourteenth year of our tenancy when the owner tells me that our lease would not be renewed. And so began the tedious task of finding a new office. After viewing numerous unremarkable spaces, my colleagues and I come upon a building at 281 Park Avenue South, at 22nd Street, owned by the Federation of Protestant Welfare Agencies. According to a Landmarks Preservation Commission report, this 1894 building “takes its form from the great Medieval and Renaissance town halls and guild halls of Belgium and Holland.” How this little organization has travelled chronologically, going back in time, from a present-day warehouse to a 19th century cast-iron building to Medieval and Renaissance times, but traveling geographically only about one-half mile north.

A week or so after our move, on the excuse of checking the mail box at the old office, I returned to 54 Greene Street. The office walls already had been knocked-down for the new tenant. My battered wooden desk, used by me in the two earlier offices for 23 years, but too large for the elevator in the new place, stood forlornly in the empty space, abandoned, covered with plaster dust. To have returned was a mistake.

I spend my first few days at the new office prowling through the neighborhood like a forest animal intent on creating a new lair. It turns out to be a pretty nice lair. Gramercy Park is a block away. Nearby are the Flatiron Building, Madison Square Park and the courthouse of the Appellate Division, First Department, where I had been sworn-in as a lawyer decades earlier. I visit the Greenmarket Market at Union Square to purchase fresh corn. Years ago I served as a volunteer legal adviser to the Greenmarket. On occasion, I had been “rewarded” with fresh fruit and vegetables – a return of the barter economy to the hedge fund capital of the world. I begin to feel there will be life after SoHo.

With the help of colleagues, I place on the wall by my desk pictures of favorite writers. Chekhov did the same. His favorites: Pushkin, Tolstoy and Turgenev. In their presence, Chekhov was inspired. At my desk, far less enduring prose emerges. Let me conclude with Chekhov:

Life is only given us once, and one wants to live it boldly, with full consciousness and beauty.
“An Anonymous Story” 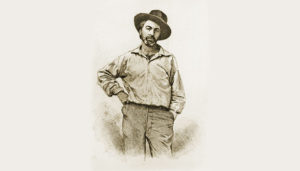