“Going beyond limits” to achieve a set objective 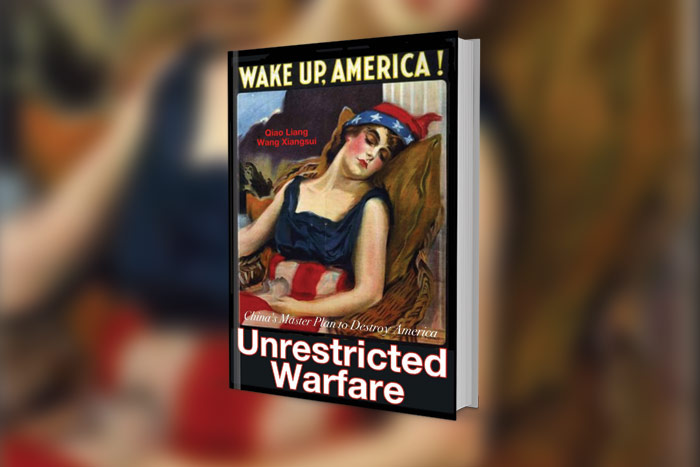 Ashok Jainani revisits the pages of Unrestricted Warfare, a book on military strategy written in 1999 by two colonels in the People’s Liberation Army, Qiao Liang and Wang Xiangsui.
The thrilling account of strategies explains how a militarily and politically disadvantaged nation can defeat a technologically superior opponent like the United States through a variety of means.

Who has seen tomorrow’s war? No one. However, its various scenes have passed through the mouths of many prophets and have been imprinted on our mental screens. From the strangling warfare of satellites in space to the angular pursuits of nuclear submarines in deep oceans; from the precision bombs released by stealth bombers to the cruise missiles fired by drones, they cover the heavens and the earth, and they can be said to be too numerous to enumerate.

Unrestricted Warfare, written by two Chinese PLA colonels is a thrilling and meticulous account of strategies that militarily and politically disadvantaged nations might take in order to successfully attack a geopolitical super-power like the United States. American military doctrine is typically led by technology; a new class of weapon which encourages an adjustment in existing strategy. Authors and military strategists Qiao Liang and Wang Xiangsui argue that this dynamic is a crucial weakness in the American military thinking, and that this blind spot with regard to alternative forms warfare could be effectively exploited by enemies. Unrestricted Warfare concerns the many ways in which this might occur, and, in turn, suggests what the United States might do to defend itself.

The 21st Century great masters of warfare will be those who employ innovative methods to combine various capabilities “exceeding the limits” so as to attain tactical, campaign and strategic goals. A combined war that goes beyond limits, unrestricted in time, space and extent.

EVERYTHING IS CHANGING. Authors believe that the age of a revolution in operating methods, wherein all of the changes involved in the explosion of technology, the replacement of weapons, the development of security concepts, the adjustment of strategic targets, the obscurity of the boundaries of the battlefield, and the expansion of the scope and scale of non-military means and non-military personnel involved in warfare are focused on one point, has already arrived. This revolution is not seeking operating methods which coordinate with each type of change, but rather is finding a common operating method for all of these changes. In other words, finding a new methodology which uses one method to deal with the myriad changes of future wars.

Authors have identified several major factors that may have contributed to this change. First, the decline of state-sponsored military violence due to the mounting constraints of international conventions (forbidding the use of weapons of mass destruction (WMD), landmines and the killing of civilians) and increased military professionalism and technological precision strikes that reduce collateral damage. It’s particularly foolish for a challenger to confront the US on conventional military terms. Similarly, the almost total concentration of the US military on the narrow military technological domain may provide windows of vulnerability that can be exploited by a challenger. Secondly, global trade and economic integration may have created conditions that may render unrestricted warfare more likely. The weakening of the nation-states, for instance, may allow for multiple interests, identities, space, goals and actors, and therefore the more likelihood of non-state conflicts.

It may also lead to the declining constraints of state-based rules and limits on non-state actors. Globalisation may have also created vulnerabilities for the vested interests and opportunities for the challengers. The easier transnational flow of capital, for instance, makes it easier to wage financial warfare and raise funds by non-state actors.

The traditional mentality that offensive action is limited to military action is no longer adequate given the range of contemporary threats and the rising costs-both in dollars and lives lost. Authors suggest the significance of alternatives to direct military confrontation, including international policy, economic warfare, attacks on digital infrastructure and networks, and terrorism. Even a relatively insignificant state can incapacitate a far more powerful enemy by applying pressure to their economic and political systems. Exploring each of these considerations with remarkable insight and clarity, Unrestricted Warfare is an engaging evaluation of our geopolitical future.

The advances and diffusion of technology provide the opportunities for non-state actors to get access to and employ dual-use technologies for warfare. Loosening of immigration rules can be exploited for transnational training and deployment and the freer flow of information makes it easier to wage information warfare to amplify the effects of attacks. The government rules for narrow self-interest groups also increase the chances for non-government actors to break those rules and engage in warfare to constrain government behavior.

Authors advocate that unlike the “weapons of new concepts,” which motivate technological innovation in the narrower military field, what drives Unrestricted Warfare is the “new concepts of weapons,” i.e. ways and means that are non-military but can be employed as weapons for warfare to achieve political objectives.

In the history of war, there has never been a victory achieved in a smooth manner. The “rules of victory” are hidden in the waves of military practice of mankind. They are there; like an invisible man, they accompany every war of mankind. The party to which their golden fingers point will go through the arch of triumph by stepping on the sorrow of the vanquished. However, even the victors in war have not truly seen their real faces (understood or acknowledge those rules). Discovery of the rules of victory can deepen people’s knowledge of the laws of warfare, and increase the standard by which military arts are practiced. But on the battlefield, the victor will certainly not have won because he has detected more of the rules. The key will be which contender truly grasps the rules of victory in their essence.

The expression “to exceed limits” means

to go beyond things which are called or understood to be boundaries. It does not matter whether they fall into the category of physical, spiritual, or technical, or if they are called “limits,” “defined limits,” “constraints,” “borders,” “rules,” “laws,” “maximum limits,” or even “taboos.” Speaking in terms of war, this could mean the boundary between the battlefield and what is not the battlefield, between what is a weapon and what is not, between soldier and noncombatant, between state and non-state or supra-state.

The real meaning of the concept of “exceeding limits” which authors propose is, first of all, to transcend ideology. Only secondarily does it mean, when taking action, to transcend limits and boundaries when necessary, when they can be transcended and select the most appropriate means (including extreme means). It does not mean that extreme means must be selected always and everywhere. In this technologically integrated era, there are actually more facts to consider now, an abundance of usable resources (meaning all material and non-material resources), so that no matter what limits military people face, there is always a means which can break through those limits.

He who wants to win today’s wars, or those of tomorrow, must “combine” all of the resources of war which he has at his disposal and use them as means to prosecute the war. And even this will not be enough. He must combine them according to the demands of the rules of victory. Even this will not be enough, because the rules of victory cannot guarantee that victory will drop like ripe fruit into a basket. It still needs a skilled hand to pluck it. That hand is the concept of “going beyond limits,” surpassing all boundaries and conforming with the laws of victory when conducting warfare with combinations. Thus we obtain a complete concept, a completely new method of warfare called “modified combined war that goes beyond limits.”

“Going beyond limits” certainly does not equate to “no limits,” but only to the expansion of “limits.” That is, to go beyond the intrinsic boundaries of a certain area or a certain direction, and to combine opportunities and means in more areas or in more directions, so as to achieve a set objective. That according to the Unrestricted Warfare is the definition of “combined war that goes beyond limits,” unrestricted in time, space and extent.