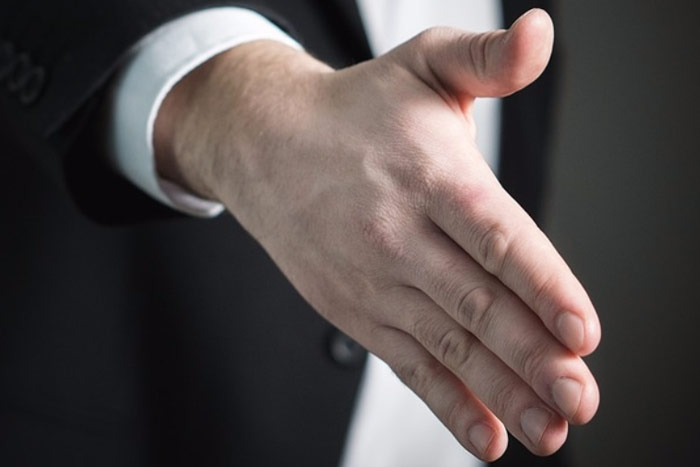 I always love to shake the hands of writers. When I do so I say, “It’s nice to shake the hand that writes” and love to see an expression of joy flit across their face. And women writers invariably say, “Oh! Pleasure is mine”. Well said! Perhaps their silky soft palm squirms at the touch of man’s, hard as the palm of ploughman.

“…Other parts of the body assist the speaker but the hands speak themselves. By them we ask, promise, invoke, dismiss, threaten, entreat, deprecate. By them we express fear, joy, grief, our doubts, assent, or penitence; we show moderation or profusion, and mark number and time”, said the Roman rhetorician Quintilian, in his Institutiooratoria (Training of the Orator), a treatise that every would-be public speaker should study. People like to hold hands and feel the warmth they have for each other. It also means, “I can’t let you go away till I finish…so listen”. In village markets, the seller and the buyer of bovine breeds hold hands and haggle under cover, a sash or a kerchief keeping the secret. Certainly the hand, that member of the body which we employ more than any other for most actions, is the mind’s only perfect vassal.

Among the two, we human beings are blessed with, the right hand is considered more important than the left. In any court of law the oath is made by holding up the right hand. And it is the right hand that shakes another’s right hand to find how healthy they are. Like we Indians, the Arabs too do not allow the left hand to touch food. Is it because we use the right for the upper mouth and the left for the under mouth? Note the idiom ‘left handed compliment’.

Sometime in 1628 one Reverend Father Edmund Arrowsmith was executed at Lancaster. His crime was being true to his faith. But the dead man’s hand, believed to possess peculiar healing virtues, was kept in a Roman Catholic Church in Lancashire for centuries. Pilgrims from several parts of the country visited the church to seek healing from the touch of the ‘holy hand’. While it is true that many possess that degree of personal magnetism that they can relieve pain of nervous origin, it is also true that the power and sensitiveness of the hands of some people are very extraordinary. Milligen talks of a blind pensioner in his work on The Passions. Simply by touching a woman’s hands and nails the blind man “could infallibly assert if she were a virgin. Several tricks were played upon him and even wedding rings were placed on the fingers of young girls but he was never at fault”. Perhaps a mysterious link exists between the hands and the brain! An old nursery rhyme too sings of a certain popular belief about our hands:

Oh, our poor hands! We can’t rub our hands anymore on anything. No more can we feel the warmth others have for us. I can’t anymore shake the hand that writes, especially those silk-soft ones. Who is going to sell or buy a cow in the village market? Left hand or right hand…it is not going to be a compliment for us or others.

Cursed be the Coronavirus, for that stupid pandemic has made even the touch of the hands of others repellent and obnoxious to us. The very clasp of the hand is enough to kill us, inform the soap sellers who market also sanitizers. Worst of all we can’t get blessings from our elders for it is reported that the virus loves the aged ones sitting and relaxing at home and also the very active primary school going wee-ones. “Wash your hands…wash your hands in the way they deserve to be washed…” blare the voice of the TV actors dressed as physicians. The washing of the hands in public was prevalent from Roman times. It was significant of removing all possibility of guilt. It was also a token of innocence with regard to any crime. Had not Jesting Pilate washed his hands off Jesus, the Lord would have remained uncrucified.

Well! Well! The time is not far when the world would forget the art of shaking hands and resort to Our Indian way of saluting – our palms joined together.