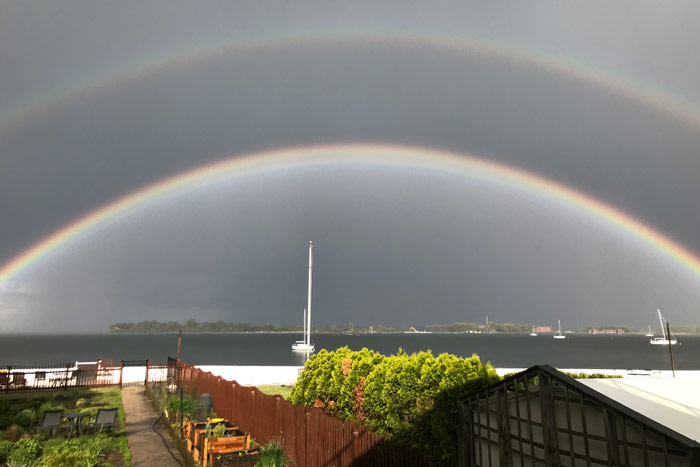 The arrival of the Coronavirus in New York City has been devastating. How devastating? Here are the figures as of May 17: 190,408 positive cases identified; 50,120 hospitalizations required and 15,888 deaths.

From his “COVID Journal, Harlem Hospital,” kept by Dr. Stephen W. Nicholas: New York’s first case of COVID was confirmed March 1. By March 13 there were over 1000 cases. I received a query from New York State sent to all retired physicians, asking them to reactivate their medical licenses and take on COVID-related duties. Imagine my surprise when I was assigned to Harlem Hospital, where as you know, I was on staff for 25 years of my career, seven as the Director of Pediatrics.

The normal maximum inpatient adult census at Harlem Hospital is 160. Now, nearly all the hospital has been converted into COVID care units, and the total census is over 350. Almost all these areas function like ICUs. The death rate is staggering. One nurse I talked with had four patients die on one shift. Another walked into a four-bed room to find that three of the patients had died. The morgue is rumored to be backed up 100 corpses.
Refrigerator trucks store dead bodies.

The COVID-19 pandemic is devastating, far more than the bleakest moments of the early AIDS epidemic. However, the fundamental moral equation that drives doctors and nurses to do their best for their patients is stronger than ever. Tough-minded optimism prevails here in the trenches of Harlem….

I have good news to share with you today. The first COVID death in New York City occurred 65 days ago on March 11. And then, there was an explosive onslaught of hospitalizations and deaths [in the city], peaking April 7 when 577 people died in one day. Since then, the death rate has tumbled steadily down to a handful per day… Today I am cheering, for the worst of Wave One is over. What lies down the road, like everything associated with COVID-19, is a great unknown.

The immense need for mental health support [for the medical staff] has become apparent. Many individuals have already manifested the signs and symptoms of post-traumatic stress syndrome. Without doubt, it will affect many more workers who have endured the death of patients, colleagues, family members, or friends, in tandem with long hospital hours, sleep loss, and a nearly unbearable workload (not to mention those who themselves became COVID infected, recovered, and returned to work.) I’m sure of only one thing: many of the young nurses and doctors and other health care providers who have been through this terrible ordeal will be tomorrow’s leaders in medicine.

Because of the higher than expected number of New Yorkers infected by the virus requiring hospitalization, health officials called upon hospitals to increase the number of beds and Intensive care units. This led the Mount Sinai Health System to team up with the evangelical relief group, Samaritian’s Purse. In a short time, a 68-bed field hospital was set up in the East Meadow in Central Park, just off Fifth Avenue, between 98th Street and 99th Streets, with ten intensive care units. (To accomplish this was remarkable, since Central Park is considered sacred land, tolerating no intrusion by outsiders.) Samaritian’s Purse earlier had provided valuable relief work in the Congo to combat Ebola fever and diphtheria in Bangladesh.

During the month of April, 315 patients received medical treatment in the field hospital. Their work was described by Mount Sinai colleagues as being at “the highest level of care and compassion for the patients.”

On Easter morning, I visit the East Meadow. Much of the meadow is occupied by the tent hospital. I know every tree and rock on the meadow, having attended St. Bernard’s School, located on 98th Street, and lived in the area. St. Bernard’s introduced me to the worlds of English literature and soccer, having been founded by two Englishmen who met when colliding in a soccer match and became best of friends and co-founders of the school. Most days, we, the boys, crossed Fifth Avenue to enter the park to play soccer. In the words of the school “Football Song”:

So pass and kick,
And dribble and trick
And merrily chase the ball…

My favorite game was against the Masters, as we referred to our teachers in the English style. The Masters had skill and experience, but eighth-graders have speed and boundless energy, so games were surprisingly close.

On the fence surrounding the field hospital, I come upon a bouquet of flowers. Appended to the bouquet is a note reading, “Take Heart.” A wonderful message: “TAKE HEART,” – you the patients/ health care providers/ families/ friends.


On many days in April, the daily death toll from the Coronavirus in New York City numbered in the hundreds. The higher than expected death rate resulted in having to use Hart Island, the city’s Potter’s Field, for the overflow. Potter’s Field has been the city’s burial place for paupers and unclaimed dead since 1869.

Until recently, sentenced inmates from Rikers Island, the city jail, performed burial duties. The inmates were brought by bus from Rikers to City Island to board a ferry for the short trip to Hart Island. There they placed pine wood coffins in eight foot deep trenches in three coffin high columns extending 150 feet and then covered the coffins with earth.

On my visits to Hart Island, the most surprising thing for me was to come upon a place resembling a New England coastal scene. Fog, buoy bells, fishermen in boats on Long Island Sound, mussel shells washed ashore at high tide, swamp grass swaying in the breeze, wild ducks, Canadian geese. With the Coronavirus, Hart Island has become a busy place. Prisoners have been replaced with workers from a private contracting firm. Lucy L. Brown, a neuroscientist and observer of Hart Island from across Long Island Sound, wrote me of the increased activity, with many more ferry and truck trips “and steam shovels digging the grave-trenches. This has been sobering and I have thought a lot about death. But the presence of death has been co-existing in my visual field with Spring and my garden, where many green shoots are pushing up from the ground. The miracle of rebirth in Spring right here in my own back yard has been especially obvious to me with the backdrop of so much lonely death represented on Hart Island.”


What is life like for New Yorkers in this time of the virus? If you are ill, or a family member or friend of someone who is ill, it is hell. If you have lost your job as a result of the virus, it is hell. The ill and jobless comprise a lot of New Yorkers! So far I have escaped both categories, making me a very lucky person.

In New York, we are admonished by local authorities to “stay at home,” leaving home only for necessities, like medical care and food. To do so is basically voluntary, relying on the good sense and civic spirit of the populace. If you choose to play the fool and go outside for other reasons, as I occasionally do, chances of my being fined or arrested are very low. It is what I call a “soft admonition” as opposed to “lock-down” Indian style.

I am not exactly the law-breaking type. For the most part, I stay put and work in my apartment. But if the day is sunny, with Central Park only three blocks away, you will find me on a park bench enjoying the warmth of the sun and a refreshing breeze.

My apartment building requires residents to wear masks in the elevator, hallways and lobby. I strictly abide by this rule, since I don’t want to have angry neighbors. (Many have left the city, not to return to their village on foot, but to drive to their country house.) A number of grocery stores require the wearing of masks. I abide by this because if they were to close, we would all be in deep trouble. I keep my refrigerator and shelves full. But on the street, I lower my mask if no one is around and I observe the 6 foot separation rule.

My office is closed, so I stay pretty much in the neighborhood, walking most places. I take an occasional bus. Buses are now free. This is because the front door is no longer opened by the driver. You enter by the back door and have no contact with the driver, there being a chain placed across the aisle a few rows back to prevent this.

The subways are running, but very empty, and for the first time in its history, shut down between the hours of 1 a.m. to 5 a.m. for intensive cleaning to encourage riders to return. Ridership has declined dramatically, with huge financial losses. Large numbers of transit personnel have come down with the virus. So many aspects of our lives have been affected. Schools closed. The Broadway fall season cancelled. Businesses, large and small, are vanishing. Tourism has been hard hit. The impact on city finances will be huge. The streets are eerie, with stores closed, many, I fear, never to reopen.


My favorite time of day: 7 p.m. Each evening, at this time, from apartments and street, New Yorkers spontaneously honor hospital care workers with cheers, clapping, bell-ringing, whistle – blowing, pot-banging. Passing ambulances, fire engines and police cars, red lights flashing, join the tribute. One night on a street, near my apartment at 73rd and Lexington, I hear, but do not see, a trumpet player. He concludes his playing with “Amazing Grace” and the “Ode to Joy” theme of Beethoven’s Ninth. I am his audience of one and vigorously applaud. The unseen player acknowledges my presence by waving the trumpet from a sixth floor window. We establish a moment of fellowship at a time fostering distance.